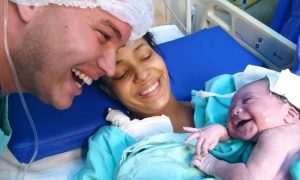 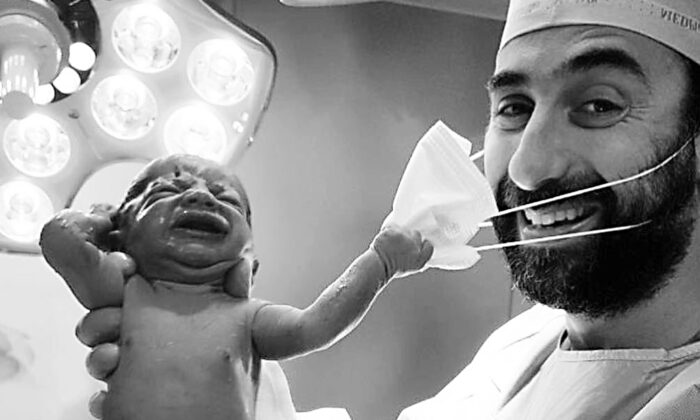 A photo of a spirited newborn yanking off his doctor’s face mask has gone viral on Instagram.

“I never thought I would get such an overwhelming response to the picture. It was such a spontaneous response from the baby,” Cheaib told Gulf News. “People warmed up to it because it is portending the end of COVID-19.”

“Everyone wants to take off the mask soon, and who knows, we will be able to soon,” he said.

Cheaib, a maternal-fetal medicine consultant at Dr. Fakih’s IVF clinic in Dubai, told the outlet that he delivered the baby, who is the second in a pair of twins, a couple of weeks ago.

“The delighted father was taking pictures of me holding each baby,” Cheaib said.

The second baby “just yanked my mask off,” he said, and the father snapped a photo at exactly the right moment.

Cheaib, a 42-year-old Lebanese expatriate who adores babies, saw a message of hope in the infant’s impulse to snatch his mask away. He decided to share the photo on his personal social media account—and it went viral.

Despite the fact that Cheaib works at a fertility clinic, the twin babies were conceived naturally. According to his bio, Cheaib specializes in high-risk pregnancies as well as twin and triplet pregnancies.

“Still too early unfortunately!” wrote another, adding, “what a beautiful picture … babies form their identity in the womb, this little guy definitely will hate wearing a mask.”

Cheaib told Gulf News that the photo is certainly making people smile. The doctor firmly believes that smiles and positivity can help boost immunity, and ultimately, help combat the pandemic.

“The little newborn wanted a world without masks,” he ventured, “and very soon we might have this.”