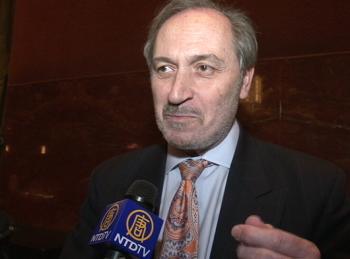 Chryssanthos Petsilas, the director of the Greek National Tourist Board in the United States, was in the audience.

"The program flows very, very well," he said. "Even although they tell you in detail the history of each piece, the spectators don't get tired—the interest keeps up."

He added that the overall performance from the New York-based Shen Yun "is very impressive."

Shen Yun's performers use classical Chinese dance, which is a vast artform that has movements ranging from flips, turns, tumbles, to graceful hand gestures.

"For us, which is the the first time, it is very very enjoyable and I hope we will see something similar in the near future," Mr. Petsilas added.

The Message of Hope That Shen Yun Brings

He spoke of his feelings upon seeing the Shun Yun performance and the message of hope that it brought.

“Well my impression is wonderful …I think that the whole show is like a lot of hope that all humanity has been waiting and longing for … like a coming of a life or the truth … I think that’s very wonderful. In the show there's a lot of ups and downs, but eventually at the end, it shows that goodness will absolutely prevail.”

Rev. Morales went on to say that he felt a "true or heavenly spirit" was present in his experience.

Rev. Morales had come to the show with a group of 20 people. Andrea, a member of his party, also praised the beauty of the show. She likewise commented on the conflict between good and evil that is presented in the show and was pleased that the good side won.

With reporting by Kevin Peng and NTDTV.

Shen Yun Performing Arts Touring Company will perform next in Rochester, New York at the Rochester Auditorium Theater on Feb. 27 and Feb. 28.