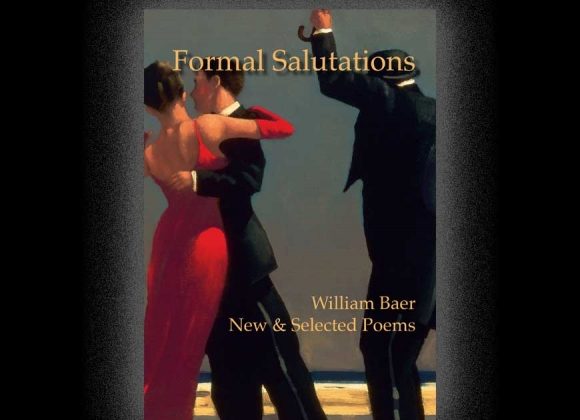 An introduction to William Baer
By Jeff Minick

For a good number of years, I attended various poetry readings. Some were wonderful, some mediocre, and two were disasters that remain seared in my memory.

In Boston in 1976, in a bookstore whose name I have long forgotten, a poet, whose name is also lost in time, read incomprehensible verse for almost an hour. Like the bookstore and the poet, her abstract ramblings have gone missing from my memory. What I do recollect is sitting in a crowded room, wedged between people on a bench, with no possibility of escape, perspiring, claustrophobic, tortured by a river of unintelligible words. When at last I set foot in the street, I gulped air into my lungs like a submariner touching shore after months at sea.

My second such incarceration occurred about five years later in a room above a bar in Charlottesville, Virginia. Here the staff had pushed together several tables, and a group of us sat round them and listened to a man in his late 20s read his verse. Again the words were like the earth in Genesis, “without form and void,” and again the seating arrangement eliminated the opportunity to slip away. Pitchers of beer on the tables did alleviate some of the pain, and I remember the poem involved riding a motorcycle. I recall, as well, some mention of shattered glass, so somewhere in that jumble of words the motorcycle may have crashed.

Perhaps if I had read the words of these poets, I might have understood their work. But poetry is a spoken art, meant for recitation or reading aloud, to enter the ear of the listener and so sway the heart and mind. The lines delivered by these two poets entered the ear, but without effect.

Nearly 30 years ago, The Atlantic published an article “Can Poetry Matter?” in which it addressed the demise of poetry’s influence on our culture. Poetry, the article points out, “has become the specialized occupation of a relatively small and isolated group.” As a result, “a ‘famous’ poet now means someone famous only to other poets.”

To corroborate this decline in poetry’s influence on the culture at large is easy. Ask your family members or friends to identify a living poet. In the middle of the 20th century, Robert Frost, Carl Sandburg, Edna St. Vincent Millay, and Dylan Thomas were household names. How many people today could identify the 78-year-old Billy Collins, whom The New York Times once dubbed “the most popular poet in America”?

Some might give a nod to Bob Dylan, who won the Nobel Prize in Literature in 2016 for “having created new poetic expressions within the great American song tradition,” but the label that first comes to mind as a description of Bob Dylan is songwriter, not poet.

In addition to its turn toward abstraction and specialization, poetry lost some of its broader appeal by shifting away from meter, form, rhyme, and other devices. Our hearts and minds dance to the rhythm and beat of words. Children memorize nursery rhymes with ease, and adolescents and teens, at least as I observed them as a teacher, take far greater pleasure in poems like Kipling’s “If” or Robert Service’s “The Cremation of Sam McGee” than in, say, William Carlos Williams’s “The Red Wheelbarrow.”

Of course, some contemporary poets have continued working in traditional forms, employing rhyme, and meter, and aiming their poems at all of us. One of these is William Baer, a poet, novelist, and playwright, the recipient of numerous literary prizes, and the founding editor of The Formalist, a literary journal that helped bring about the New Formalism movement among poets.

In his 2018 “Formal Salutations: New & Selected Poems,” Baer treats his readers to poems in blank verse, villanelles, sonnets, terza rima, couplets, and other forms. Along with this banquet, he serves up translations, parodies, ballads, love sonnets, poems inspired by the Bible, and verse about topics ranging from issues of national importance to the antics of children.

Baer is a writer of many literary gifts, including his ability to surprise readers. Here, for example, is “Conspiracy,” a sonnet befitting the times in which we live:

You know the truth about the suicide
of the emissary’s wife, the cocaine bust
in Venice, and the plagues at Passiontide.
But whom can you tell? Whom can you really trust?
Desperate, you fly to Washington, D.C.,
to your ex-lover. “Meet me anywhere.”
“Of course,” she says. “Let’s meet at N.S.C.”
Later, walking from McPherson Square,
you start to tell her on the Mall, but “No,”
she puts a finger to your lips. “Don’t say
a word. Please. I really don’t want to know.”
Instead, she kisses your mouth: you pull away.
You check your watch. It’s two a.m.
There’s not much time. Your love is one of them.

Baer’s narrators range from a “bad girl” who “drives with her headlights off at night” to a man we first mistake for a peeping Tom, from a drug pusher to Dante, from a “little boy who couldn’t rhyme” to a telephone psychic.

Let’s end our brief visit with William Baer with one of the most moving and beautiful pieces in “Formal Salutations,” “The Swimming Pool Float”:

He remembers, before she died last May,
watching her as she slowly blew-up and inflated
that circular reddish float, puffing away,
as their eager little children waited.
He recalls her love, her yellow bathing suit,
that every breath we take in the summer breeze
contains some fifty-million super-minute
molecules once breathed by Sophocles….
Tonight, holding the float, when the night is cool,
he moves her chair to exactly the same place,
opens the valve, and sits beside the pool,
then feels her breath rush gently over his face,
alone with loneliness, alone with death,
he inhales her last remaining breath.

Poems have been reprinted with permission from their author.

Jeff Minick has four children and a growing platoon of grandchildren. For 20  years, he taught history, literature, and Latin to seminars of homeschooling students in Asheville, North Carolina. Today he lives and writes in Front Royal, Virgina. See jeffminick.com to follow his blog.