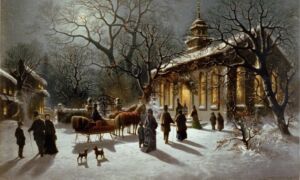 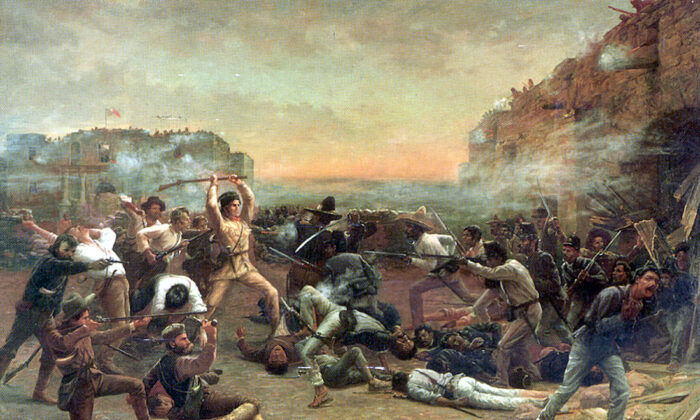 Famous painting of the last stand made at the Alamo. “The Fall of the Alamo,” 1903, by Robert Jenkins Onderdonk, depicts Davy Crockett wielding his rifle as a club against Mexican troops who have breached the walls of the mission. (Public Domain)
Literature

Throughout history, men with their backs to the wall have time and again fought against overwhelming odds rather than surrender to their enemies. Why do they die battling to the last? What force drives them to fight on with rocks and fists after the blades of their swords are broken or their rifles are empty of bullets?

In the book “Last Stands: Why Men Fight When All Is Lost,” Epoch Times columnist Michael Walsh raises these questions and others. Listen, for example, as he asks: “What is heroism? What are its moral components? Is it altruism, love, self-sacrifice? What are its amoral components—fear of cowardice, lust for glory, pride? Why was it once celebrated, and now often dismissed as anachronistic at best, foolish and vainglorious at its worst?”

Throughout “Last Stands,” Walsh explores these topics by an examination of 17 battles ranging from Thermopylae in 480 B.C. to the brutal 1950 engagement between the United States Marines and the Chinese communists at Korea’s Chosin Reservoir. In addition to his fine descriptions of these conflicts, Walsh provides excellent brief histories of the events that foreshadowed these last stands and their consequences, and short biographies of the commanders involved.

In each case study, Walsh also discusses what inspired these soldiers to make the supreme sacrifice.

Given the current unrest in our country, understanding the motivations of these warriors may prove instructive and rouse us as well to fight the good fight.

When George Custer led troopers of the Seventh Cavalry to the terrible massacre at the Little Bighorn (1876), he made several mistakes. He divided his force in the face of the enemy without careful reconnaissance; he depended on subordinate commanders who proved weak and disobedient; and worst of all, he believed that the Sioux and other warriors would run from the cavalry as they had in the past.

Instead, the Indians attacked and slaughtered Custer and his men, many of whom were poor shots, inexperienced riders, and ill-trained in military maneuvers. Outnumbered and overwhelmed, most of them went down fighting, but for no other reason than that they had no choice. Surrender was impossible, for to be taken alive meant death by torture. Some of the Sioux later reported that several of the soldiers committed suicide for fear of falling under the knives of the women.

As a last stand, the Little Bighorn is the most ignominious of Walsh’s examples. The soldiers who died in that short battle went to their deaths neither for hearth and home nor for a cause larger than themselves. Here in this desolate place, both Custer and his men and the combined forces of Native American tribes—the Little Bighorn marked the beginning of the end of their resistance—made their last stands.

Walsh makes the point in “Last Stands” that men will go their deaths for their country, not so much for ideals like democracy but for the realities of their homes, their towns and farms, and their loved ones. We hear little these days of “Mom, the flag, and apple pie,” but soldiers throughout our history have given their lives for these values. They die for what they love.

When Hannibal and his forces crushed the Roman legions at Cannae (216 B.C.), surrounding them so that the packed legionaries could barely move and were cut down, so many were lost that nearly every family in Rome went into mourning. Yet the senate and the people of Rome never considered surrender. They raised another army, devised different tactics, subdued Carthage, and became rulers of the Mediterranean.

“Patria,” which gives us “patriot,” is the Latin word for “country,” and the Romans at that point in their history revered that idea. As a result, they lost a battle but then won a war.

We who love our country, who believe in its ideals of liberty and justice, might take a metaphorical lesson from those events. The election may be behind us, but we can still win back America.

Both William Travis of Alamo fame and Charles George “Chinese” Gordon, who died defending Khartoum in 1885, had the opportunity to retreat before commencing battle, yet both men felt compelled to stand at their posts in the face of enormous odds. As Walsh writes of those at the Alamo (1836), “They died for those most abstract and yet most fundamental of concepts: duty, honor, country.” Gordon also died for these values, though his countrymen at the time were the Sudanese people as well as the English.

In the 1863 Battle of Camarón, a tiny band of French Foreign Legionnaires fought against a superior Mexican force. “The Mexicans were fighting for their country,” Walsh tells us, “the legionnaires were fighting for their honor.” One motto of the Legion, even today, is Legio Patria Nostra—“The Legion is our country”—and that day, the legionnaires nearly all gave their lives to remain true to that idea. The battle ended when the last six men still on their feet charged with their bayonets into the Mexican ranks. Two of them were killed, one was badly wounded, and the other three were captured.

To this day, the French Foreign Legion remembers and honors those men with a formal ceremony on April 30.

Soldiers such as these, and others whom Walsh examines, remind us that we too have a duty to our country and to the preservation of our institutions, that we should acquit ourselves with honor in the public square, and that we should take pride in our Americanism. Like those warriors, we must defend those things we hold dear—not with bayonets and bullets, but with words, wit, conviction, and prayer.

“Why do men fight?” Walsh asks. “What or whom is worth dying for?”

His response: “The answer, as we shall see in these pages, is surprisingly simple: they fight for themselves, for their brothers-in-arms, and therefore for their women and children and for their country, which is the expression of the family.”

The Jews who fell in A.D. 74 at Masada fighting the Romans and 19 centuries later in Warsaw fighting the Germans died defending their families, friends, and fellow combatants. The outnumbered troops at Rorke’s Drift, the Marines at the Chosin Reservoir, the Hungarians wiped out by a Turkish army at Szigetvar: all those who perished in these battles died fighting for their fellow combatants as well as for themselves.

In the political battles ahead of us, we should recognize as our comrades anyone who champions the ancient verities: liberty, truth, goodness, beauty, and tradition. Whether we are black, white, or brown, rich or poor, we cannot allow anything to divide those of us who believe in the American Dream. We are brothers and sisters bound together in the spirit by our belief in “Life, Liberty, and the pursuit of Happiness.”

Like so many of those who gave their lives for a cause, let’s gather together for love of our country and stand shoulder to shoulder for truth and justice.