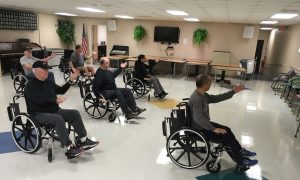 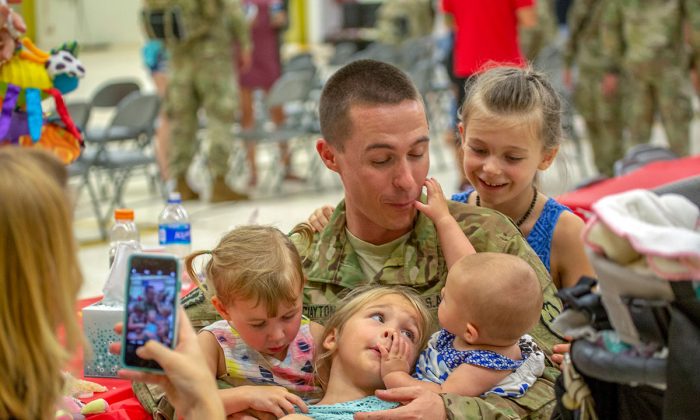 A soldier with the 25th Aviation Regiment embraces his family at a ceremony honoring the troops prior to their deployment at Wheeler Army Airfield, Hawaii, on June 5, 2018. Researchers hope neurofeedback training can help soldiers better deal with the stress of warfare. (U.S. Army photo by Sgt. Ian Morales)
Treatments and Techniques

Military personnel trained to change their own brain responses with a neurofeedback program may be able to reduce their risk of experiencing post-traumatic stress disorder, researchers say.

Neurofeedback is a form of biofeedback that can let a person see their own brain activity through a real-time display, giving them the opportunity to regulate brain function.

“If something can change in the brain to help soldiers before they go on duty, they may develop fewer symptoms of stress later,” said senior study author Talma Hendler of the Sagol Brain Institute and Wohl Institute for Advanced Imaging at Tel-Aviv Sourasky Medical Center in Tel-Aviv, Israel.

“Our brain has great capabilities of modulation, and we should strive to be more acquainted with our brain activity and those capabilities,” she told Reuters Health in a phone interview.

Typically, researchers use functional magnetic resonance imaging (fMRI) for neurofeedback training studies, especially for stress management because the deep limbic areas of the brain like the amygdala handle stress processing, Hendler’s team writes in Nature Behaviour. However, fMRI is expensive and inaccessible for many patients, so Hendler’s team developed a technique using electroencephalography (EEG) to find a signature of amygdala activity that they call the “amygdala electrical fingerprint.”

The current study tested the effectiveness of neurofeedback sessions using this EEG fingerprint in changing soldiers’ ability to control their amygdala activity.

A month after the training, participants were examined with fMRI.

The researchers found that soldiers who underwent the amygdala-focused neurofeedback training showed quicker emotional responses compared to before the training, and had lower scores for so-called alexithymia, which is related to lack of emotional awareness, so their emotion regulation had improved. They also demonstrated reduced activity in the amygdala and a related area, indicating the EEG-based neurofeedback technique had successfully targeted the desired brain region.

Soldiers in the groups that didn’t receive the amygdala-focused treatment either showed no change in alexithymia compared to before, or their scores increased, which could lead to a difficulty in identifying and expressing feelings and is often high in those who experience post-traumatic stress disorder.

“We didn’t expect to find this part,” Hendler said. “This was significant, especially if we can help people learn how to change this significant aspect of behavior.”

“It’s a self-driven treatment that gives patients agency with regard to what happens to them,” Hendler added. “They can have control, which is a big issue in psychological treatment, especially regarding medications.”

One limitation is that the study followed the soldiers for a short period of time, so it’s not clear yet how long the reduced alexithymia lasts, she noted. In addition, the study was focused on a group of similar young men with similar health and training in Israel, so future research must expand to different lifestyles, ages and cultures.

“The great part about these studies is that you don’t have to convince people to come back for treatment, and they don’t drop out, as you see with medications,” said Kymberly Young of the University of Pittsburgh School of Medicine, who wrote an accompanying commentary. “Participants think it’s cool and want to tell their friends about it.”

Because neurofeedback training involves technology, seems innovative and puts the control in the patients’ hands, she added, it could catch on easily as an effective way to treat mental health concerns, especially in younger generations.

“Exciting things are coming,” Young said in a phone interview. “The world of personalized mental health interventions is coming, and it’s not going to be only for those with money.”