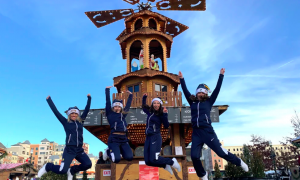 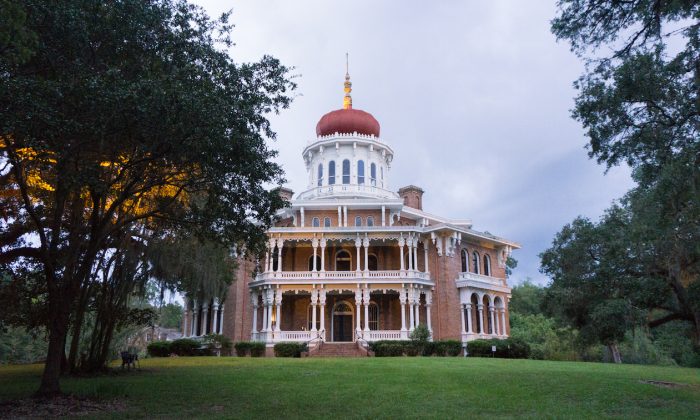 In the river town's sumptuous historic homes, the past mingles with the present
By Crystal Shi

On one night in the Southern river town, I find myself the esteemed guest of a 19th-century dinner party during the height of Southern antebellum opulence. In the lavish banquet room at Choctaw Hall, I feast on pork tenderloin and sweet potato mash surrounded by crystal chandeliers and a collection of 7,000 pieces of Jacob Petit porcelain.

Other experiences are more sobering: Walking through the former slave quarters of a plantation home; or standing at the site of the now destroyed Forks of the Road Market, once the second largest slave market in the South.

A visit to Natchez is a trip back in time. Once the playground of antebellum millionaires, it was spared the destruction suffered by many other Southern towns during the Civil War, and draws travelers with an unmatched repertoire of historic buildings: over 1,000 structures or districts are listed on the National Register of Historic Places, including 13 National Historic Landmarks and more than 600 examples of antebellum architecture—the most in one city in the country. They remain remarkably well-preserved.

Many of the larger sites are owned by the city or local organizations and are open to visitors year-round for tours.

During the Fall and Spring Pilgrimage seasons, a tradition since 1932, the privately owned historic homes—some of them passed down in the same family for generations—are open for tours, led by locals donning swishing hoop skirts and other elaborate period costumes. Special programs from historical reenactments to musical and theater performances bring Natchez, past and present, alive.

Born on the high bluffs above the Mississippi River in 1716, Natchez is one of the country’s oldest continuous settlements—two years ahead of New Orleans, its little sister three hours downriver. (Natchez’s similarly friendly, river-town vibes, but in a smaller, more intimate setting, have earned it nicknames like “the Little Easy” and “New Orleans Lite.”)

The Mississippi weaves a common thread through 300 years of patchwork history, attracting the successive people and cultures that shaped the town’s rich heritage and lasting character: first the Natchez Indians, the French, the British, and the Spanish, in turn.

Fast forward to the cotton boom of the 1800s: by then Natchez had become an economic hub and millionaires’ retreat, fueled by both river business and the work of slaves. At the height of the boom, Natchez was home to the most millionaires per capita of any city in the United States.

The city’s historic Under-the-Hill district, located beneath the bluffs on the riverfront, was a bustling port, where wealthy plantation owners loaded their cotton onto steamboats to be sold—and riverboat captains and pirates alike frequented the streets and rowdy, still-standing saloons.

The working plantations themselves were across the river, in Louisiana. Natchez, meanwhile, was where the planters built their opulent townhomes, where they lived and entertained and flaunted their wealth in grandiose displays of one-upmanship. As Sally Durkin, a longtime local guide with Open Air Tours, puts it, “Natchez was nothing but a big party town.”

The majority of these wealthy planters hailed from the North. So when the Civil War began, Natchez, a town of Union sympathizers, didn’t secede; instead, “we opened our arms” to the Union army, Durkin says, and no battles were fought. The town—and its architectural treasure trove—was saved.

Architecturally, Natchez is a feast for the eyes. Stunning historic buildings, from stately Greek Revival mansions to towering brick churches, wait around every corner, some tucked into unassuming residential districts, others anchoring sprawling grounds dotted with live oaks draped in Spanish moss.

“They represent our greatest artistic output,” says Mimi Miller, executive director emeritus of the Historic Natchez Foundation. “The complexity of them, the richness and detail … Very rarely have we built anything that was as good as what was there before.”

But greater riches still are found within their walls, in the stories of the people who lived there.

Perhaps the town’s most famous building is the unfinished Longwood, which tells the tragic story of the wealthy planter Haller Nutt and his family. The 30,000-square-foot mansion, designed by famed architect Samuel Sloan, is largest octagonal home in the country, and what would have been, as Nutt envisioned, one of the grandest symbols of the Old South—had it not been for the start of the Civil War.

Construction of Nutt’s dream home came to an abrupt stop when workers abandoned ship, and three years later, Nutt died of pneumonia—or, as legend would have it, a broken heart—leaving only the first floor completed, and nine rooms finished out of a planned 32.

Though the façade is striking and the finished rooms are beautiful, in the barren upper floors, a spirit of melancholy still hangs in the air. And as the workers who maintain and operate tours of the property will assure you, the spirits of the Nutt family do, too. It’s fitting that my introduction to the home was via a ghost tour—complete with a visit to the property’s cemetery.

Meanwhile, Dunleith, the antebellum home turned historic inn where I stay over the course of my visit, is the start of the story of John Roy Lynch, whom Miller calls one of her “heroes of Natchez history,” for “the heights to which he rose.”

Born into slavery on a cotton plantation, Lynch was brought to Natchez and became an enslaved house servant at Dunleith. At the end of the Civil War, he became the second African American to hold political office in the state of Mississippi; he later was elected as the first African-American Speaker of the Mississippi House of Representatives and became the first African American to speak at a national political convention.

His story is but a fraction of the town’s rich African-American heritage, which spans the stories of both slaves and over 300 documented free, business-owning families of color; of some of the country’s first black elected officials and, later, leaders of the Civil Rights Movement.

Keepers of the Past

Durkin, for instance, my Open Air Tours guide, is a sixth-generation Natchez native. As we zip around in her golf cart, she rattles off more history than I can take in—stories of politics and romance and the inner lives of the town’s motley characters. Passersby pull up behind us to shout Durkin’s praises as the best tour guide in town; she shrugs and credits her knowledge of Natchez to simply growing up there.

At the historic Sunnyside Bed & Breakfast, meanwhile, owner Colleen Wilkins is a “Natchoosian”—she chose to move here, in her case from Nebraska. She bought the antebellum property a few years ago, and as the sole resident of the 6,000-square-foot house, part of a larger 10-acre plot of land, keeping up with renovation and maintenance has been tough, she admits. But as the next in a line of individual female owners before her, “I feel like I was chosen to take care of it,” she says with a smile. “I feel blessed.”

It’s the work and dedication of Durkin, Wilkins, Miller, and the Historic Natchez Foundation, and of countless other proud and passionate residents that have kept Natchez the way it is today. They continue the important work of the keepers of history before them.

Asked where that dedication comes from, Miller muses that the town’s uniqueness gives its residents “a little more pride in where they’re from. I think when you have an unusual sense of identity, it gives you a sense of pride and place,” she says. “It builds a sense of community.”

Recent years have seen a slew of Natchez natives, after moving away, coming back to settle in their hometown. They join many others from New Orleans, as well as Texas and California, Miller says, wooed by Natchez’s small-town charm and livability.

For natives, the preservation of its character is a powerful draw. “The town pulls them back because the church they grew up in is still here. The stores they shopped in are still here. You can go home again,” Miller says.

For visitors, the town’s openness and warm hospitality make it feel a bit like you’re coming home, too.

At Sunnyside, cozied up on a couch in the bookshelf-lined study, with a cup of coffee and a slice of my generous host’s famous strawberry cake, I feel so at home that I imagine it could be my own.

I think the same as I greedily breathe in the scent of sweet osmanthus that perfumes the town’s every street, or gorge myself on fluffy pancakes and biscuits and gravy at the family owned and operated Natchez Coffee Company on a Saturday morning. Live guitar music fills the space, giggling children run amok, and waiters and the owner herself patrol the tables, refilling coffee and making sure all are well fed and happy. Natchez welcomes with open arms.

That’s the thing about a river town, Miller says: “It always looks forward to whoever arrives.”

Fuel up for a day of walking at Steampunk Coffee Roasters, named for the handsome, golden espresso machine behind the counter, with specialty coffee, giant muffins, and delightfully springy bites of pao de queijo (Brazilian cheese rolls). The building is a reclaimed brick cabin dating back to circa 1868.

This year’s Spring Pilgrimage season runs from March 16 to April 16. Along with daily tours of over 20 historic homes ($15 per person for private homes, $20 per person for museum houses), highlights include a Southern cooking class; a black-tie ball in an antebellum mansion; and performances of the Historic Natchez Tableaux, put on by a completely local and volunteer cast. Tickets available at NatchezPilgrimage.com.

Explore Natchez’s African-American heritage, an inextricable part of its history, with Miss Lou Heritage Group & Tours. Their most popular itinerary, the Natchez Heritage Tour, makes stops at the Forks of the Road Slave Market, the Natchez Museum of African American History and Culture, and the Watkins Street Cemetery, the mass burial site for the Rhythm Club Fire of 1940. Tickets available at MissLouHeritageGroupAndTours.com.

For a memorable intersection of Natchez’s defining strengths—history and hospitality—stay in one of the town’s 40-plus antebellum and Victorian bed and breakfasts and historic inns. Many date back to the 1800s, but now welcome guests with modern amenities in historic surrounds.

The writer was a guest of Visit Natchez.