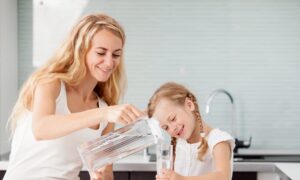 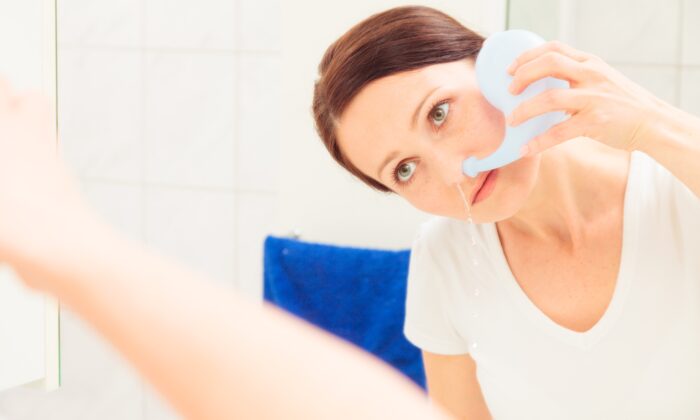 Nasal irrigation can be done safely and inexpensively at home and may help prevent severe COVID-19 by stopping coronavirus infections from reaching our lower respiratory tract. (nullplus/Shutterstock)
Mind & Body

Because of the way viruses invade the body, direct interventions can help combat infection
By Joseph Mercola

A recent preprint study by researchers at Augusta University and Edinburgh Napier University demonstrates that people who used normal saline nasal irrigation were 19 times less likely to require hospitalization for treatment of COVID-19 than the national rate for hospitalizations.

A preprint means that the study hasn’t been peer-reviewed yet. Nevertheless, the results are promising, especially since people can perform nasal irrigation safely in their homes.

According to a 2009 article in the American Family Physician, nasal irrigation has been an adjunctive therapy for upper respiratory conditions and is currently prescribed after nasal and sinus surgeries.

Nasal irrigation with a neti pot instills normal saline into your nasal passages with a small device that resembles a teapot. After inserting the end of the pot into one side of your nose, the solution moves around the sinuses and comes out through the other nostril.

The treatment can be effective for different conditions. For example, flushing out pollen in the nose and sinus cavities with a neti pot helps to manage the symptoms of mild to moderate allergic rhinitis.

While using a neti pot is probably the most recognized over-the-counter method of deep nasal irrigation, one study evaluated other irrigation techniques to discover which would more effectively reach the maxillary sinus and frontal recess after endoscopic sinus surgery. They analyzed the results of a metered nasal spray, nebulization, and nasal douching “while kneeling with the head on the floor.”

Nasal douching is a procedure in which you “sniff” saline into your nostrils; researchers found that it was more effective than a metered nasal spray or nebulized normal saline to reach the sinus cavities.

If you want to try nasal irrigation with a neti pot and you’re thinking of making your own saline solution, it’s important to remember to use only distilled, sterile, or cooled-down boiled water. Tap water can contain bacteria and protozoa that may be safe in the gastrointestinal tract, but not in your nasal passages, where a free-living microscopic ameba called Naegleria fowleri can trigger a devastating brain infection that’s usually fatal.

The Augusta study compared the clinical outcomes in patients with COVID-19 using normal nasal saline irrigation. The researchers engaged patients who were aged 55 or older and tested positive with a PCR test in a community testing site.

They began with a group of 79 patients who were randomized into two groups. The data was then compared against outcomes from the Centers for Disease Control and Prevention’s national database. That’s how they found that their participants were less likely to be hospitalized.

In that study, the participants used one of two pressure-based nasal irrigation systems: the NAVAGE or the NeilMed Sinus Rinse.

The participants were then randomly selected to use either one-half teaspoon of sodium bicarbonate (alkalinization) with the standard saline rinse twice a day for 14 days, or 2.5 milliliters (roughly a half-teaspoon) of povidone-iodine 10 percent solution (antimicrobial) for the same period. The researchers then followed up with each group 14 days after their final intervention.

The primary outcome tracked was hospitalization for COVID-19 within the first 28 days after the intervention began. Secondarily, they tracked symptom resolution, adherence to the intervention, and any side effects that the intervention may have had on the participant. At the end of 28 weeks, 62 patients had completed their research diaries and averaged 1.79 irrigations each day.

After analyzing the results, the researchers found that there were no statistical differences in outcomes when the participants used the povidone-iodine antimicrobial wash or alkalized the nasal cavity with sodium bicarbonate. None of the patients assigned to the povidone-iodine wash and only one assigned to the alkalized group experienced a COVID-19-related hospitalization.

However, resolutions of symptoms in those using the povidone-iodine were more likely. The researchers concluded that isotonic saline nasal irrigation had a positive effect on reducing hospitalization and that “further research is required to determine if adding povidone-iodine to irrigation reduces morbidity and mortality of SARS-CoV-2 infection.”

Further study may also be necessary to determine if alkalizing the nasal cavity has an effect on killing the virus and preventing hospitalization, as the body’s natural pH is slightly alkaline and most pathogens prefer an acidic environment. Clearing the oral cavity of a COVID-19 patient is also part of the outpatient IMASK protocol from the Front Line COVID-19 Critical Care Alliance.

Nasal irrigation isn’t the only treatment that directly treats the infection where it resides in the body.

In early 2020, a joint research team from Italy and the UK published a paper on infection control and hospital epidemiology. In April, they recognized that “the virus resides in the mucous membranes and is transmitted through saliva and respiratory droplets” to facilitate viral spread.

The paper recounts how in February 2020, the Italian government recommended sanitizing the environment with 0.5 percent hydrogen peroxide, as it was already in use for both disinfectant purposes and to treat oral gingivitis. They cited a 2016 study with the SARS coronavirus, which showed the virus stays in mucous membranes for up to two days before moving to the lower respiratory tract.

The team identified that delay as a window of opportunity to prevent the onset of symptoms. Because hydrogen peroxide efficiently inactivates coronavirus on inanimate surfaces and it has been tested in, and is in use, in human health, they proposed that hydrogen peroxide could reduce the chances of hospitalization and the severity of the illness when it was used in the oral and nasal mucosa.

They postulated that gargling three times per day and using a nasal wash and nebulizer twice per day could be safe and effective. In March 2020, a retired professor from the University of Ghana Medical School wrote in a letter to the editor to the BMJ that “there is evidence that even 0.5 percent hydrogen peroxide could inactivate the SARS-CoV-2 on surfaces.”

And since hydrogen peroxide has been in use in dental practice for nearly 100 years and in view of its safety, he proposed that the World Health Organization add hydrogen peroxide mouthwash and gargling to their preventive protocols.

By May 2020, word about hydrogen peroxide reached the ears of the Federal Trade Commission, which then began issuing warning letters to those who dared to suggest that hydrogen peroxide was an at-home treatment that may be effective against SARS-CoV-2.

In an open letter, physician and attorney Thomas Levy attributed the original concept of nebulizing hydrogen peroxide to Dr. Charles Farr, who “championed” it in 1990. In the letter, he discussed how the extra oxygen atom in hydrogen peroxide is deadly for viruses and how under normal circumstances, your immune cells produce their own hydrogen peroxide.

Yet, when your immune system is overwhelmed with viral replication, it may not be able to produce enough hydrogen peroxide. The original therapy used intravenous administration, which made the process unavailable for most people.

Dr. Frank Shallenberger, known for his research in mitochondrial function and oxygen utilization, went on to propose and use nebulized hydrogen peroxide, finding that it had an additional advantage, as the intervention went directly to the area of the body that was most affected by a virus.

Although Levy recommended using 3 percent hydrogen peroxide off the shelf and undiluted, I prefer food-grade hydrogen peroxide that doesn’t have the additives and stabilizers that you find in the products sold at big box stores.

Disclaimer: This article is based upon the opinions of Dr. Mercola, unless otherwise noted. It isn’t intended to replace a one-on-one relationship with a qualified health care professional and isn’t intended as medical advice. It’s intended as a sharing of knowledge and information from the research and experience of Dr. Mercola and his community. Dr. Mercola encourages you to make your own health care decisions based upon your research and in partnership with a qualified health care professional.

If you’re pregnant, nursing, taking medication, or have a medical condition, consult your health care professional before using products based on this content.