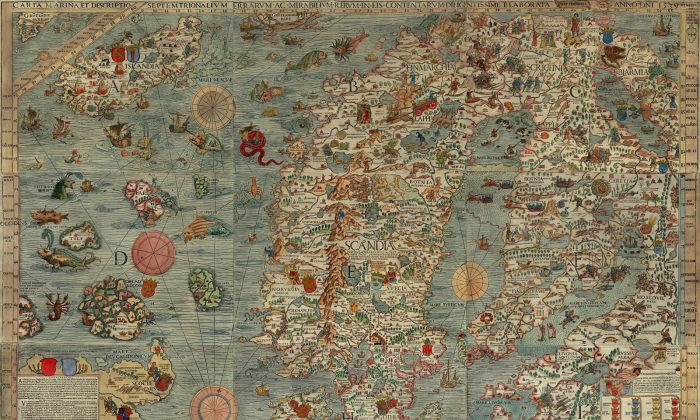 Myths have always provided us a way to map the unknown. A detail from the Lenox Globe, the second or third oldest terrestrial globe, believed to be created in 1510. (Public Domain)
World Culture

Introduction to a series
By James Sale
biggersmaller
Print

Slowly at first, but surely at last, the modern world is losing its capacity to understand myth. It was like an avalanche: a small trickle at first in the 17th century, then a snowball gathering pace in the Enlightenment, till finally a soul-destroying, wall-like wave of white, frozen death overwhelmed us in the 20th and on to the 21st centuries. Even the dictionaries now testify to this sad reality—words frozen on a page, just like our failed understanding of what myth is.

Do you know what myth is? And why it’s important to understand? How does understanding it help us now?

To the Shorter Oxford English Dictionary, myth is “a purely fictitious narrative”; and for another dictionary, it is “a commonly held belief that is untrue or without foundation.” These kinds of definitions are replicated in all dictionaries. The “fact” is that myth now is commonly understood to mean a story that is untrue, but which we like anyway because we like stories! Indeed, the origin of the word “myth” is from a Greek word meaning fable or narrative.

Initially, there are two important points to grasp here: One is that being a myth, therefore, is not important because it is untrue, nonfactual, and imaginary; and two, that real knowledge is in another domain, and we call that domain “science.”

If these points seem academic, then we need to think again, for the consequences of these beliefs, even if subconscious, are quite profound. We see the consequences in our educational systems as math and science are increasingly predicated as more important than the humanities and arts, and so the funding increasingly goes one way and not the other. We see them in the respect accorded to science and technologies, whereas the arts—excepting the relatively few Hollywood stars and multi-platinum artists—are the poor relations; and in the UK and to a lesser extent in the United States, we use the term “poet” as almost a term of contempt. The mainstream takes barely any notice of poets at all!

But reality is very different. For, as professor Brian Cox once sagely observed, “Narrative may be regarded as a primary act of mind.” We can only understand reality through story. Even science has to revert to narrative (or is that fable, or myth?) to explain itself.

Take its most famous narrative: The Big Bang! What is that? But a story that the human mind gets. Of course, scientists like to “imagine” that because scientists say so, it must be true or must be a true story, although even to a casual observer, the story—for example, the time frame—seems to change as it progresses: In the 1990s, the theory was that the universe was 15 billion years old; now we are “certain” that it is 13.7 billion years old. Let’s be clear: 1.3 billion years is not an inconsiderable difference! But that, though, is explained by the word “progress,” to which we shall return shortly.

Myth is not fiction in the sense that it is untrue, but a story in which profound truth is communicated or embodied. In fact, the most important truths of all are conveyed via myths. What are these truths that are so profound, and why are we not aware of them?

First, we are not aware because we have lost the capacity to see myths, and the truths themselves are invisible. That’s right: They are invisible. All of the most important things in the world are invisible when we actually think about it. Thinking itself, incidentally, is also invisible. We can’t see thinking, except perhaps in our mind’s eye, which is where the important, the deep truths lie. To give examples: What is more important than love, or goodness, or ideas, or our values. None of these things are visible, yet we can easily die for them.

Of utmost importance and beyond the invisibilities already mentioned are, in the Western tradition, God—of whom it is said, “eternal, immortal, invisible, and only wise”—and in the Eastern one, the Tao. The Tao in the first line of the “Tao Te Ching” goes beyond even invisibility, for it says, “The Tao that can be spoken of is not the eternal Tao.” Invisible? Inaudible and mute too.

Thus myths make the invisible visible, so that we as humans can understand more readily what reality—the Tao, the nature of God—is like, and so modify our being and behavior accordingly in order to avoid what the Greeks called hubris. Hubris is what destroys us.

So, yes, it is important to be able to understand myth, for our own future depends on it. The ancient Egyptian “Book of the Dead” says, “All the world which lies below has been set in order and filled in contents by the things which are placed above; for the things below have not the power to set in order the world above.” A clear reminder of mortality and of human nature and its limitations.

But what is made clear in the story is that the choice of knowledge is death. The word “science” itself etymologically means knowledge, and who could actually deny that the whole planet now is precariously lurching toward its own self-generated Armageddon derived from science? Knowledge of this kind has polluted the planet, invented biological and atomic weaponry, and much more besides. As the United States and North Korea and Russia, not to mention China, saber-rattle in their different ways (and this is not to allocate blame), don’t we feel the danger the whole world is in?

The irony is that science has generated its own myths (although scientists can’t accept their views as myths) to perpetuate its own supremacy, and so avoid genuine scrutiny and accountability. The most pernicious of these is the myth of progress.

The ancients believed we had a Golden Age in the past, but the moderns discard all that—superstition!—for the Golden Age is coming. Ever coming, but never arriving, of course. And alongside the progress of science, we have progressive politics too, which has come to mean: Let’s allow general anarchy and do whatever.

We also have a fatuous, progressive history of the world that presupposes things are getting better despite the evidence of two world wars and horrors on a scale never dreamed of before. Even Alexander the Great or Genghis Khan would have been impressed by the savagery and destruction of the second war wrought by men who all shared the concept of “progress,” “wars to end all wars,” and “never again.”

The consequences of failing to heed or understand myth, then, are profound, and I would like to explore some myths and draw out for you some implications for our understanding of the modern world and what this means for us.

James Sale is an English businessman, creator of Motivational Maps, which operates in 14 countries. Sale has authored over 40 books from major international publishers, including Macmillan, Pearson, and Routledge on management, education, and poetry. As a poet, he won First Prize in The Society of Classical Poets’ 2017 competition.