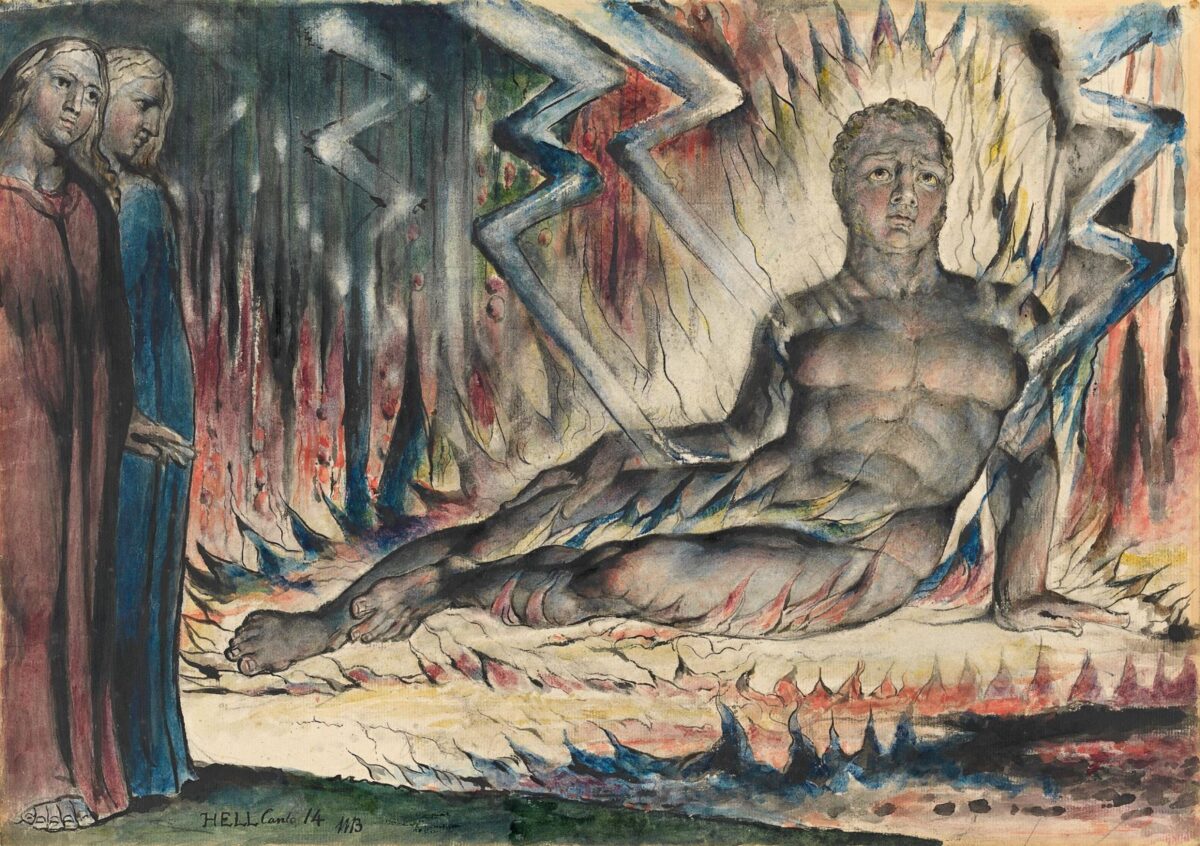 Myths for Our Times, Part 2: Capaneus and the Age of Hubris

What does the story of the great ancient warrior Capaneus have to do with technology today? Or with the myth of Frankenstein, for that matter?

In our first article in this two-part series, we looked at how the myth of Frankenstein (and its Greek-related story of Prometheus) was a warning to us about the dangers of the technological age we live in. Two aspects of the danger were, on the one hand, the scale of the monstrosities that humans might “create” (for example, atomic weaponry), and on the other, the fact that technology might get out of hand and become not only uncontrollable but also the master who dictates to and controls human beings (such as Artificial Intelligence). But I indicated at the end of the article that another Greek myth, much less well-known, speaks potently to our condition today.

This myth is the relatively brief narrative of Capaneus, one of the Seven Against Thebes.

Capaneus? What did he do? He was one of the seven great warriors who went to sack Thebes in support of Polynices against his brother, Eteocles. The warriors aimed to restore the kingship to Polynices, as recorded by the Roman poet Statius in his epic, “The Thebaid.” All but one of the heroes was killed in the attempt to take Thebes, and the attempt itself, on this occasion, failed.

Capaneus was noted for his giant size and strength, and also for his astonishing arrogance. This character flaw was so striking that Dante, centuries after the end of the Greek and Roman civilizations, included Capaneus as one of the damned in Canto 14 of his “Inferno.”

Capaneus was included as the representative of a certain sin: blasphemy. This is surprising since he was a pagan! We might think that Dante could have found someone within Christendom to exemplify this transgression, but no: Capaneus is the model.

What, then, did Capaneus do? In book 10 of “Thebaid,” we see that as he stormed the Theban wall and was about to go over the top and sack the city, he cried out, “Are there no gods among you, who stand for panic-stricken Thebes?”

“Where are the sluggard sons of this accursed land, Bacchus and Alcides? Any of lesser name I am ashamed to challenge. Rather come thou—what worthier antagonist? For lo! Semele’s ashes and her tomb are in my power!—come thou, and strive with all thy flames against me, thou, Jupiter [Zeus]! Or art thou braver at frightening timid maidens with thy thunder, and razing the towers of thy father-in-law Cadmus?”

Or put more bluntly, Capaneus taunted: I challenge you, Zeus, for not even you can stop me now!

Zeus’s response to this challenge is direct and immediate. There is a brilliant ending to book 10 with these words:

“Even as he spoke, the thunderbolt struck him, hurled with the whole might of Jove: his crest first vanished into the clouds, the blackened shield-boss dripped, and all the hero’s limbs are now illumined. The armies both give way, in terror where he may fall, what squadrons he may strike with his burning body. He feels the flame hissing within him and his helmet and hair afire, and trying to push away the galling cuirass with his hand, touches the scorched steel beneath his breast. He stands nevertheless, and turning towards heaven pants out his life and leans his smoking breast on the hated battlements, lest he should fall; but his earthly frame deserts the hero, and his spirit is released; yet had his limbs been consumed a whit more slowly, he might have expected a second thunderbolt.”

I quote the whole passage so that we can feel the total devastation from the god, Zeus: “helmet and hair afire,” the “scorched steel,” and even the sense of its decisive speed, for if it had taken a moment longer, Zeus would have sent a second bolt. Notice, too, the effect it has on all those around: both armies give way “in terror.”

The Sin of Pride

What has Capaneus and his death to do with us today? Isn’t Capaneus just some egotistical, misguided individual who got his just desserts? Hardly, which is why Dante included him as a representative type in his “Inferno.” While we might call Capaneus’s sin blasphemy as Dante does, there is also another root sin here with which we are all too familiar: hubris.

Hubris is the ultimate sin for the ancient Greeks; it might be translated into Christian terminology as pride—the primal sin that caused Satan to fall from heaven.

In the dictionary, hubris is said to be “excessive pride.” And in Greek tragedy, it is defined as excessive pride toward or defiance of the gods, leading to nemesis. There are many, many examples of this pride toward the gods in Greek mythology and history. To name just three famous ones: Marsyas boasted he could out-perform the god of music, Apollo; Arachne boasted she could weave better than the goddess Athena; and in actual Greek history, we find the Persian king Xerxes in Herodotus’s history of the Persian Wars (fifth century B.C.), who tried to punish the sea by whipping it for destroying his bridge over the Hellespont (the ancient name of the narrow passage between the Aegean Sea and the Sea of Marmara, now known as Dardanelles).

The point is that hubris leads to nemesis, which in everyday terms can be described as one’s comeuppance. This fate is not surprising since the individual has resisted or gone against the nature of reality. He has defied the cosmos and its internal laws—what holds it together, in fact—and for this there are consequences. As Russian-American novelist Ayn Rand so beautifully put it, “We can ignore reality, but we cannot ignore the consequences of ignoring reality.”

Today we live in a world brimming with hubris. We live in a world with the hubris of technology and its persistent vaunting to change the nature of human reality, to enable us to live for hundreds of years, even to prevent dying. As John Gray in his book “Heresies” observed, “At that point [in the future], equipped with the new powers conferred by biotechnology, we will be what Lenin could only dream of becoming—engineers of souls.”

But hubris extends further. There is also the everyday hubris of sports teams, media personalities, politicians, and especially world leaders. One could easily list 50 such people from the European Union, North Korea, China, even the United States, but let’s just consider one: President Putin from Russia.

Russian TV (clearly with his approval) casually entertained the idea of letting off nuclear weapons in the Atlantic in order to create a tsunami that would literally drown the United Kingdom—not to mention the effect on other European countries. (And let’s not forget the aquatic environment.) This proposal is simply mad in the sense that it undoes all life, and potentially Russia’s as well. And that is why it is a Capaneus-the-Proud moment: It stands against the cosmos, against law, against order, against creation, in order to indulge self-importance.

It is interesting to note that Capaneus’s sin does not die with him. In Canto 14 when Dante meets Capaneus, we learn that the “mighty one seems unbothered by burning”! He affects to be unaffected by the judgment of Zeus: “What I was once, alive, I still am, dead.” Nothing changes him; nothing will change. There is no discussion, debate, or argument: Every Capaneus is fixed, not just by the hand of death but also after death.

One last point to make about this myth, though, is the irony. When we think about it, it is Frankenstein in reverse. In the Frankenstein myth, the inventor uses technology to piece together the monster with some elemental life principle, which isn’t clarified, but which has entered the popular imagination as electricity or lightning. But Capaneus, standing in a full thunderstorm at the top of a wall in metallic armor with a metal sword upraised, is brought down by lightning, electricity—the touch of the god.

Then, if we harness these enormous powers and think that we can control the outcomes—and thereby defy the cosmos, the Tao, the gods—in these hubristic ways, we can only lead ourselves to disaster or what is called nemesis. Sadly, the myths inform us that many also have to perish in the wake of this kind of hubris.

In Part 1, of this two-part series, “Myths for Our Times,” we discussed the myth of Frankenstein and technology today.