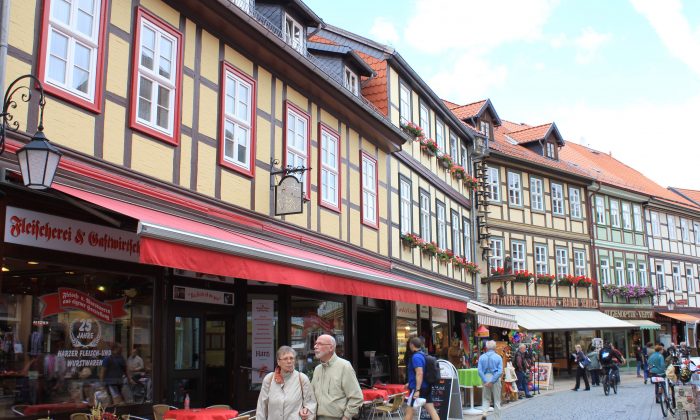 For centuries, the Harz has been a mythical and much-feared mountain range in central Germany. Residents in the surrounding villages and towns believed that demons and ghosts lived there on the highest mountaintops and in the deepest mines.

The most famous legend is arguably the meeting of the witches on top of the Brocken Mountain, the range’s highest peak, an event vividly described in the first part of Goethe’s “Faust.”

Everywhere in the Harz region, Walpurgis Night, or May Day Eve, is celebrated on April 30 with fireworks and concerts staged on top of the Brocken, signifying the arrival of the warmer season.

But for many Germans there is an even more important annual event to make the trip up the Brocken Mountain: the anniversary of the reunification. During the Cold War, the inner German border ran right through the Harz mountain range, and from 1961 electric fences, automatic firearms, and mines guarded the Iron Curtain and separated a people for nearly 30 years.

There was a joke that the Brocken was the highest mountain in the world—because no one could reach the top. The summit was right at the war’s frontline and fortified with 3.60 metre-high walls. It hosted some top-secret spy equipment and antennae directed toward the West.

On Dec. 3, 1989, nearly a month after the Berlin Wall fell, the Brocken was open to the public once more.

On Dec. 3, 1989, nearly a month after the Berlin Wall fell, the Brocken was open to the public once more. The day the fences collapsed, 100,000 people from both sides of the former border trekked to the summit. For them, the freedom to climb their iconic mountain that they could only gaze at for so long was the fulfillment of an impossible dream. Every year on Oct. 3, Germany’s National Day, many people visit the Brocken and celebrate.

By far the easiest way to reach the summit is to jump on one of the popular steam engine trains that run across the Harz Mountains on some 140 kilometres of network. The lines connect the principal towns of Wernigerode, Nordhausen, and Quedlinburg, but many visitors opt to drive to the picturesque resort town of Schierke and take a train from there to the top of the Brocken. The vintage carriages have outdoor viewing platforms, so sightseers should be prepared for smelly steam, loud whistling noise … and fantastic views!

There are many charming towns surrounding the Harz Mountain range, but a visitors’ favourite is Wernigerode on the northeastern flank. In Germany, the town is famous for its unusual city hall with its sharply pointed lead steeples and bright orange timber façade from 1498. Some of the buildings surrounding town hall and market square are elaborately adorned with wood-carvings.

But not just the main passage ways are quaint. The entire inner town, surrounded by relics of the old city wall, features cobble-stoned streets and timbered buildings. The oldest house in Wernigerode, built in 1546, has now been turned into holiday accommodations.

“There are some very strict building regulations, but we managed to keep some of the original features, like heavy wooden doors, metal door handles, and wooden crossbeams,” said owner Marko Kümmel.

Wernigerode’s main attraction is the mountain-top castle which can be seen from far away. Originally a fortress, it was erected to secure the travel routes of the medieval German emperors when they were hunting in the Harz Mountains. It has been open to the public since 1930 and some 40 rooms give a glimpse into the lives of German nobility in times past.

The other big attraction is the view over Wernigerode and the Harz mountains from the ramparts, which are accessible without paying the entrance fee to the castle.

Thale and the Bode Valley

The River Bode travels right through the Harz Mountains, carving out the most beautiful scenery the region has to offer. The river runs through the town of Thale where, 454 metres above the valley, the vertiginous Hexentanzplatz (Witches’ Dancing Place) plateau looms.

Legend holds it was here that the local witches had their initial rendezvous on Walpurgis Night before flying off to the main celebrations on the Brocken Mountain.

The easiest way to reach the Hexentanzplatz is by cable car from Thale, on the opposite side of the Bode River. However, there are also several pathways leading up to the Harzer Bergtheater, a natural amphitheater which was founded in 1903, where plays are regularly staged during the summer months.

Directly opposite the Hexentanzplatz, across the river, is the Rosstrappe, a 403-metre granite crag. From the plateau-like summit, visitors can descend to a group of rocks poised directly above the Bode River below, where a natural indentation closely resembling that of a horse’s hoof can be seen.

According to legend, a giant by the name of Bodo once chased the king’s beautiful daughter, Brunhilde, through the mountains. Brunhilde escaped on a white stallion but was suddenly challenged by a deep ravine. Her horse leapt in one bound to the rocks on the other side, but her pursuer plunged into the chasm. The impression of her horse’s hoof can still be seen there today.


Wibke Carter is a world traveller who hails from Germany, has lived in New Zealand and New York, and presently enjoys life in London.

Wibke Carter
Follow
Wibke Carter is a travel writer who hails from Germany. She has lived in New Zealand and New York, and presently enjoys life in London. Her website is WibkeCarter.com.