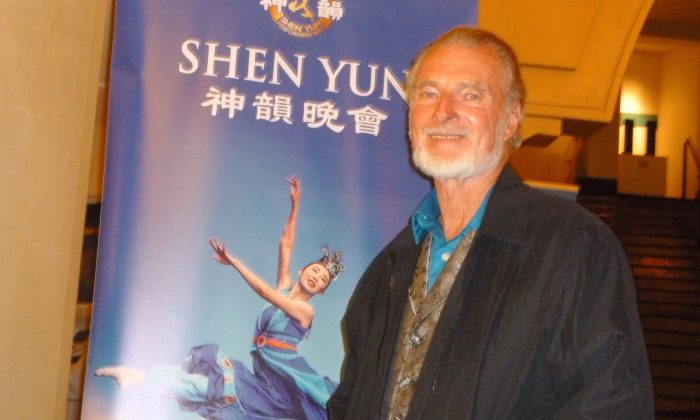 ESCONDIDO, Calif.—David Lewis, a musician and former professional photographer, had a deeply spiritual experience watching Shen Yun Performing Arts at the California Center for the Arts on Tuesday, Feb. 24.

“I think it’s absolutely beautiful,” he said. “I saw all these different variations of beautiful worlds—Heaven.”

Established in 2006, New-York-based Shen Yun seeks to revive the 5000-year, rich traditions of The Divine Land, which is what China was once called, according to the company website.

“Throughout history almost every culture looked toward the divine for inspiration. Art was meant to uplift, bringing joy to both the people who created and experienced it. It is this principle that drives Shen Yun performers and their art,” states the website.

Mr. Lewis, who has been practicing meditation for almost 30 years, said from the very beginning of Shen Yun, he felt that the dancers were telling a story of what life is really about, how life on this earth is something of an illusion, and we have the choice of following evil or good.

“Words can’t really explain,” he said. “It just makes me feel very strong inside, and I’m on the right path.”

Shen Yun uses the art form of classical Chinese dance to bring to life the legends of Chinese history, along with a variety of folk dances, accompanied by a live orchestra with both Eastern and Western sounds. Also included are dazzling handmade costumes, stunning backdrops, and inspirational instrumental and vocal soloists.

Mr. Lewis especially loved the soprano soloists and their lyrics, which he said sent a message of living a pure life.

He also enjoyed the digital, animated backdrops that extend the stage and interact with the dancers.

As a photographer, he was stunned by the colorful backgrounds.

“It was absolutely beautiful,” he said. “I don’t think I could mimic those pictures, that beauty, but I try.”

Overall, Mr. Lewis felt like Shen Yun gave him a very personal, spiritual experience with ‘The Holy One.’

Miguel Gonzales, a civil engineer, his wife Belen, a hospice worker, and their two children had a wonderful evening at Shen Yun on Tuesday.

“It’s all beautiful, all wonderful,” said Mrs. Gonzales. “I think that message, what I liked across the whole show was…”

“Especially now, in the times that we’re living in, it’s very difficult,” she said. “We need to be compassionate … I thought that was a good message.”

“Entirely non-profit, and independent of the Chinese regime, Shen Yun enjoys the artistic freedom of New York, enabling it to now bring these ancient traditions to the stage,” states the company website.

Mrs. Gonzales thought the performance demonstrated how important is it for people to peacefully coexist with each other.

“No matter what, we’re all human beings, and I think that we’re all here set on the same purpose—to love, care, respect, and respect each other no matter our differences,” she said.

“I know it’s a total cliché, but words just can’t describe it,” she said. “You have to actually be there to really appreciate it, and it’s one of those things that’s really going to stick with you for a long time. You think about the dances, the music, because it’s all a very personal connection.”

“I felt like it was a once-in-a-lifetime thing,” said Miguel, Jr. “There’s nothing like it. I’ve never seen anything like it … It was really inspiring to me.”

Mrs. Gonzales thought the soprano soloists were “magnificent” and the interactive backdrops were very creative and fascinating. She also noticed the elegance of the women dancers and their costumes.

“They were very modest in the way they dressed—very feminine, very elegant,” she said.

“This is a show that I would come back every year to see,” said Mr. Gonzales.