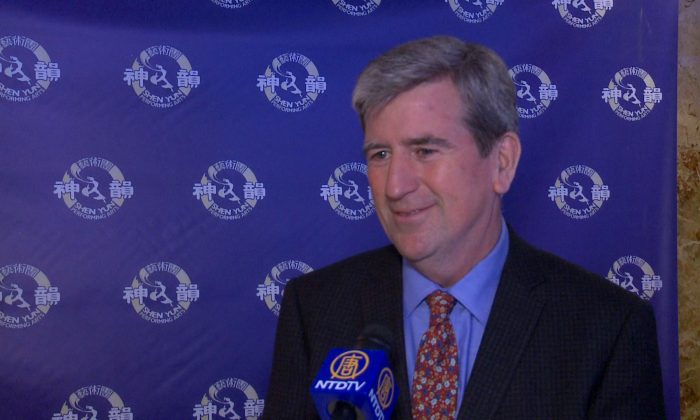 TORONTO—MPP Glen Murray saw Shen Yun Performing Arts for the fourth time on Thursday, and had a clear message for Ontarians after the performance.

“Come on down and see this” he said on opening night, Jan. 23 at Sony Centre for the Performing Arts. “It is so much fun—bring your friends, bring your family and learn something and enjoy it.”

Mr. Murray, Ontario Minister of Transportation and Minister of Infrastructure and former mayor of Winnipeg, said Shen Yun had reached the pinnacle of the performing arts.

“There’s nothing like it you will ever see on stage in Canada—it’s truly beautiful, artistic, it’s really brilliant,” he said.

“Truly one of the greatest shows that anyone can see.”

The renowned classical Chinese dance and music company will perform five shows in Toronto and four in Vancouver this week, to end its Canadian tour. Shen Yun has four touring groups that simultaneously perform around the world, on a mission to revive 5,000 years of divinely-inspired Chinese culture.

Mr. Murray, a frequent jet-setter, said he was happy to see Shen Yun promotions along his travels around the world—from San Francisco to Australia.

“One of the great things about this is these performers are working all around the world. This is something that you can experience whether you live in Australia, Canada, Britain or France,” he said.

“This is global arts and global culture, but it’s also a global movement for human rights. And that, as a Canadian, is something I’m very proud to support.”

Shen Yun aims to revive the essence of traditional Chinese culture, which has been systematically destroyed under decades of repression by the Chinese communist regime, according to the Shen Yun website.

Mr. Murray enthusiastically applauded this effort to entertain and inform.

“It’s a sophisticated and smart way, for those of us who don’t live in China, who don’t know what’s happening there, to understand some of the terrible things that are happening to the citizens of China—especially for those people who are looking for liberty and freedom,” he said.

Because Chinese immigrants make up such a large portion of the Canadian diaspora, it would be beneficial for all Canadians to see Shen Yun and gain a deeper understanding of the culture, said Mr. Murray.

“To understand thousands of years of fellow Canadians’ roots from China is fascinating—it’s beautiful, it’s wonderful,” he said.

Mr. Murray was also in awe of the dancer’s skill and agility.

“They’re so athletic. Those young men and women are jumping and leaping and it’s just very exciting to watch,” he said, adding he loved the flips and tumbling techniques in classical Chinese dance: “I was watching how amazing the movements were.”

He was moved by the operatic solo performances, saying they were among the best he’s experienced.

“The skill level of the singers is amazing,” he said.

The performance included a soprano, tenor and baritone that sing bel canto operatic style with Chinese lyrics. According to the Shen Yun website, it is one of the most difficult singing styles in the world to master.

“The performances are amazing. They’re beautiful, they’re warm, the music is great, the singing is amazing,” said Mr. Murray.

He highly recommended Shen Yun and urged Ontarians to catch one of the remaining performances.

“I think they should come and see the show. For three reasons: it’s beautiful, it’s very artistic and cultural, and it’s very important to support our brothers and sisters in China who are struggling under oppression,” he said, adding the spirit of the show aligns with Canadians’ values.

“If they lived in Canada they would have the freedom to express themselves culturally, philosophically, and their values and their freedoms. And this is a wonderfully positive way that you can have a great evening and also learn a lot about [another] part of the world.”