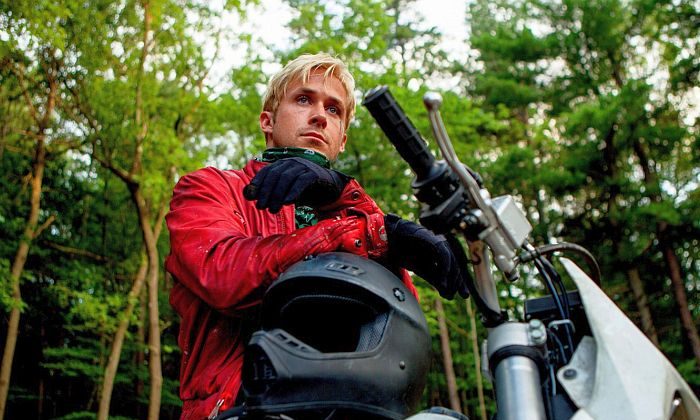 Ryan Gosling plays Luke in “The Place Beyond the Pines,” a dramatic film about a stunt man who rides motorcycles and turns into a bank robber. (Courtesy of Focus Features)
Entertainment

Movie Review:’ The Place Beyond the Pines’

The place beyond the pines. The Native American word for this phrase is “Schenectady,” a small city in upstate New York.

It might as well mean “Anytown, USA” as the setting of “The Place Beyond the Pines” is one of rural back roads, auto-body shops, farms, traveling carnivals, small-town cops, and romantic tattooed men.

In the quietly decaying tragic-Americana setting of this fine film, the story that’s told is one of far-reaching repercussions, legacy, and how the loss of the father’s virtue lands on the son.

Luke (Ryan Gosling) is a road-circus motorcycle stunt performer with a dagger tattoo near his left eye, and a chain five miles long. Upon every link, a heart does dangle.

Back in town after a year on the road, Luke looks up an old girlfriend (Eva Mendes), who in the meantime, unbeknown to him, has had his baby.

Luke’s life suddenly has real meaning. Quitting the circus life, he becomes a local mechanic. As the grim reality dawns that he’ll never provide for a family by tinkering with engines, he begins robbing banks with his unique stunt-cyclist skill set.

Drawn against his will into a corrupt cop underground reminiscent of the film “Cop Land,” and helmed here by scary detective Deluca (Ray Liotta), Cross escapes by setting his sights on politics. He carries a family photo of Luke in his wallet, subconsciously seeking redemption.

Act 3. Luke and Avery have sons. Enough said. Any more and it’s a spoiler.

Act 1 is dynamite. Act 2, less so, but still good. Act 3 is brought down by the fact that Dane DeHaan and Emory Cohen are not Ryan Gosling and Bradley Cooper.

Each act could be a movie unto itself. The film works as whole but lacks the feeling of a large time arc, the main reason being that Cooper’s character needs to visually age more.

Gosling has trodden, or rather ridden, this ground before in “Drive.” He stunt-drove cars there; he stunt-drives motorcycles here. Knowing Hollywood, he’ll most likely stunt-drive a boat next, but we’ll enjoy watching him do it. He drives a mean stunt. Gosling’s arguably the Sean Penn of his generation.

Mendes, Cooper, and Ryan are an acting powerhouse trio. Ben Mendelsohn, as Luke’s mechanic boss and bank-robbing partner, joins the ranks of the immensely talented Australian actors who play Americans more believably than Americans do.

Reflected in the tones of the Native American name Schenectady, as well as in the film’s archetypal Greek-tragedy storyline, is the well-known lesson of why America’s Native peoples made no decisions without their elders first pondering the effects that their actions would have, reverberating downward for seven generations.

“The Place Beyond the Pines,” in this case, really means “The Place Beyond Ourselves.” The film is a call to reflect, ahead of time, on how our actions will positively or adversely affect others.