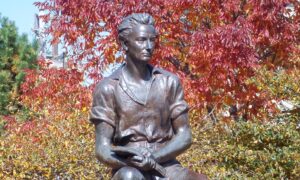 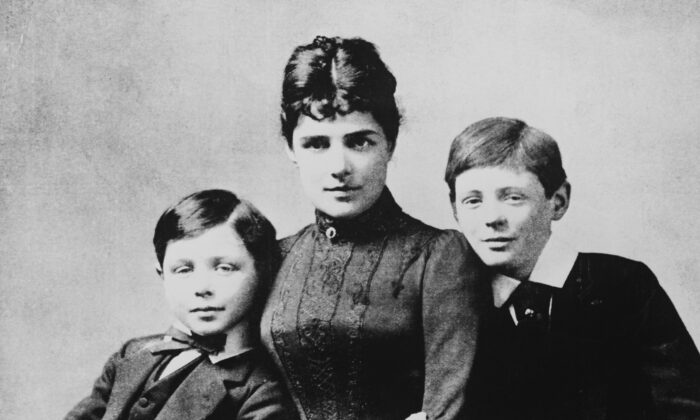 American-born Jennie Jerome Churchill and her British husband Lord Randolph would never qualify for any Best Parent of the Year award.

Though Winston adored his father, Lord Randolph rarely displayed any affection for Winston, considering him lazy and dimwitted. The distance between father and son was enormous. In “Churchill: Walking With Destiny,” biographer Andrew Roberts reports that after a family dinner in the 1930s, Winston said to his own son, “We have this evening had a longer period of continuous conversation together than the total which I ever had with my father in the whole course of his life.” Despite this note of condemnation, Winston revered the memory of his father.

Winston also deeply loved his mother, but once again found those boyhood affections ignored or pushed away. The beautiful and vivacious Jennie was as caught up in the social swirl of her time as her husband was in his politics.

During his school years away from home, Winston wrote repeatedly to his mother, begging her to visit him, but was usually ignored. Turning again to “Churchill: Walking With Destiny,” Roberts tells us that “from 1885 to 1892, Churchill wrote to his parents seventy-six times; they to him six times. The huge majority of Churchill’s letters were not asking for anything except, between the lines, for love and attention. Their letters to him on the other hand contained constant remonstrations.”

Because of her busy social life, and like so many others of her class, Lady Churchill turned the rearing of her two sons—Winston had a younger brother, Jack—over to nannies, including Winston’s favorite, Elizabeth Everest.

It was Miss Everest, whom Winston called “Woom,” who showered her young charge with love, cared for him in his illnesses, and often provided him comfort and counsel. Of her, Churchill later recalled, “My nurse was my confidante. It was to her I poured out my many troubles.”

Later, after her death, he wrote, “She had been my dearest and most intimate friend during the whole of the twenty years I had lived.” When she was dying, he sat with her and held her hand until she passed. He attended her funeral, erected a tombstone in her memory, and paid for the care of her grave for as long as he lived.

In contrast, Winston wrote in his autobiography “My Early Life” of his mother “She shone for me like the Evening Star. I loved her dearly—but at a distance.”

All that changed in 1895, when Lord Randolph died. In his absence, the relationship between Jennie and her 21-year-old son took a 180-degree turn. In “The Last Lion: Visions of Glory,” historian William Manchester conjectures that “… she would slowly transfer her devotion to her brilliant, eccentric son. Her passion would run deep and strong, and it would be of immeasurable benefit to him, though it could never be mistaken for maternal love.”

Because of her many social connections—she was known for her wit and charm, had earned a minor reputation as a writer, attended parties and balls, and had also taken a series of lovers—Jennie was able time and again to use her influence and help Winston attain those successes he so furiously sought.

This new bond between mother and son was particularly strong during the years 1895 to 1900. After Winston’s graduation from Sandhurst, Britain’s West Point, Jennie pulled some strings and helped win him a coveted spot in the Fourth Hussars. A writer herself, she used her contacts in the world of print and arranged for Winston to pen dispatches about the fighting he saw in India for the Daily Telegraph. In doing so, Jennie launched him on a writing career that would provide him with economic sustenance for the rest of his life and would eventually win him the Nobel Prize in Literature.

She acted as both agent and publicist for his first book, “The Story of the Malakand Field Force,” again using her many acquaintances in publishing and politics. She later appealed to the prime minister, Lord Salisbury, for Winston’s transfer from India to the Sudan, where he would participate in one of the British Army’s last cavalry charges and would write another book, “The River War: An Historical Account of the Reconquest of the Sudan.” On his return from these and other adventures, she worked tirelessly to put him in touch with politicians, hoping to boost him into Parliament.

On winning election to Parliament, Winston wrote a note to Jennie stating, “I could never have earned it if you had not transmitted the wit and energy which are necessary.”

‘A Great Believer in Your Star’

Jennie demonstrated that wit and energy through the letters of encouragement she sent to her son. She supplied him with the books he requested while in India. She sent notes filled with advice and admonitions. In late 1915, after Churchill’s idea of attacking Germany through the Dardanelles had failed and he was serving on the Western Front, Jennie wrote to him, “I am a great believer in your star.”

Even in practical matters she proved invaluable. She gave assistance in furnishing his rooms, finding a secretary, and assisting personally with his early political campaigns.

Of this period in his life, Winston later said, “My mother was always at hand to help and advise, but I was now in my twenty-first year and she never sought to exercise parental control. Indeed, she soon became an ardent ally, furthering my plans and guarding my interests with all her influence and boundless energy. She was still at forty young, beautiful and fascinating. We worked together on even terms, more like brother and sister than mother and son.”

When Jennie Jerome Churchill died in 1921, her son arrived at her bedside too late to say goodbye to the woman who had meant so much to him in his youth and had promoted his ambitions. After all the ceremonies, the man who went on to become the greatest of England’s prime ministers stood alone beside his mother’s grave, wept, and dropped a spray of roses onto the coffin.

On battlefields around the world soldiers have cried out for their mothers as they lay dying. And memorably, Abraham Lincoln once said, “All that I am, or hope to be, I owe to my angel mother.” In “The Hand That Rocks the Cradle: Mothers and Sons,” we will look at a number of famous men strongly influenced by their mothers. Not all these women were angels, but their love, disposition, and sense of principle left an indelible stamp on their sons.