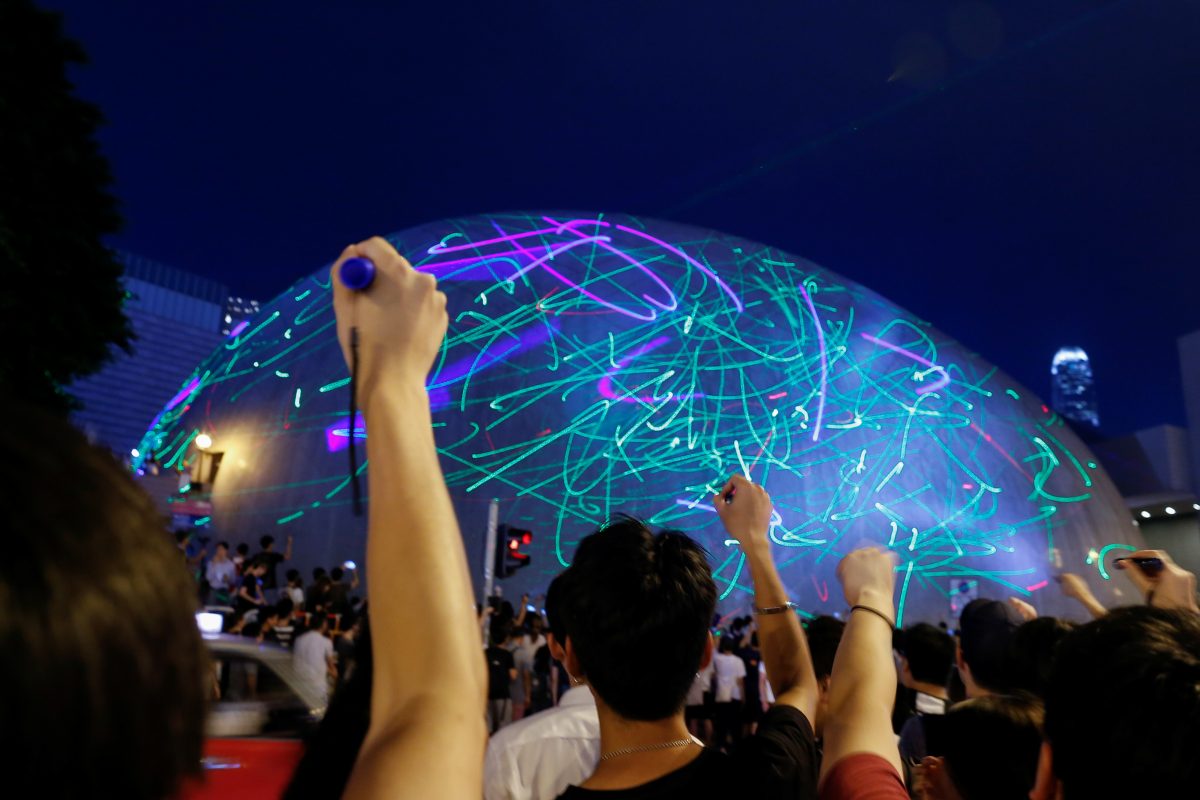 People watch the dots of laser pointers move across the facade of the Hong Kong Space Museum during a flashmob staged to denounce the authorities' claim that laser pointers were offensive weapons in Hong Kong, China on Aug. 7, 2019. (Thomas Peter/Reuters)
Travel

HONG KONG—The United States raised its travel warning for Hong Kong, urging increased caution by visitors to the Chinese territory in the face of what it described as civil unrest after months of sometimes violent street protests.

The protests in the Asian financial hub began with opposition to a now-suspended extradition law and have evolved into a direct challenge to the city’s government and calls for full democracy.

“The protests and confrontations have spilled over into neighborhoods other than those where the police have permitted marches or rallies,” said the advisory, posted on the website of the U.S. state department on Aug. 7.

“These demonstrations, which can take place with little or no notice, are likely to continue,” it added. The advisory was raised to level two on a four-point scale.

Australia also warned its travelers in an updated advisory.

The protests pose a grave popular challenge to Chinese leader Xi Jinping since he came to power in 2012. Xi is also grappling with a debilitating trade war with the United States and a slowing economy.

The protests have left Hong Kong facing its worst crisis since it returned to China from British rule in 1997, the head of China’s Hong Kong and Macau Affairs office said.

More protests are planned in several districts across the city this weekend, starting on Friday, with demonstrators also planning a three-day rally at the city’s international airport.

Police warned activists to protest peacefully and said they had detained three more people, raising the number arrested to nearly 600 since protests began in June, the youngest aged 13.

Protesters want the city’s embattled leader Carrie Lam to categorically withdraw the extradition bill, and an independent inquiry into the government and the police handling of the controversy.

Lam, who says the bill is dead but has not withdrawn it, visited some districts on Wednesday to speak with residents and inspect a police station recently targeted by protesters.

The government would put forward measures to improve people’s livelihoods, she said in a statement after the visit.

Young people are at the forefront of the protests, worried about China encroaching on Hong Kong’s freedoms. The city is already battling problems such as sky-high living costs and what people see as an unfair housing policy favoring the wealthy.

The normally efficient and orderly city has seen its transport network besieged and shut down by demonstrators, while protests have shut big-brand stores and popular shopping malls.

Three masked activists, who did not give their names, held a news conference on Thursday, their second this week and broadcast on domestic television channels, to criticize what they called arbitrary arrests and police use of tear gas.

“The continuation of such attempts at spreading fear and suppressing the freedom of press will eventually backfire on the government itself,” one activist told the Citizens’ Press Conference, a platform protesters are using to voice concerns over the situation in Hong Kong.

“The ultimate victim of these tactics will be the police force’s crumbling public image,” said the activist, who spoke in English.

The comments came after plainclothes police arrested a student leader from Baptist University, Keith Fong, on the grounds that laser pointers he bought were offensive weapons.

On Wednesday night, hundreds of protesters held a rally and shined lasers on the dome of the city’s Space Museum in Tsim Sha Tsui, demanding Fong be released, and mocking the police’s description of the pointers as “laser guns.”

Several thousand Hong Kong lawyers, dressed in black, marched in silence on Wednesday to call on the government to safeguard the independence of the city’s department of justice.

They fear the justice department’s prosecutions of arrested protesters are taking on an increasingly political slant. Many of those arrested have been charged with rioting, which carries a 10-year jail term.

Protesters have started to use increasingly diverse tactics to evade capture, shifting quickly from place to place and using online platforms such as Telegram to direct thousands of people.

They also circulated brightly-colored pamphlets online ahead of the airport demonstrations, aiming to help tourists understand events, in which they vowed never to surrender.

“Dear travelers, please forgive us for the ‘unexpected Hong Kong.’ You’re arrived in a broken, torn-apart city, not the one you have once pictured. Yet the city you imagined is exactly what we are fighting for,” the pamphlets said.