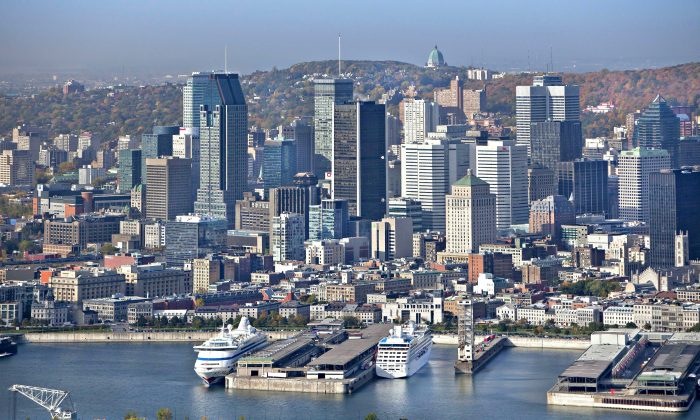 Montreal skyline and the St. Lawrence River. The city is celebrating its 375th anniversary with a plethora of events throughout the year. (Tourisme Montréal, Stéphan Poulin)
Destinations

Montreal Tunes up for 375th Anniversary

Montreal is buzzing with energy as it heads into the Big Event of 2017: the 375th anniversary of the city.

Monrealers are justly proud of their city and want to show off its multi-cultural achievements to the world. So come one, come all and take advantage of the many indoor and outdoor events planned to enthrall native and visitor, child and adult alike.

A sampling of events planned for the first three months of 2017:

Igloofest: an outdoor dance party held under the stars at the Old Port on Thursday, Friday, and Saturday evenings for a limited time, so put on your dancing snow boots and join in the fun. https://igloofest.ca/

Montréal en lumière: a cultural and fine food festival featuring feasts for all the senses. This event is held annually and this year should even be more exciting based on the entire city celebrating its anniversary. http://www.montrealenlumiere.com/

In order to make a soufflé you must break some eggs, and the city is currently undergoing major construction upheavals, all in anticipation of the many planned events. Streets are being enlarged and/or rerouted to help traffic flow better, but beware drivers: there is a traffic speed trap for out-of-country and rental cars on the major artery Autoroute 10/20 entering the bridge into the city. This is a word of caution because nothing puts a damper on enjoying all that Montreal offers like a speeding ticket on entering the city.

The tower’s top three floors showcase three must-sees: Les Enfants Terribles on the 44th floor, the hottest restaurant in town where reservations are a must; the Observation Deck on the 46th floor, which provides a 360-degree view of the city and is especially awesome at night; and the interactive exhibit #MTLGO on the 45th floor that is fun, informative, and entertaining for all ages.

You could spend hours playing—and learning about the city—on #MTLGO’s interactive screens separated by category. You can even send yourself a text or email for a self-directed “pokemon” sort of experience (ask one of the attendants for the “missions” link).

Also in place is Cité Mémoire, a free mobile map that leads you through a walking tour and performance-art scene of Old Montreal, where characters are projected on buildings acting out the history of the city. It’s best at night when the projections stand out, but if you are unfamiliar with the winding streets and lanes, take in the show during the day. Make sure to have your ear-buds with you as a soundtrack is available in four languages that activates with the free WiFi hot spots scattered throughout the area.

Museum of Fine Arts, The Main

Montreal is a city of neighbourhoods. Our recent stay was at the Hotel Omni Mont-Royal in the Golden Square Mile. This is the ultra-luxe section of the city where high-end designers have their stylish salons and art galleries feature top international artists. Here too is the Montreal Museum of Fine Arts. The museum recently opened its modern tower across Sherbrooke Street from the original Beaux Arts building, with underground access to both buildings. Museum entry is through the new building.

We explored St. Lawrence or St. Laurent, the city’s main boulevard nicknamed The Main, which back in the day separated the French and English quarters of the city. It was the go-to neutral zone for emigrants not wanting to be seen as “choosing” one side or the other in what was an often contentious relationship. Here, the Chinese, Eastern European, Italian, Portuguese, Spanish, Latin American, and North African emigrants planted roots.

Today, walking along The Main is a cultural and food fantasy experience, and with a guided tour you get the history of the area.

We enjoyed the commentary by a guide from Fitz and Follwell’s Flavours of the Main Culture and Food walking tour. Especially delightful was the story about Russian immigrant Harry Wilensky who in 1932 opened a barber shop that quickly became a centre for male gatherings. Of course, the men got hungry expending so much energy socializing, so Wilensky started to grill slices of baloney, slap them on a soft bun with mustard, and a must-have tradition was born. The barber shop eventually became Wilensky’s Light Lunch, a cafe still run by the Wilensky family.

Cabs are numerous and readily available but the transit system is also a rapid, clean, and efficient way to get around. The metro is clearly marked and the trams navigate above-ground covering all areas handily—that is once the construction cones have been removed.

Pack your appetite, your sense of adventure, good walking shoes, and join the party.

For more information, visit the Tourisme Montréal website at www.tourisme-montreal.org