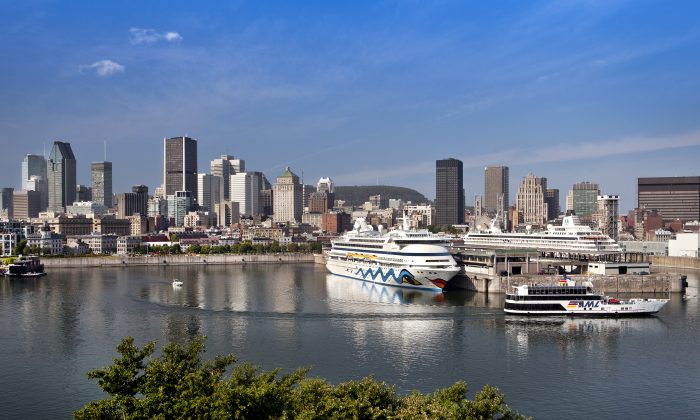 Montreal: A Treasure Box Waiting to be Discovered

Pay a visit to Montreal any time of year and for sure there will be something to enjoy. It is a vibrant city that brims with culture, nature, fine dining, and most of all, joie de vivre—or what the French call “the joy of living.”

I arrived in the city last June just in time for the opening of the Montreal Jazz Festival, the largest of its kind in the world, attracting millions of people every year. This year’s festival, the 36th edition, runs from June 26 to July 5.

There was a group of six of us, and we walked 15 minutes from our hotel for a quick dinner before the outdoor opening night concert. The restaurant choice was Le Contemporain, housed in the Museum of Contemporary Art in the heart of the festival site. It was a beautifully warm night and we ate on the terrace, savouring a meal that was delicately prepared and decorated with herbs and blue cornflowers.

After dinner we headed for the concert. The street was packed with thousands of people filled with anticipation. The crowd began swaying to the beat as the French performer Woodkid launched into a mellow, well-orchestrated song. The spirit of the city and its people was in the air and I let myself be absorbed by it.

Needing some rest after a long day’s travel, I left the concert early and made my way to the elegant Marriott Chateau Champlain with its half-moon windows and wonderful views located in the heart of downtown just a short walk to Old Montreal.

As much as Montrealers love their culture scene, they also love the opportunity to connect with nature.

From Bagels to Cirque

The next morning we took a driving tour of Montreal, which included a trip to the refugee housing area for a view of the city’s graffiti, a captivating drive on the Formula One race track, and a stop at a cliff-top observation point to take in the stunning sights of the city. We stopped for lunch in the trendy district of Le Plateau near Mont Royal.

There I learned that Montreal is famous for its fine bagels, known to rival those of New York City. We ate at St-Viateur Bagel & Café, which, alongside nearby Fairmount Bagel, is one of the world’s best bagel shops. Montreal’s bagels are sweeter and denser than the New York variety, and baked in a wood-burning oven. My sesame-encrusted bagel sandwich was truly delicious.

The rest of the afternoon was spent relaxing before meeting for dinner on the outdoor terrace at the Vieux-Port Steakhouse in Old Montreal. With full bellies and feeling satisfied, we proceeded to take in a performance by Cirque du Soleil, walking just a few minutes to the port where the Cirque had set up its signature blue and yellow tent.

It was my first Cirque show and I was impressed not only by its creativity but also by the performers’ incredible feats of artistry and daring. For all the imaginative costumes and elaborate sets, it was more than simple entertainment.

I felt that the Cirque was a lot like Montreal, its headquarters—creative, eclectic, passionate, and presenting wonders at every corner.

Another highlight was Saute-Moutons, the jet boating experience on the St. Lawrence rapids, an adventure where the waves leave you soaking wet, thrilled, and with just a little less inhibitions. Founder Jack Kowalski directed the orientation session in English and French, providing us with the necessary equipment to ride the waves safely, even considering those who didn’t research enough to bring an extra set of clothes.

For those who wanted photos to recall the experience, Anton Fercher, a professional photographer was on hand to take pictures. I chatted with him briefly afterwards and learned that he is also a culinary artist, organizing photographic cooking outings at his small farm outside Montreal when he is not snapping commercial photos of tourists.

On our last night in the city we had dinner at Da Emma, an Italian restaurant by the harbour housed in a former women’s prison. We enjoyed a hearty Italian meal, engaging waiter, and pleasant atmosphere on the terrace. We also got to meet Emma, the restaurant’s owner, who spends her days hard at work in the small kitchen. This experience made me realize part of what makes this restaurant popular. Humbly welcoming us into her kitchen, Emma’s face lit up in a bright smile. Speaking of joie de vivre, Emma exudes it, and I found it contagious.

Leaving the restaurant, I took in the night atmosphere and noticed the many riders making the most of the city’s extensive network of bicycle paths and lanes. As much as Montrealers love their culture scene, they also love the opportunity to connect with nature. That may explain why so many of the city’s activities are outdoors.

I spent my last day in Montreal at the Fine Arts Museum where a colleague and I visited the Fabergé exhibit running at the time, appreciating the chance to explore the museum’s other collections as well. From medieval times to the 20th century, we discovered many historical treasures including a fine tribute to Napoleon.

Later, we wandered into a pub to grab a bite and take in the latest World Cup game—Mexico vs. the Netherlands. As we were enjoying our meal, the room suddenly erupted with shouts of victory as the Netherlands scored, and we felt swept up in the spirit of the World Cup and the lively banter of the pub patrons.

It was just one more enjoyable experience in Montreal—a city where a treasured moment lies at every step, waiting to be discovered.