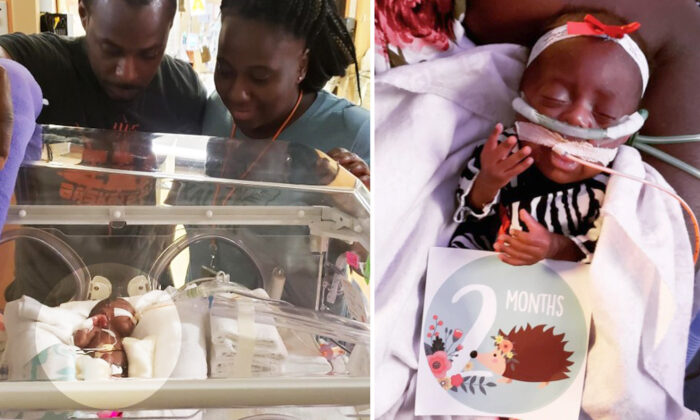 Like any mother, Ebonie Bender was thrilled to be pregnant despite all the ups and downs it can bring. But during the 24th week of her pregnancy, a routine ultrasound called everything into question.

“Hmmm, the baby doesn’t really have any fluid around her,” the mother recalled the ultrasound tech saying in her blog. “Instant mood change. Instant fear. Instant questions,” the mother described. Something was very, very wrong.

Ebonie was diagnosed with absent end diastolic flow, which, as Dr. Vinit Manuel, who treated her at St. Joseph’s Hospital in Phoenix, explained to KTAR, is “when the blood flow is reduced or reversed from the placenta to the unborn baby, preventing them from getting the nutrients they need.”

The unborn baby, who came to be named Kallie, wasn’t growing and would be in serious danger if she stayed in the womb. So doctors decided to deliver her prematurely 15 weeks ahead of schedule, and she barely weighed 13 ounces (approx. 369 g) upon arrival. Neither she nor her parents gave up, though, and Kallie has finally managed to make it home.

Ebonie already had three boys, who are now aged 18, 15, and 12. But her latest pregnancy wasn’t like any she had had before. Once her rare condition was discovered, it took doctors just three days to decide on a C-section and early delivery. “That was the scariest thing for me to know, if she was born early and even smaller than the 13 ounces we thought she was, then what her survival chances were,” she said.

Ebonie practically lived on the 5th floor of St. Joseph’s Hospital in the high-risk-pregnancies ward. This was followed by an equally difficult period after Kallie’s birth. She was just 10.5 inches long, shorter than an average barbie doll, and she had a heart condition that required surgery.

As Ebonie wrote, “But she was here … and with God on her side, Kallie Skye was ready to fight for her life!” Babies born as early and as small as Kallie typically have a very low survival rate, ranging between 9 and 17 percent, according to global survey data.

The challenges were numerous. She had a heart condition typical of preemies that required surgery. “Doctors were not even sure if their equipment would be small enough to intubate Kallie,” Ebonie explained on a GoFundMe page she had set up to help cover the costs of Kallie’s 150-day stay in the NICU. Then there was the issue of Kallie needing constant oxygen to help her underdeveloped lungs keep up. Besides that, she went through periods of rejecting both her mother’s milk and formula.

Ebonie and her husband, Dameon, managed to face the difficulties by learning more about Kallie’s condition. “Being educated helped us to stay more calm, each day was a new journey and we were super excited for her,” Dameon told KTAR.

“Over the last few months, it was amazing to watch her grow and see how she would have been developing inside the womb,” mom Ebonie said.

Ebonie created an Instagram account for her baby, which has helped her keep track of the impressive milestones that her daughter has reached. At 37 days, the parents were finally able to safely hold Kallie, which meant the world to them.

Dr. Vinit Manuel, who supervised Kallie’s miraculous journey from delivery to her eventual exit from the NICU, complimented the parents’ resolve, attending their child constantly despite living some 40 minutes from the hospital, in the suburb of Gilbert. Manuel told the Daily Mail, “They have been involved from day one, being at the bedside, doing skin-to-skin contact, reading to the baby, playing music.

“It’s not easy to quantify, but research has shown the more families get involved, the benefits [for the baby] are huge.”

Besides doing everything they could to help Kallie get better, her parents frequently took the opportunity to express their gratitude for having her.

Now, the family has the luxury of having their baby at home at long last. While it’s not the end of Kallie’s struggles, doctors say that she has no lasting issues from Ebonie’s condition and should develop normally. The baby has finally made it up to 7 pounds (approx. 3 kg), and the Benders are optimistic about the future.

As Ebonie told KTAR, “We are looking forward to having more independence and creating new memories as a family of five.”