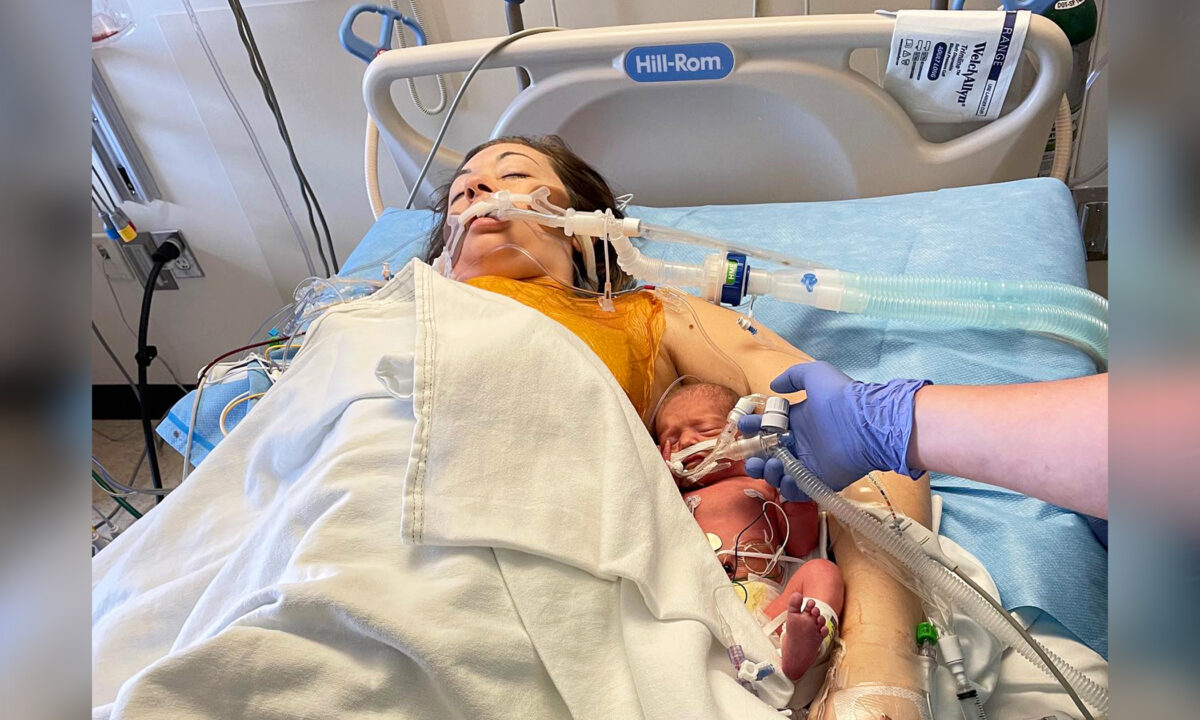 A new mom, whose life hung in the balance after a critical heart condition forced her to deliver early, saw her vital signs improve when her newborn was placed in her arms. Both she and her baby fought for their lives, overcoming their tribulation together.

Veronica Williams of Covington, Kentucky, learned that she and her husband, Sean, were expecting a baby in August of 2021. Veronica had no signs of heart disease during her pregnancy, and the shortness of breath and swelling she did experience “seemed like normal pregnancy symptoms.”

However, on March 8, Veronica’s Apple Watch picked up a high resting heart rate. The following day, she had the same alert multiple times, and her shortness of breath became worse. Thus she went to the hospital at 5 p.m. that day.

“My husband and I thought it would be a quick trip,” Veronica, 27, told The Epoch Times. “After writing my doctor through MyChart, I was told to go to the emergency room. Of course I listened, due to being pregnant and wanting to make sure my daughter was okay.”

With Sean, 26, by her side, Veronica was admitted to Kentucky’s St. Elizabeth Healthcare for monitoring.

“This entire time I felt fine, and was even sitting there with my husband smiling and laughing at a TV show we were watching,” she recalled. “The last thing I remember is the doctors coming in to ask permission to do an emergency C-section.”

Brooklynn Jean Williams was born via Caesarean section in the hospital’s cath lab on March 9, weighing 4 pounds 2 ounces (approx. 1.87 kg). Eight weeks premature, Brooklynn was rushed into a controller incubator in the NICU to use a CPAP oxygen machine and feeding tube.

Meanwhile, Veronica was diagnosed with lymphocytic myocarditis, an inflammatory disease of the heart. With her status being critical, doctors made a decision.

“The doctors were prompted to place my daughter in my arms due to the unknown—if I would make it out alive—and wanted to give the chance for a mother and daughter to meet,” Veronica said.

According to Veronica’s care team, when baby Brooklynn was placed in her mother’s arms, Veronica’s vital signs improved.

Cardiac surgery recovery-nurse manager Lindsay Calderon told WCPO, “This is one of those times that St. Elizabeth stood up and took the opportunity to do what was best for mom and baby, and that meant stepping out of our comfort zone. That meant doing things we’d never done.”

While Veronica lay unconscious, the presence of her baby subdued her symptoms. “It was like nothing any of them had ever seen; there was not a dry eye in the room,” she told The Epoch Times.

When Veronica woke up, she had been transferred to the University of Cincinnati Medical Center with her husband and father by her side. She was intubated and unable to talk.

“My husband told me that our daughter was delivered and doing great. He was showing me pictures of her, as well as showing signs that the NICU team had made for me with pictures and little messages from her,” Veronica recalled. “I was so relieved that she had made it and was such a fighter!”

Three months on, both Veronica and Brooklynn are doing well. Brooklynn has doubled her birth weight and shows no signs of trauma after her traumatic entry into the world. Veronica, who has undergone multiple heart surgeries, is making strides every day.

On leave from her full-time job as talent acquisition coordinator for St. Elizabeth Healthcare, Veronica is taking motherhood and recovery one step at a time.

Sean’s father has started a GoFundMe fundraiser to help the young family cope with their medical bills and lost wages. Veronica, who feels “beyond blessed,” shared on Facebook, “All the love and support my family and I have received during this time is unbelievable … power of prayer truly is amazing, and has given me a second chance at life that will not be wasted.”

Veronica and Sean have known each other their entire lives, as their grandparents were neighbors in their hometown of Florence, Kentucky. However, they only started dating in their senior year of high school in 2013, and married in the fall of 2019.

Besides the miracle of her baby girl’s birth and the impact of her own recovery, Veronica hopes her experience encourages other women to take all symptoms seriously.

“I would like to share with readers to listen to their doctors,” she said, “and do not ignore anything that is abnormal for you, especially when pregnant.”