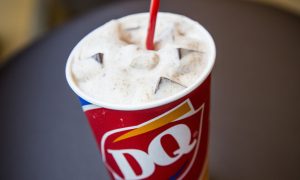 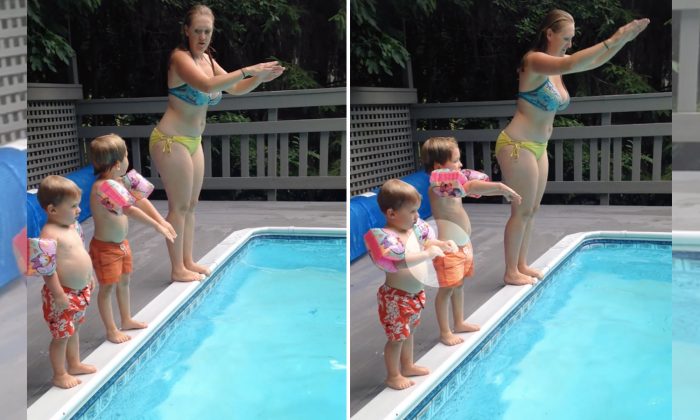 Mom Teaches Kids How to Dive, but Her Second Child Has Other Hilarious Plans

As temperatures increase in most states across the United States, what better time to head to the pool? For little ones, that might mean having their first swimming lessons, or even learning to dive.

For two young boys in Asheville, North Carolina, being lucky enough to have a pool in their own backyard meant limitless access to fun in the sun. But while some kids are natural water babies, it’s pretty fair to say that one of these boys has, well … a pretty long way to go!

“OK OK, I’ve been convinced to post this finally,” said the boys’ mom, Corina Casanova, in her original post on Facebook. Corina decided one day to teach her two children to dive.

Strapped into brightly colored, buoyant arm bands, the boys watched their mom’s expert demonstration. Corina, keen to boost her little boys’ confidence, showed them how fun it can be to dive into the pool. She hoped that the two fearless tots would follow her lead.

In the viral clip, the Casanovas stand at the edge of the water and Corina gives a count of “1, 2, 3,” before gracefully leaping into the cool water, arms first. After her demo, Corina’s older son attempts to copy her by lifting his own arms and producing a pretty convincing dive into the pool.

Corina’s younger son, Deacon, is left behind. The solemn tot looks a little crestfallen at being left on his own, but someone in the background can be heard encouraging him with, “Go ahead, Deac!” Deacon is up; he summons all of his courage and tries his very first standing dive.

Standing with his arms stiff at his sides (erm, not quite the way your momma showed you, Deacon!) the brave little boy stands straight as a post and proceeds to lean all the way forward into the water below. With all the elegance of a beached whale, little Deacon performs the belly flop of the century.

We simply can’t get enough of this side-splitting, slapstick moment. “Go big or go home,” they say? Deacon went colossal!

To everybody’s relief, the brave little lad emerges milliseconds later with a grin on his face. He’s fine! And he’s loving the atmosphere that his poolside gaffe has created; everybody around him is in fits of giggles.

Read More
How to Motivate Kids to Practice Hard Things
Never Share These Photos and Information of Kids on Social Media: 5 Hacks for Parents

So’s the internet. “Yep. Get in to the water,” wrote one Facebook fan. “Finesse comes later.” Others felt an affiliation with the little man in the most comical way. “I feel like the last kid is just me trying to get through life,” wrote one sardonic commenter.

“That’s how I feel showing up to work on Mondays,” wrote another. Do we smell a meme? Unleashing an epic faceplant onto a pool full of water is a metaphor that thousands of disillusioned office workers could get behind!

Corina was bowled over by the responses to her boys’ first diving lesson. “Hi all, and thank you! Totally unexpected,” she commented. “Our cutie pies just being themselves. Thanks for all the great comments!”

Since the delightful clip was shared with Storyful on YouTube, Corina’s 19-second video has gone viral, entertaining millions. “So glad this is making so many people smile, like it did us,” said the happy mom. Still, we think a few professional diving lessons for her fearless little critters wouldn’t go amiss!

This young swimmer is braver than you 🤣Credit: storyful