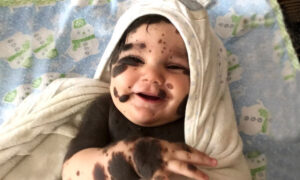 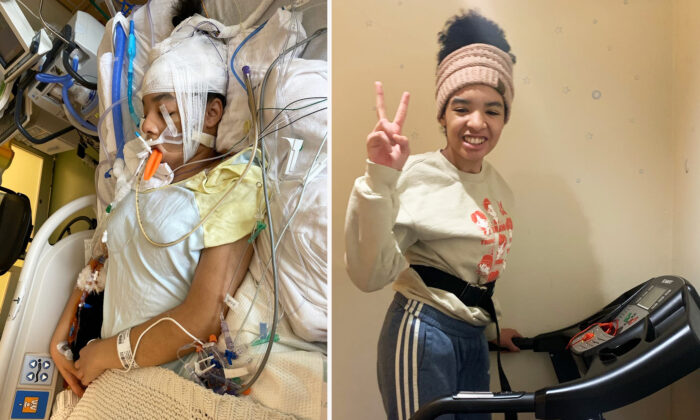 A mother who was told her teenage daughter may not survive a massive, sudden brain aneurysm insisted she be transferred to a different hospital, and never left her side. Miraculously, the teen survived. Now, her family is celebrating her gradual steps toward recovery.

Fifteen-year-old Mionna Johnson of Canton Township, Michigan, was a healthy honor roll student who spoke three languages when she collapsed suddenly at her home in September 2020.

“We were in the living room just singing and dancing to her favorite K-Pop group, BTS,” Johnson’s mother, Tiffany Bernard, told ClickOnDetroit. “[S]he just fell to the floor and said, ‘Oh my God, my face looks like my brain just exploded.'”

Johnson was rushed to the ICU at Beaumont Hospital where doctors suspected a brain aneurysm, a condition where a bulge or ballooning in a blood vessel in the brain is caused. A brain aneurysm can leak or rupture, causing bleeding into the brain, according to Mayo Clinic. Doctors warned Bernard that her daughter may not survive, but the mother would not take no for an answer.

“I knew it wasn’t over,” she said, “and that’s why I started demanding she go somewhere else.”

Johnson was airlifted to Children’s Hospital of Michigan. Knowing that her daughter may not make the trip as doctors had warned, a worried Bernard drove from Westland to Detroit in a panic. “I knew I wouldn’t make it, but I wanted to see if she would still be alive,” she explained, describing the drive as “horrible.”

Incredibly, Johnson survived the airlift and was rushed into surgery. But a new fear surfaced among the family: the teen may never regain consciousness, and if she did, she would likely be paralyzed from the neck down.

Bernard sold her salon and spent the next 117 days to be by her daughter’s side. Doctors briefly feared the teen was brain dead, but Johnson pulled through. Not only that, she even regained consciousness.

“I’m so happy … I’m just happy,” said Bernard. “I knew that the doctors could only take us so far. And then I had to have, you know, I had to have my faith.”

In the months that followed her sudden collapse and hospitalization, Johnson embarked on intensive physical therapy. Against the odds, she is slowly regaining her mobility.

“She’s getting her strength back,” said her mother. “She’s able to stand and walk … it’s a miracle, honestly.”

At the end of December 2020, her father, Justin Johnson, shared an update on her progress on Facebook. “Tomorrow, Mionna (my baby) will be having her second swallow study which will show how the function of her swallow is working,” he explained.

The study, he said, would determine both his daughter’s diet moving forward and the likelihood of having her gastric tube removed.

“As you know, Mionna has done a terrific job overcoming this obstacle, and there is no doubt in my mind this is the next victory in her journey to full restoration,” said her father. “She just asked me if I would pray for her tonight, and I said I’ll do one better and have everyone pray for her!”