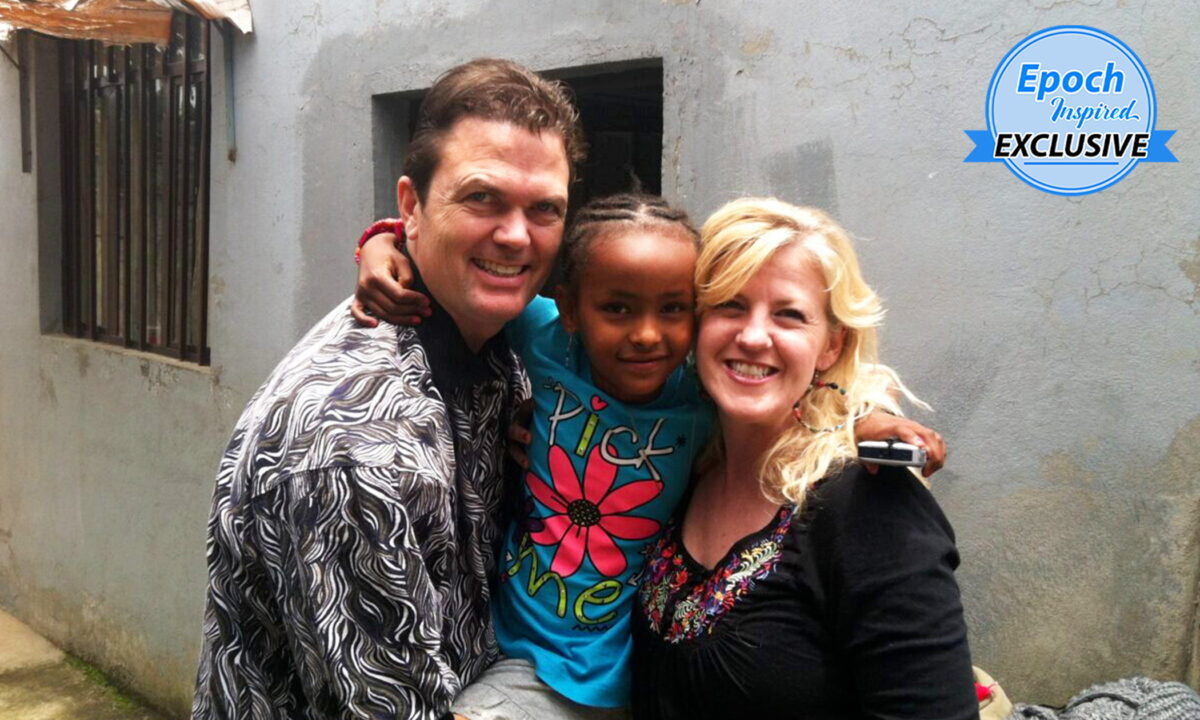 Mom Rescues Ethiopian Girl at Risk of Abduction by Satanist: ‘God Was in This Battle’

'It's a story written in heaven,' says the mom of four
BY Louise Chambers TIMEAugust 17, 2022 PRINT

After adopting an orphaned boy who had escaped slavery in Ethiopia, a Tennessee mom began dreaming of a girl child. Coming across a photo of a 7-year-old orphan in need proved her dream had been a premonition, but after traveling back to Ethiopia to adopt the child, a battle began.

The girl, named Favor, was withheld, and feared at risk of being fostered by a known satanist. Mom-of-four Missy Maxwell Worton, of Franklin, refused to leave Ethiopia without her daughter; bolstered by faith, she eventually succeeded.

“It’s a story written in heaven,” Missy told The Epoch Times. “We saw a need. We went and we rescued Favor from a situation that was going to steal her destiny, possibly her life if she had gotten into this man’s hands.

“Our faith came by knowing that God was in this battle. He had sent His war angels to fight on our behalf.”

Their adoptive daughter is now a happy, confident, and thriving 17-year-old. “I cannot say enough about this little girl,” Missy said. “She was created from greatness. She wants to be an attorney, and she wants to fight for those who have no voice.”

Missy, who was raised in the church and has spent her life nurturing a relationship with God, has compiled the story of Favor’s adoption into a book, “Don’t Mess With This Mama: Risking It All to Rescue Our Daughter.” She is now an award-winning author, speaker, and coach led by faith, who fights for the rights of orphans and fostered children, victims of trafficking, and the unborn.

The call to adoption came to Missy after giving birth to two biological children: a son and a daughter. Missy shared that she wasn’t certain she even wanted to be a mom until a near-death experience during labor with her firstborn, Matthew.

“I had what’s called labor-induced hypertension,” she said. “I literally had a stroke, I flatlined, and I experienced starting to pull away from my body. I was like, ‘I’m not ready, I want to be a mom!’ From that moment on, I shifted mentally … I need to make a difference with my life.”

Living in Franklin, Missy grew close with her neighbor, a woman who made one of the first successful U.S. adoptions from Ethiopia and eventually adopted five children. “My heart immediately wanted that,” said Missy. She and her husband began by adopting a little boy, named Shewit, from an orphanage.

Missy’s dream of a little girl, in a pink and yellow dress with her hands in front of her, praying, quickly followed. They thought she had dreamed of Shewit’s younger sister, but his sister had already passed away. “We can only imagine what happened. I’m sure she went into slavery,” Missy said. “Shewit was in slavery. He was sold to be a shepherd boy, and he escaped that.”

It was the daughter of Missy’s neighbor who first showed her a photo of Favor. When she and her husband, Mark, saw the picture, Missy said, she felt she already knew the girl. She believes it was God’s plan to let her see her would-be adoptive daughter in dreams so as to strengthen their faith and prepare them for the arduous journey ahead.

“We saw a little girl in a pink dress, exactly what I had been dreaming for two years. I immediately knew her,” Missy recalled. “My heart stopped, and I said, ‘I know her.’ My husband was like, ‘What do you mean?’ I said, ‘I have been seeing her in my dreams for two years now. This is our daughter.'”

Missy and her husband flew to Ethiopia to begin their court case on Aug. 14, 2012. Yet, since they had already seen a photo of Favor, their adoption agency refused to refer them. “One of their children had passed away in a home, and it was a pre-identified child,” Missy explained, “so they didn’t want anything to do with with helping people get a pre-identified child.”

But the couple persisted. Missy said they held strong to their faith and God “moved a mountain” to get them a reputable referral. Favor was healthy, joyful, feisty, and had been well taken care of by her orphanage. She spent a week with her new parents and her new 12-year-old sister at their hotel and they all grew close. The couple’s case was approved by the Ethiopian court, and Favor was officially given their family name.

But right before they were due to leave the country, the orphanage director sat Missy down and broke devastating news.

The adoption had been revoked, they were told. A local government office wanted four children from the orphanage—Favor being one of them—to place in foster care, which Missy says was a “false foster care” system created in the area.

“The orphanage director tells me, ‘The person who wanted Favor is a well-known satanist in the area, and he’s fostered many children. But all of them mysteriously disappeared, or they mysteriously died. And this is the person that wants your daughter,'” Missy said. “I’m like, why would a 50-something-year-old man want my daughter? She can’t clean. She’s not a good cook.

“That was the last we ever heard about this individual … and when I asked about him later, I said, ‘Do you think all of our trouble is connected to the satanists? He was very powerful.’ She said, ‘Don’t worry about that.’ So they just would not address this. Now that I know about child trafficking, I would say he was very involved. Although I have no proof.”

Missy and her husband were told it would take three to four months to get permission from the embassy to bring Favor home. From back home in the United States, they secured the help of an Ethiopian adoption agency as well as Favor’s biological aunt, who had the right to remove Favor from foster care under Ethiopian law.

With plans developing, the couple boarded another plane to go rescue their little girl.

“We were literally the last plane out of Dallas International Airport before Hurricane Sandy slammed into the East Coast,” Missy recalled. “[Favor’s] aunt was very sick, she was in the hospital when we landed. She got up the next morning, took a three-hour bus ride, went in and got Favor, and brought her back to us.”

Favor was a changed child; her head had been shaved and her spirits were broken. “To this day, we don’t really know why they shaved her head … there’s a lot of things we don’t know,” said Missy. “But it devastated her. She loved her hair.”

After the rescue, another blow came; the adoption agency instructed the orphanage director to retrieve Favor and to not allow the family to leave Ethiopia with her. Missy and her husband went into stealth mode.

“We were sneaking around, we knew eyes were on us. They were watching us everywhere we went,” she said.

The couple checked into a Hilton Hotel as reverberations from the Benghazi attack echoed around them, and Missy happened to spot the very man who had instructed others to take Favor away from them; he already knew about their hotel, she said. The man followed them to their hotel and posted a note under the door, reading, “Your adoption has been suspended, you need to leave the child here.” They rushed to the airport with Favor.

Missy said: “We had a security man that got us all the way to immigration. We checked in, and as we’re going through and handing our passports, all of a sudden the immigration officer looks at Favor, looks at a pink note, looks up, and immediately takes her visa and passport.”

Determined not to lose her daughter a second time, Missy stood her ground. A friendly stranger at the airport, having overheard their situation, offered a helping hand; her daughter would take them to a safe guesthouse run by a Christian family for a night’s rest.

For the next month, they went into hiding, moving to an 8-acre Christian Academy with armed guards. An interaction with Christian pastor Chris Overstreet at a gathering gave Missy renewed hope, when he said, “I just want to encourage you … God has given you favor in this journey.”

Missy was blown away that Overstreet had used her adopted daughter’s name.

“It was faith. Faith is the substance of things you hope for, but haven’t yet seen … and we had people praying in so many countries all over the world, praying for Favor to come home,” she said.

After a month in safe hiding, the family won their battle thanks to the efforts of a lawyer with a very auspicious name: Mesfin. “Mesfin means ‘he who fights for the homeless and the orphan.'”

The couple headed home to Tennessee with the newest addition to their family, and a phenomenal story to tell.

‘Be a Force for Good’

Favor entered the United States at the tender age of 7. She traversed the tricky transition into American life, and a confusing abundance that she had never known, to become a healthy, smart teen preparing for her junior year of high school.

“It took a while for her to transition into the fact that we were not going anywhere,” Missy reflected. “It took us seven years for her to believe that we loved her, and that she was our daughter for the rest of our lives.

“I think our story does a few things. It shines light that the orphan can be taken out of orphanages and put in situations that can be harmful, but what our story is really about is to shine light on the faithfulness of God to those who stand in faith. When we don’t like what’s going on in the world around us, we don’t need to complain, we need to do whatever we can do to change what’s happening.

“We have a small time on Earth, so let’s use every day to be a force for good.”