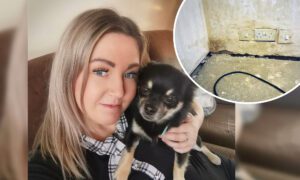 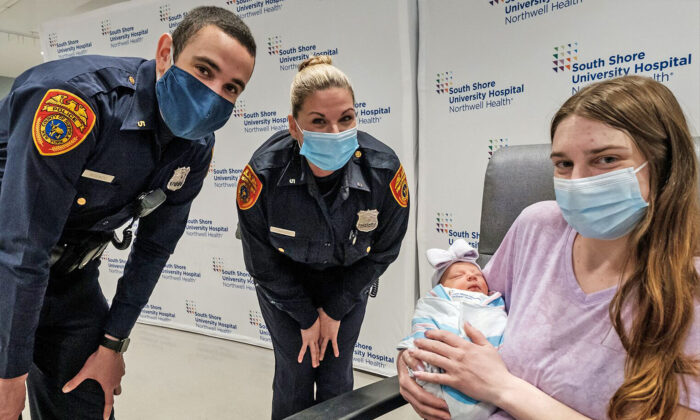 A mom who gave birth to her fourth child on the side of the road with the help of two police officers has honored them in a very special way. Her daughter’s middle name was given after them.

Neither Nicole Gonzalez nor her partner, Robert Notarnicola, expected to have to call 911 when Nicole’s water broke on the morning of March 10.

When Nicole was woken at 5 a.m. by her first contraction, she was not concerned as she had previously given birth to three sons—Jacob, 9, Shawn, 7, and Giovanni, 2—and had been in labor for three days, 12 hours, and 8 hours respectively, Newsday reported.

“I rolled over and tried to go back to sleep,” she recalled. Yet just over an hour later, Nicole’s contractions were six minutes apart. Her water broke as her son, Shawn, helped her to put on her shoes.

Robert, 44, rallied the entire family into their car, a Ford Explorer, and started driving toward South Shore University Hospital (SSUH). He dialed 911, with a frantic Nicole rejecting the dispatcher’s advice not to push.

“I was driving and she felt the baby coming out, and she’s like, ‘I’m not going to make it. You need to pull over,'” Robert told CBSNewYork.

Within moments, Suffolk County police officers and certified EMTs Danielle Congedo and Daniel Rosado arrived on the scene. Robert removed one of the children from the back seat. The officers brought blankets and reclined Nicole’s seat to prepare for the birth.

According to a Suffolk County Police Department Facebook post, Congedo and Rosado have both had fewer than three years on patrol and were only 20 minutes into their shift when the 911 call came in.

“Thankfully, Danielle was there to catch the baby, because there was no stopping her,” said Nicole. “Literally, they pulled up at 7:20 a.m. and by 7:22 my daughter was out.”

“She said, ‘I’m going to have a baby right now,'” Congedo explained, while Rosado claimed, “It’s something I’m never going to forget.”

Anna Bella Danielle Notarnicola, weighing 7 pounds 4 ounces (approx. 3.3 kg) was delivered into Congedo’s arms. The officer remembers “the longest three seconds of my life” as she waited for the baby girl to let out her first cry, which she soon did.

Nicole received a return call from her obstetrician when she was in the ambulance. “I told him, ‘Um, I kind of had the baby already. I had the baby in the car,'” she regaled. “He was like, ‘You’re kidding?’ It’s certainly going to make for a good story for a very long time.”

Lenny Nartowicz, deputy executive director of SSUH, reported to Northwell Health that both mom and baby were doing well.

On March 12, Nicole, with her infant in her arms, reunited with Congedo and Rosado at her hospital discharge. Addressing the officers, Nicole explained, “Danielle and Daniel came to the rescue of helping bring her into the world, and not having to do it on my own before anybody got there.

“We want to honor that, so we decided to name her Anna Bella Danielle,” the grateful mom continued. “Thank you so, so much for being there and jumping in.”

Honored by the title, Congedo said, “Thank you for naming her after us. That is such an honor.”