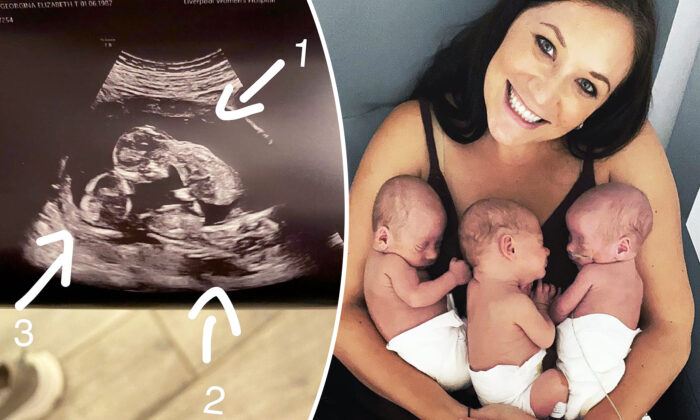 From learning that she was expecting triplets, to identical triplet boys, and then to be presented with the very rare occurrence of them sharing the same placenta, a British mom’s journey into parenthood was peppered with surprises right from the beginning.

Gina and Craig Dewdney’s triplets, Jimmy, Jensen, and Jaxson, are quite literally 1 in 200 million.

The couple, from Cheshire in England, first found out they were expecting triplets at their 13-week scan.

“I thought I might be having twins … although there are triplets in my family, generations back, I didn’t consider it would happen to me,” 34-year-old Gina told The Epoch Times. “I was so shocked. We both couldn’t believe it when three heads suddenly appeared on the scan!”

Sharing a placenta, however, meant that the babies were fighting for the same nutrients, and Gina’s pregnancy was thus considered high risk.

“My journey was a complete rollercoaster,” she said. “I went from having lots of early pregnancy symptoms, such as migraines, insomnia, and extreme exhaustion, to very quickly becoming very big. It got to the point where I found it very difficult to walk.”

Yet, imagining life with two baby girls and a boy—as predicted at her 16-week scan—brought comfort to Gina as pregnancy became hard to bear. However, she was saddened when her 24-week scan heralded a mix-up.

The couple was having three boys, instead.

“I was so upset,” Gina admitted. “I had bonded with the two girls I thought I was having. I had envisioned them, I had named them, and then I was told they were gone! I had to mourn the loss.

“But now, of course, I love having identical boys and wouldn’t have it any other way,” she said.

When Gina went into early labor two months ahead of her due date, Jimmy, Jensen, and Jaxson were delivered by Caesarean section at Liverpool Women’s Hospital on April 26 at 31 weeks and three days. Jaxson was born while still inside the amniotic sac, another incredible rarity; only around 1 in 80,000 babies are born this way.

Gina and Craig had their first tender interactions in the delivery room before the triplets were whisked off to neonatal intensive care. They spent six weeks in the NICU.

Gina, a dental therapist, and 35-year-old Craig, a dentist, marveled at their babies overcoming the high-risk pregnancy and the odds stacked against them. Now 6 months old, the boys are doing well. Jensen and Jaxson have had successful hernia operations, and Jimmy is still on the waiting list.

As her triplets grow, Gina is fascinated by the emergence of three very different personalities, despite their identical DNA.

“Jimmy is the joker, he is always laughing,” she described. “Jensen is the dramatic one! He is also very chatty. And Jaxson is the chilled one; I call him my ‘yogi baby.'”

Having to leave her babies in the hospital and go home to an empty crib was heartbreaking for the new mom, although bringing her babies home introduced a whole new world of challenges such as breastfeeding, sleepless nights, and trying to share herself between the three babies.

Yet, parenting three adorable boys and watching them develop is something Gina and Craig wouldn’t change for the world.

“I have seen them come so far,” said Gina, “from being in the NICU in incubators and tube-fed to now smiling and laughing. It’s an incredibly rewarding journey.”