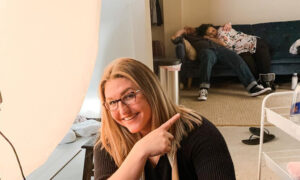 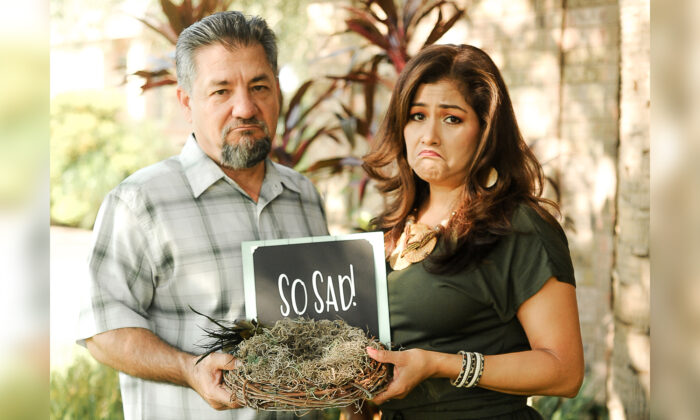 A Texas couple, married for 34 years, has gone viral for a new take on an old tradition. Juan and Dalila Perez, of Pharr, staged an “empty nest” photoshoot to celebrate their new chapter in life after their youngest daughter got married in August.

During the shoot, directed by Texas-based photographer Melyssa Anne Moreno, Juan and Dalila held signs reading “Expecting 0 kids, August 2020,” “So Sad!” “And Then There Were None,” with the latter revealing a hidden twist: “Ha Ha Ha Ha, Just Kidding!”

The images went viral after Moreno shared them on Facebook.

“The hardest part was seeing the first [child] leave because we weren’t ready for the detachment, and it hurts,” mom of four Dalila admitted to Insider. “By the time the last one left, we were ready for it,” she added, knowing that her kids would have “great and productive” lives away from home.

The Perezes were childhood sweethearts and got married more than 30 years ago. Juan, a 53-year-old retired Marine veteran, and Dalila, a 51-year-old nurse, have already made plans for the now-empty rooms in their family home. Dalila is going to turn one of the rooms into a craft room and make more space in her closets by consolidating her four children’s treasured items and giving them to them. Additionally, she also plans to paint the walls of the room according to the color she likes.

Juan has plans, too. “We’re going to enjoy each other and get to know each other a lot better,” he told NBC 4. “Now, we have all the time in the world.”

The couple wants to hit the road on Juan’s Harley Davidson motorcycle and meet other “empty nesters” like them. With the new trailer that they recently bought, the couple plans to visit their grandkids and some national sites.

“All our children [aged 22 to 33] are independent, educated, responsible, and confident,” Dalila told HuffPost, providing more insight on their four children. “We see them as productive to society; all are public servants.”

From eldest to youngest: John is a major in the Air Force, Jacob is a sergeant with the Dallas police, Jonas is an assistant school principal, and Joy, who recently got married, is a teacher currently residing in Corpus Christi with her husband.

Speaking to The Epoch Times via email, Dalila explained that despite their heartache as each child moved out and married, it made her and Juan stronger. “We had to accept that we end up where we started, a party of two,” she said, “and we learned to trust God that our kids will be okay without us.”

“Now, we have to learn to be empty nesters,” she reflected. “No one taught us that either.”

Wishing to share their wisdom and experience with others, Juan and Dalila now record a podcast, Empty Nest Vida, in which they discuss all things parenting, travels, and family values.

She and Juan have also volunteered countless hours for their church and community, and have been directing a South Texas summer food program for kids in need, Jubilee 4 Nutrition, since 2018.

“Being able to uplift others and send positive reinforcement is our priority,” Dalila explained. “We enjoy helping others.”

Photoshoots, podcasts, and philanthropy aside, the family will always come first for the Perezes. Juan and Dalila already share seven grandkids and plan on spending much of their free time enjoying being grandparents.

Their eighth grandchild, on the way, will “add to the mix of giggles and happiness,” Dalila reveled.