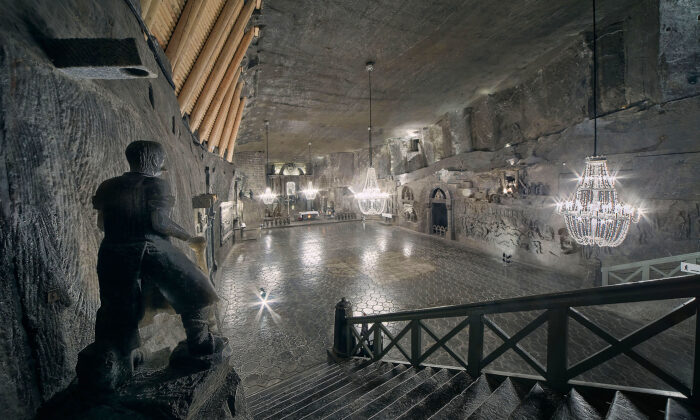 Far beyond the humble kitchen condiment, salt—quite literally—has a history of great depth. One fascinating chapter of that history lies deep below the earth in Poland, where, in the 13th century, it was mined from a location like no other.

The largest of these mines still exists today.

The subterranean site is so otherworldly that it has to be seen to be believed.

A UNESCO World Heritage site since 1978, the otherworldly underground mine has become a hotspot for tourists.

“The corridors and even the floor are made of salt,” Aleksandra Sieradzka, of the mine’s communications department, told Bored Panda. “The chandeliers also contain crystal salt–the purest type of salt.”

In guided tours, visitors may traverse down grandiose stairways, descending into cavernous hollows with vast saltwater lakes and intricate carvings. They are also able to pay homage to four subterranean chapels: St. Anthony’s, the Holy Cross, St. Kinga’s, and St. John’s. Chiseled away by sculptor miners, the altars and statues welcome would-be prayers.

To buttress the uncanny salt works from self-collapse, wooden supports were added as structural reinforcement.

The processing of salt itself, Sieradzka explained, isn’t complex. But it takes an expert to carve salt.

“Every block of salt is different,” he said, “it differs not only in size or hardness, but also in color, which can be used in an interesting way in the act of creation.”

Visitors have long been enchanted by the salt mine’s surreal beauty.

“The walls, the floor, the ceiling, the statues are all salt!” one netizen posted on Bored Panda. “Licked a finger damp, rubbed it against basically anything, and tasted it. Yup, it’s salt.”

“Definitely looks like the Mine of Moria,” commented another. “Let’s hope a Balrog does not live here.”

The Wieliczka Salt Mine—called “Magnum Sal,” or Great Salt, in the Middle Ages—was the largest source of salt in all of Poland and one of the most profitable enterprises in Europe, the mine’s video introduction explains. Salt extraction at Wieliczka continued right up until 1996.

While only 2 percent of the underground salt chambers are open to the public today, the space is much more than an inert museum exhibition. Wieliczka Salt Mine hosts parties and events and is renowned for its annual New Year concert that takes place in January.

“There are a couple of chambers where you can have a party,” Sieradzka said. “One big ballroom [Warszawa Chamber] and a few smaller ones.”

Until the pandemic hit, the mine even hosted Mass every Sunday, and weddings are allowed in some of the chapels. The grounds also host a “health resort” and a four-star hotel aboveground.

Today, as the salt mine is constantly changing over time, engineers labor to preserve this centuries-old, historical marvel for generations to come.