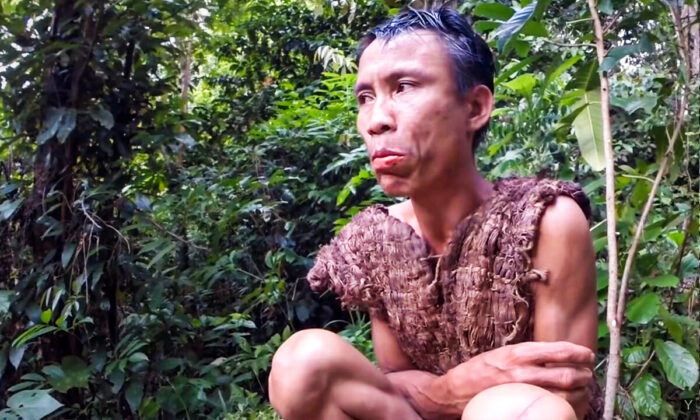 Movies have been made, books written, and urban legends told of humans living deep in the jungle—like Tarzan—having little or no contact with other humans, nor modern society, for decades.

Few will ever have a chance to meet a real-life Tarzan, though one emerged from the jungles of Vietnam relatively recently. And he shared his survival adventures with the world—before venturing grandly to see new sights and experience the outside world.

In 2013, Ho Van Lang, then in his 40s, and his father were found by the Vietnamese Army deep in their jungle home, where they had been living for four decades, and brought back to civilization. Raised in the jungle since he was a baby, Lang acquired what some might call “superhuman” survival skills, which garnered him his nickname the “real-life Tarzan.”

His father, Ho Van Thanh, fled with his son into the jungle in 1972, during the Vietnam War, when he served in the military and his house was exploded by a bomb, killing his family; not once did they look back, but only delved deeper as humans drew nearer.

Lang’s wilderness exploits were brought to light and documented on video in 2015 when Spanish travel guide Alvaro Cerez, 40, sojourned to meet the real-life Tarzan to hopefully learn some survival skills from him. Lang was living in a village where reintegrating into society was a challenge—social concepts were completely alien to him.

Cerez recollected the joint adventure that ensued, as they entered each other’s wonderous worlds with eyes wide open, and shared it with The Epoch Times.

“The connection between us was immediate because Lang never imagined someone could admire his survival skills; therefore, he was proud to show me them all,” Cerez said. “He got so excited that he decided to bring me deep in the jungle and show me the place he had lived all his life.

“We spent one week living at his jungle-home in the same way he did during the past four decades.”

Deep in the jungles of Vietnam, Lang showed Cerez how to do things that were incomprehensible to the guide.

“He was a little kid with the skills of a superhuman,” he said. “When we were surviving together in the jungle, anything that could take me hours to achieve, he could do it in seconds. Climbing trees, making tool, hunting etc. … It was much faster to ask him to do it for me.

Cerez realized what a “fascinating” and “endearing” human being he had found in Lang and adjusted his perspective while they were on their excursion.

“He was extremely sweet,” Cerez said. “Fascinated by his personality, the ‘survival’ took a back seat and I decided to relax and enjoy being with this beautiful human being.”

Food was abundant in the jungle and Lang procured it rather easily: setting up traps to catch rats; ingeniously finding bats hiding in bamboo shoots; and starting fires for cooking with little more than a rock, tinder, and a piece of scrap metal.

He and his father had made tools out of exploded bombs they had found in the jungle, which they used to cut down trees and make other tools. They made clothes out of banana leaves and lived in a tree hut. But Lang’s father had taught his son very little about the outside world. “He didn’t even know females existed,” Cerez said. “His only idea of the outside world were the planes that sometimes crossed him overhead in the sky.

“His dad explained to him that they weren’t birds but hollow objects which had humans inside it.”

Lang was fascinated by this.

That life changed in 2013 when Lang’s brother Ho Van Tri (living in civilization) had them brought back. And Lang experienced being driven in a truck for the first time—which he thoroughly enjoyed.

After their jungle adventure, Cerez shared another journey with Lang in 2018, after his father’s death in late 2017.

“He was his only company and connection to the human world during their time of being isolated in the jungle,” the guide said. “I realized it was time to help him retreat from the village for a little while where he had been living since 2013 …

“Lang was quite curious to know how the sea was and, most of all, he wanted to fly.”

Cerez, originally from Spain, guides tourists to desert islands to enjoy tropical getaways, and offered to bring Lang to one of the islands he frequents.

“During the long journey to the desert island, Lang discovered many new things for the first time, like seeing a big city from a distance while we spent the night in a hotel near the airport,” Cerez said.

“We made sure to avoid walking in the busy streets while being in the city, at all costs. I was always afraid that the emotional impact of finding himself in the crowd amongst people could have been too strong for Lang.”

The following day, Lang “jumped into the plane with enthusiasm” for the first time, and at last saw the world from above, Cerez said, adding that he watched the clouds and the propellers with interest and “couldn’t understand how such a massive object could move while suspended in the air.”

When finally they arrived at the sea, Lang was amazed. His father had told him about it, but he’d never seen so much water stretching from horizon to horizon.

Lang’s least favorite part of the trek was the boat ride to the island. A little scared, he clung to wooden planks and crouched in the middle of the boat. “Seeing himself surrounded by only water was a situation he had never imagined,” said the guide.

“As the silhouette of the desert island appeared, Lang looked at it although understanding what it really was,” Cerez added. “As soon as we landed, Lang’s face lit up.

“The place was filled [with] trees, animals, nature … In other words, it was home. He quickly climbed a coconut tree and brought down a few coconuts.”

The guide spent a number of “marvelous” days of survival on the island with the real-life Tarzan—though the first night was somewhat unnerving for Lang, who believed the island itself, like the boat, was floating and could sink at any time.

“All the islands he saw in the distance were floating for him,” Cerez said. “Among other anecdotes, the one that made me laugh the most was when he woke up one morning all thirsty and, in his sleepy laziness, tried to open a coconut to drink from.

“Failing to do so, [he] went directly to drink the sea water, and got shocked when he found it was so salty.”

Months later, Lang passed away of liver cancer on Sept. 6, 2021, at the age of 52. Recently, previously unseen footage of their exploits—flying, seeing the ocean for the first time, arriving on the desert Island—was released by Cerez for the world to be captivated by.

The clips show a shared sojourn of discovery with a real-life Tarzan—with all the wonder of a child—each tasting the other’s world for the first time.