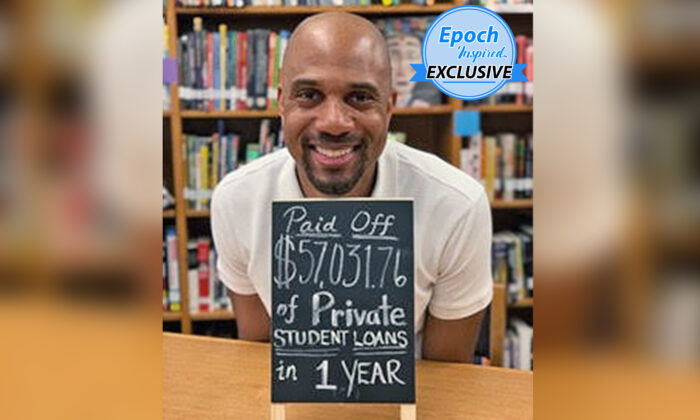 High School Science Teacher Shares How He Paid Off $57,000 in Student Loans in Just One Year

Jonté Lee, a high school teacher from Washington, D.C., went viral in 2020 for turning his kitchen into a chemistry lab to enrich his students’ virtual learning experience. However, he has also made headlines for paying off over $57,000 in private student loan debt in just one year.

In an email interview with The Epoch Times, he explained how.

Lee, 39, teaches chemistry and physics at Calvin Coolidge High School. Known for going above and beyond in the classroom, Lee delighted students during the early 2020 lockdown when he set up a functional chemistry lab in his home kitchen.

However, over a decade ago, Lee was a student himself, amassing huge loans that he would eventually struggle to surmount.

Lee needed a plan and he thus went full-throttle.

“I worked extra jobs,” the teacher explained. “I taught additional classes after school and during the summer … I also drove for Uber and took on extra project jobs that involved teaching.”

However, working at more than one job didn’t come without its own challenges.

“Working multiple jobs was exhausting and there were moments where I wanted to quit,” he admitted. “My original intent was to pay off my student loans in eight months … I had to readjust.”

Lee recalls his biggest challenge as having to change his attitude toward money. He felt embarrassed by the amount of debt he had accumulated.

“I know what it is like to wake up in the middle of the night with a suffocating feeling of fear. I know what it is like to have my credit card swiped and pray that it goes through,” he confided. “For 12 years, I beat myself up about my student loans because I knew that some of that money did not go towards schooling. It went towards me having a good time.”

But after one year of careful planning and immense hard work, Lee officially paid off his outstanding $57,000 debt. He also has eight pragmatic tips for others wishing to get on top of their own crippling debt:

2. Be gentle with yourself. When I took out those student loans, I did not know what I know now. I learned not to judge my past self on my current knowledge.

3. Know that you are not alone. I realized that many people are in the same position that I was in.

4. Use the extra money and your current paycheck to pay down your loans. Paying down my debt required a different mindset when it came to money. I told myself multiple times that I do not have extra money. All extra money went towards my student loans.

5. Look for ways of making extra income. I worked multiple jobs. I taught additional classes, took on special projects, tutored, drove for Uber. Anyway, I was able to make extra money; I did.

6. Do not celebrate until all loans are paid off. I resisted the urge to take a trip or splurge as I was paying off my student loans.

7. Don’t get into debt again. I refuse to go back to school. If I do go back, it will be on a full scholarship, not with loans.

8. If you have multiple loans, decided if it is best to consolidate. Talk to a financial planner.

Having mastered his own relationship with money, Lee also has tips for surviving debt on a personal level. Don’t be embarrassed or judge your past self, he says. But finally, he advises, “do not celebrate your victory until all loans are paid off.”

For Lee, his victory takes the form of being able to devote himself to the career he loves. Once a corporate marketing specialist, Lee has been teaching in Washington public schools for the last nine years.

“My first call to teaching was when I volunteered for the ‘Big Brother Big Sister’ program while working in the private sector,” he explained. “There, I would read to my little brother twice a week. I liked it so much that I sought out to become a teacher.

“I enjoy making meaningful connections with students and pushing them academically forward. My greatest joy is seeing them grapple and learn a concept … Through teaching, I found my life’s passion.”