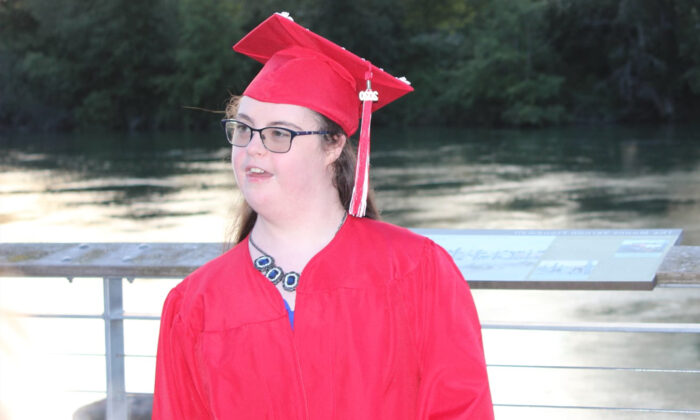 Girl With Down Syndrome, Autism, and Cerebral Palsy Graduates From College, Wins Award

Born prematurely with the odds stacked against her, this 22-year-old woman has since defied her diagnoses of Down syndrome, cerebral palsy, and autism.

While doctors had said she may never walk, talk, read, or write, over the years, she braved through to graduate high school, complete community college, and even win a coveted award.

“She thinks she’s a rock star all the time,” her mother, Joy Caldwell, told the Skagit Valley Herald.

Sharing her story on social media, Lonergan said when she was just a week old, her mother read a story about Karen Gaffney, a woman with Down syndrome who had attended community college and swam the English Channel.

“Karen’s story helped my mom to expect more and not limit my future,” she wrote.

Lonergan’s fortitude was tested from a young age. Throughout her childhood and teens, she underwent two brain surgeries and many complicated procedures to place a cumulative four rods and 28 screws in her back, reported KING5.

Yet she persevered through the pain, learning to walk at the age of 6, and enduring a back brace that limited her movement.

Lonergan thrived at school with the support of some amazing teachers and an Individualized Education Plan (IEP). She took part in the Special Olympics State Summer Games in 2015, winning gold and bronze medals for 25- and 50-meter guided walks.

Lonergan blossomed at college, joining the Campus Christian Fellowship and making many friends.

Owing to her success, Lonergan was nominated by the college’s board of trustees for a 2021 Transforming Lives Award in February, placing her among just 34 students representing the 34 community and technical colleges across Washington state, reported Skagit Valley Herald.

“We nominated her because she’s a walking, talking miracle,” Flora Perez-Lucatero, vice-chair of the Skagit Valley College Board of Trustees, told the outlet.

“We feel she truly is an inspiration and a light of hope for so many other students out there who want to attend college, but may feel it may not be for them.”

Since graduation, Lonergan has used the life skills gleaned from the INVEST program to demonstrate how college has enriched her life.

Through workshops, Lonergan helps students with developmental disabilities learn about the incredible support and numerous technologies that could help make a college career possible.

A confident young adult, Lonergan was chosen as an ambassador for the nonprofit Nothing Down in 2017. She has even taken a job as a restaurant hostess, which she loves.

Caldwell claims her daughter may not quite appreciate the gravity of her achievements, but Lonergan’s power to inspire is tangible. So is her power to make her mother proud.

“She is a miracle and a blessing and I wouldn’t have her any other way,” Caldwell posted on Facebook. “Good job, God!”