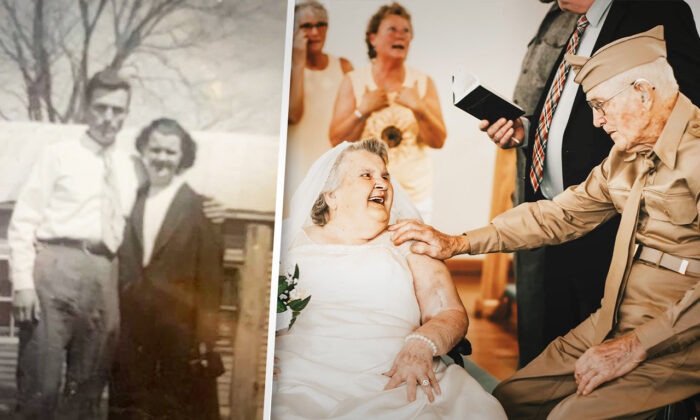 The family of a 95-year-old U.S. Army veteran and his wife have honored the happy couple on their 75th wedding anniversary by giving them the white wedding they never had.

Over the first weekend in October, Ulysses Dawson and his wife, Lorraine, 92, said “I do” for the second time. Five generations of their family attended.

Both born and raised in West Virginia, the retired truck driver and his wife, a former stay-at-home mom, first tied the knot in 1946, but never had a traditional wedding; Lorraine had worn a two-piece red suit, and Ulysses his Army uniform—the same uniform in which he met his then-bride-to-be.

“My oldest daughter, she’s the one that came up with the whole idea of a wedding because it was their 75th anniversary; 75 years is a big milestone to celebrate,” the couple’s daughter Judy Meadows, 62, told The Epoch Times. “We went crazy from there, with all of my children.”

After postponing the date from Aug. 23 to Oct. 2, so that Meadows’s oldest brother could be there to give his mother away, the plans fell into place. The ceremony was officiated by the Dawsons’ pastor, and Meadows’s niece bought a special dress for her aunt, the first white wedding gown Lorraine had ever worn.

Ulysses donned a remake of his original 1940s Army uniform. The day was “brilliant,” Meadows said.

Another of the couple’s daughters, Rita Poling, told Good Morning America that both she and her father were overcome with emotion as Lorraine came down the aisle. “All he could do was cry,” she said. “He cried mainly through the whole thing.”

The emotional groom told WCHS, “Our prayers were answered, and I thank God for it all. The knot was tied awful right and it’s still holding.”

Ulysses and Lorraine, said Meadows, have been there for each other, and for their children, through thick and thin.

“They have always tried to give us the best advice,” she told The Epoch Times. “They never treated anyone any different than the other; they have always been fair to each and every one.”

While hard times may have prompted disagreements—”Every couple has wobbles,” Meadows reminds—the Dawsons have always listened patiently to one another and work things out.

At the heart of their longevous relationship lies a deep love and affection for one another, even to this day.

“They have never, ever, ever been afraid to show affection to one another,” Meadows said. And while circumstances have changed—Lorraine requiring a wheelchair or walker to get around—they still enjoy their unchanged routine: a morning coffee, a kiss, and conversation.