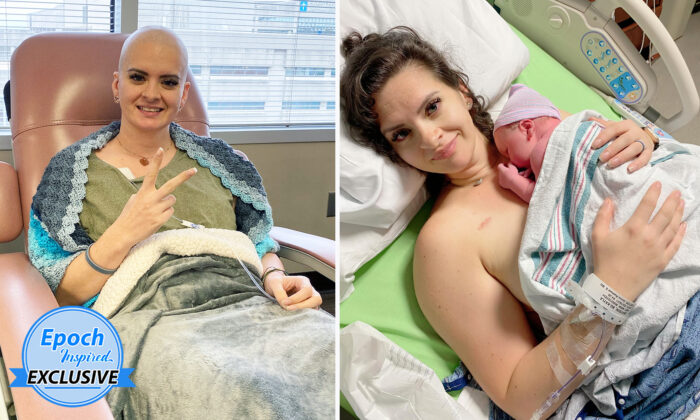 However, she was later told that she would never be able to conceive. Despite this, Kayla placed her faith in God, and in May 2021, she and Grayson welcomed their first healthy baby girl, Joella Mae.

“Joella means ‘the Lord is God,’ and ‘His will will be done,'” Grayson told The Epoch Times via email. “It was the perfect name for our little miracle!”

Grayson recalled a series of events after Kayla’s cancer diagnosis in October 2019 and shared the story in its entirety.

“When you hear the word ‘cancer,’ it doesn’t seem real,” Grayson said. “When we got home from the doctors, I didn’t really know what to do or say. I couldn’t sit still, so I started cleaning the entire house.”

Meanwhile, Kayla decided to call family and friends to break the news as soon as possible. “Obviously, there were tears,” said Grayson, “but we knew deep down that God was going to bring us through.”

Garnering immense strength and placing her faith in God, Kayla then forged ahead with chemotherapy in January 2020.

During this time, the couple were hit with a lot of back to back news. They were told that due to chemotherapy, Kalya’s chances of conceiving “were slim to none.”

“Kayla was crushed. She had dreamed all her life of being a mom, and she felt like her hopes and dreams had come crashing down,” Greyson told The Epoch Times.

Yet faith holds a central place in the Rogers’ lives. Thus, when she heard that conceiving naturally would be nearly impossible, she began publicly proclaiming that “God was going to do the impossible, that He would allow her to get pregnant naturally after cancer.”

On Mother’s Day, May 2020, a girl from their church showed up on the couple’s doorstep. The girl told Kayla that the Lord had sent her there with prophetic Mother’s Day flowers and that the following year she would be a mom.

A few months later, in September, Kayla had begun feeling unwell and it lasted for a few days. Then one night, the penny dropped when she witnessed an actress reeling off a list of symptoms on a TV show, and the doctor on the show confirmed that the actress was pregnant. This prompted Kayla to take a test, and three other subsequent tests in the couple’s bathroom confirmed the blissful truth.

“She then cried out to God in the bathroom, thanking Him before running upstairs to tell me,” Grayson recalled, admitting he was immobilized by shock before the joy set in.

Baby Joella was born on the morning of May 18, weighing 8 pounds 7 ounces. “Both mom and baby are doing well,” Grayson posted, sharing sweet photos on Facebook and congratulating his “rockstar” wife for enduring a six-hour natural labor.

Speaking to The Epoch Times, Grayson said seeing Joella for the first time was a “sea of emotions.” He continued, “looking at this beautiful, perfect baby in my arms and knowing that I had a part in creating her. She is absolutely perfect and such a blessing.”

Kayla had proven her fortitude numerous times before. As a chief petty officer in the Navy, she sat her qualification exam while recovering from a double mastectomy surgery, in between her first and second rounds of chemotherapy. She is now embracing her latest challenge—motherhood.

“It’s definitely an adjustment, but oh my gosh, it’s so worth it!” she said. “Every time [Joella] stares into my eyes, or most recently, smiles when I walk into the room near her, it’s literally the best feeling ever. I wouldn’t trade it for the world.”

Kayla, who runs the law firm Viles & Beckman LLC besides her role in the Navy, is taking extended maternity leave to spend time with her beautiful girl and happy family.

Joella is now approaching 2 months old. Both Kayla and Grayson attribute their miracle baby’s arrival to God’s will, faith, and prayer.

“Don’t give up hope,” Kayla said. “What the world says is nearly impossible is definitely possible with God at the center.”