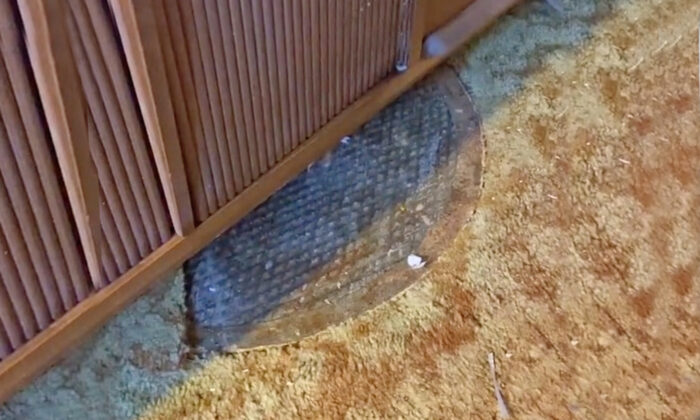 A California woman discovered a manhole in her bedroom leading to an abandoned bomb shelter beneath.

The underground shelter, and an adjoining food store, had seemingly been left undisturbed for decades.

Jennifer Little made the astounding discovery while she was moving a 400-pound piece of bedroom furniture.

She was too nervous to descend into the dark, musty shelter herself, for fear of spiders, so her husband ventured down first with a torch in hand.

Little filmed their first exploration of the secret shelter and shared the footage in a series of videos on TikTok. Social media users were immediately entranced.

In Little’s first video in this series, which garnered millions of views, her husband lowers himself into the murky manhole after brushing at the entrance with a duster to clear spiderwebs.

In another footage taken from inside the shelter, hooks protrude from the walls and the floor is shown littered with debris.

A man’s voice comments, “This is a legit bomb shelter!”

The underground explorers then discovered a dry food storage space next door.

“I’m not sure why they built it this way, you’d have to leave the shelter to go into the dry storage room,” Little said.

Little speculated that it would have been “pretty normal” for homes like hers, built in 1951, to include underground bomb shelters.

She originally assumed the bunker had been built for use during the Second World War, but later learned it would have been a shelter to protect against nuclear fallout during the Cold War period, which began in 1947.

“People were so afraid of a nuclear bomb happening on the California coast, especially central California because it’s so exposed,” she said.

Braving the nooks and crannies of the shelter, noting peeling walls and water damage, Little said even “after 50 years it was clearly not weather-tight.”

It remains unclear what Little’s plans are for the underground bunker, but social media users responded to her footage with a mixture of trepidation, awe, and suggestions of their own.