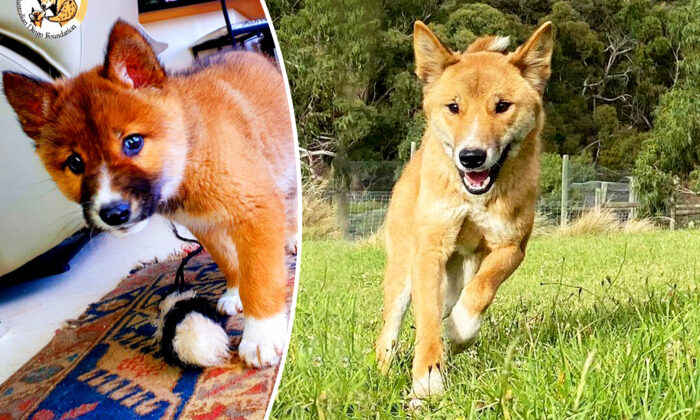 When an Aussie woman discovered a wounded pup in her backyard, she assumed he was a dog or a fox. After DNA testing, he turned out to be an endangered species of wild dingo. Two years on, the rehabilitated pup has become a crucial player in an ongoing breeding program.

The dingo pup was found in August 2019 when he dropped from the sky into resident Jayne Guiney’s backyard in the remote alpine town of Wandiligong, Australia.

“[Jayne] had awoken to howls of stress one winter morning and found the source as a wild-colored, furry little creature cowering under a tussock of grass,” Lyn Watson, director of the Australian Dingo Foundation, told The Epoch Times. “She took him indoors to warm and offer him food and water.”

Noticing his “bloodied paws and obvious discomfort,” Jayne took the weeks-old pup to see wildlife veterinarian Dr. Bec Day of Alpine Animal Hospital. Noticing talon piercings on the pup’s back, she guessed a bird of prey had tried to snatch him as a meal.

“At least this explained how he could simply appear in a fenced back garden,” said Lyn.

Dr. Day sent DNA samples to genetics researcher Dr. Kylie Cairns at the University of New South Wales. The pup, named Wandi after the town where he was found, headed 250 kilometers (155 miles) south to Lyn’s Dingo Discovery Sanctuary and Research Centre at the foothills of Victoria’s Macedon Ranges.

Owing to faulty equipment, it took months for Lyn and her team to receive confirmation of Wandi’s DNA that he was pure alpine dingo.

According to sanctuary manager Kevin Newman, 34, Australian dingoes are often seen as a threat to livestock and are subject to lethal control in many areas. But the average dingo, said Lyn, consumes only 350 to 500 grams of food per day, equivalent to “a couple of fat lizards or bush rats.”

“For many years, scientists and other stakeholders argued that there were no pure or true dingoes left in Victoria,” Kevin explained. “But Wandi’s DNA test proved otherwise. It was quite a shock to all of us to know that alpine dingoes, which are the most at-threat in the wild, are still living and surviving in the wild here.”

Kevin was tasked with publicizing Wandi’s story on Instagram; the page has amassed almost 60,000 followers to date.

“Meantime, [Wandi] has blossomed into a proud and handsome animal, very happily bonded with one of our captive bred females, Hermione,” said Lyn.

“He has an air of celebrity about him … in fact, his social media has inspired one artist to portray him as ‘Lord Wandi,’ and an original work graces our entrance hall.”

Wandi has even inspired a book. Published on Sept. 29, author Favel Parrett’s “Wandi” retells for kids the tale of the lucky pup who fell from the sky, with proceeds going to the Australian Dingo Foundation for dingo advocacy.

“You can see some photos of his cubs on his Instagram and watch them grow up with us,” Kevin told the newspaper. “This is an important part of the work that we do, because it ensures the survival of pure dingoes into the future.”

Lyn thinks of Wandi’s arrival as an answer to her prayers; in order to preserve the true dingo genetic pool, breeding efforts need “fresh, pure genetic material … our only chance of obtaining fresh blood [was] via a rescue situation,” she said.

Now almost 80, Lyn started Dingo Discovery Sanctuary with her late husband, Peter, after his retirement in 2002. As president of their state’s kennel club, Peter had had legal dingo ownership legislated through parliament 10 years prior, and the couple have owned dingoes ever since.

Their meadowland sanctuary plot is “a secluded slice of heaven,” said Lyn.

The pure alpine dingo is a species engendered entirely by nature without human intervention. Once revered by indigenous people, they were demonized and exterminated by European sheep graziers from the 18th century.

That extermination persists to the present day. Sharing a photo of hanging dingo carcasses, Lyn implored, “The world needs to be made aware … we cannot help but believe that some of these are Wandi’s relatives, as this scene is not too far from his origin.”

Since Wandi appeared on the scene, Dingo Discovery Sanctuary became home to four more pure dingo orphans, who may join him in the cause to save their relatives living wild in the Victorian bush.