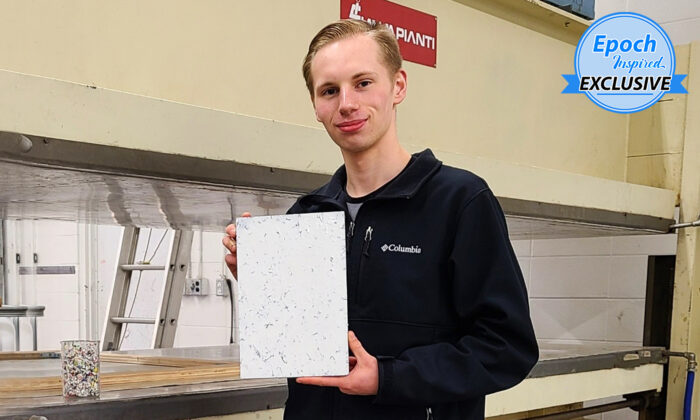 Teen Sets Up Company to Turn Waste Plastics Into Revolutionary Product: ‘Beyond Grateful’

An industrious Canadian teen has put his money where his mouth is when it comes to plastic waste.

Pooling savings from three jobs, he started a company that turns post-consumer plastics destined for landfill into affordable building materials—thereby, offering a revolutionary in-house solution to the pileup of waste plastic, filling “the role of Chinese recyclers” after China banned the import three years ago.

At 18, Myles Peterson of Castlegar, British Columbia, is CEO and founder of the Terracore Plastic Company. And the young innovator’s first product, a promising alternative to plywood, is already on the market.

In an interview with The Epoch Times, the young entrepreneur said, “Unlike companies that purchase recycled plastic instead of waste plastic, we are able to take advantage of the ban to ensure not only a lower price for our customers but to make sure that no plastic goes to waste.”

The teenage CEO, who works almost 11 hours a day in his factory, credited smart decisions, hard work, perseverance, a little luck, and—most importantly—the support of his father and grandmother as instrumental to his success. Peterson, who loves cooking, music, and watching “Star Wars” movies in his little free time, said he also managed the time to recently finish a course in psychology at the University of Alberta.

Peterson says it all began when he went on a trip to India to attend his boss’s wedding. He correlated the smog he saw in India to the burning of trash plastic. In discovering that inhaling microplastics can cause severe neurological problems, the teen felt compelled to do something.

“I decided to start a company to fix the underlying issues, provide decent jobs, and ensure that plastic gets recycled properly,” he said.

“The best way to use this plastic is to keep it out of the environment by keeping it in use, and I thought that the best way to do that is to put it into building materials.

“It took me months of working very long days to come up with a composition of various components, primarily plastic with some wood, alongside other materials, that was strong enough to compete with plywood.”

Recalling how he grew up without much money, Peterson said his life was not easy, but he’s “beyond grateful” to his father and grandmother’s support.

“At one point, after my parent’s divorce, my dad and I lived in an unfinished trailer where we used an old stepladder to get through the door,” he said. “There was one running sink connected to our neighbor’s well; we couldn’t afford anything else.

“These circumstances fueled my desire to become successful, and hopefully help others like me along the way.”

After his father became unable to work due to a misdiagnosed illness, Peterson took his first job at McDonald’s and was promoted to be the department head. Jobs at Humble Bean and Waf-Pho followed, both during and after high school.

With savings and a solid ambition, Peterson left his hometown and moved to Camrose, Alberta, in late January to start his business. Very quickly, long working hours became his norm.

Peterson’s first product, the Terra-Panel, is a waterproof, weatherproof, UV-resistant, and plastic-composite panel capable of outperforming plywood. To make them, raw plastic waste is shredded, washed, dried, mixed with wood chips and additives, melted, and pressed in a 90-ton press.

The finished panel—which costs about 30 percent less than plywood—can be cut, screwed, and nailed just like regular plywood, but can withstand freezing temperatures and be left outdoors without fracturing.

“It’s the only thing on the market that combines cost-effectiveness, weather resistance, and strength,” he said.

The global plastic waste crisis is a persistent issue, and the ever-evolving trade laws are changing the landscape.

In January 2018, the Chinese Communist Party (CCP) banned the import of 24 grades of solid waste, including post-consumer plastics, placing a huge and immediate strain on other countries’ own waste management and recycling capabilities.

Yet Peterson, with his innovative vision, sees light at the end of the tunnel.

“By doing end-to-end recycling in-house, Terracore fills the role of the Chinese recyclers,” he said. “We purchase bales of unsorted waste plastic from a municipal facility [Centra-Cam, Camrose] which is very economical, and process it to end up with cleaned, separated, ready-to-use plastic.

“Companies around the globe that are ready and willing to innovate are not only able to benefit from the ban financially, but can do good to the environment by increasing the percentage of plastic that is actually turned into new products”

Peterson is now selling Terra-Panels from his company’s storefront and welcoming inquiries from investors. Terracore is in talks with multiple construction companies about using the panels in homebuilding projects, “all of which look very promising at the moment,” he said.

In advising others to take risks for their dreams, he said, “Pick a goal, make a plan, and work as hard as you can to achieve your goal.”

“Putting in hard work to try to reach the next goal is, was, and will continue to be the number one most important thing contributing to everything I do,” he said.