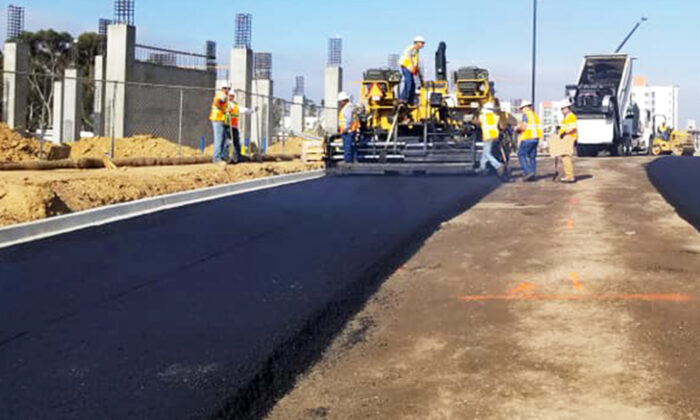 The facts on plastic pollution just keep getting more dire. A 2016 MacArthur Foundation report found that “only 14 percent of plastic packaging is collected for recycling” out of the billions of tons produced every year.

Now, Scottish engineer Toby McCartney is doing his part to put a dent in that environmental impact with his unique invention. His company, called MacRebur, uses waste plastic to literally pave the roads—creating what he calls the world’s first “plastic roads.”

Dedicated to addressing “the poor quality of roads that we drive on and the waste plastic epidemic that we all see in the world today,” as explained in a promotional video, McCartney has seen his recycled plastic pavement alternative expand from the United Kingdom to countries all over the world.

McCartney has talked about three different sources of inspiration for his project; one was the abominable quality of the road outside his house in Lockerbie, Scotland, “which was full of potholes,” as he explains on his company’s website.

The other was a trip to India, which as a booming, developing nation has considerable infrastructure challenges.

Working with a charity in the south parts of the country, McCartney focused on helping landfill pickers identify and resell potentially useful items that were being discarded.

In so doing, he “noticed that some of the waste plastics retrieved by the pickers was put into potholes and set alight until it melted to form a makeshift plastic pothole filler,” their website explained. This spurred him to further engineer a process to pave roads in the United Kingdom.

The impetus for the project came from McCartney’s young daughter, as he told the BBC. When her teacher asked her what lives in the world’s oceans, she responded, “Plastics, Miss.” He felt that he should make it part of his mission, as a father, to not allow her to grow up in a world where this is the case.

“We take the polymers, the plastics that you and I throw away every single day—the bottles, the bags, the nappies—we then pelletize them,” McCartney told CNN.

Typical roads are made out of several different materials, including rocks, gravel, and limestone; however, MacRebur roads replace some of the least environmentally friendly component, bitumen, and replaces it with a combination of plastic pellets to be sold to asphalt manufacturers.

Another advantage is that his company’s plastic pellets, when combined with asphalt, help it last longer, forming a stronger seal, just like a kind of superglue, he adds.

At first, there was skepticism on the part of government that pays for road maintenance, and it took some time to convince authorities in the United Kingdom and asphalt manufacturers that what had been produced actually works. After testing, the product was found to be “60 percent stronger” than previous asphalt products.

The company is trying out the product in other places such as the United States, Canada, Bahrain, and Saudi Arabia. They are also partnering with corporations, neighborhood associations, and even private homeowners to provide a variety of solutions for all sorts of paving projects.