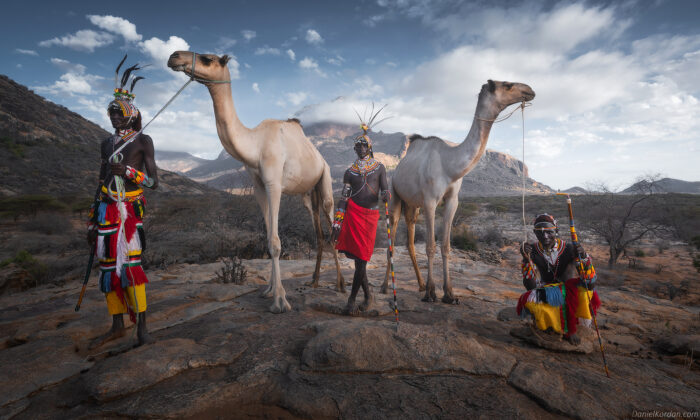 With a camera and tripod in hand and the ambition of sharing more about remote cultures with the world, a Russian photographer has produced a series of breathtaking portraits of Kenyan tribes hiking across rugged, mountainous landscapes.

Daniel Kordan, who lives in Tuscany, traveled to Kenya’s Samburu County and Maasai Mara, a large national game reserve in Narok, to photograph its indigenous tribes. Hiking with them, said Kordan, “you learn to listen to nature.”

“I started this series about nomads and indigenous tribes while traveling in Mongolia,” Kordan explained on Instagram. “To make these photos I went on a hiking trip, first with Maasai and then with Samburu people in the north of Kenya. It was quite a challenging trip.”

He divided his journey into three parts. The first part of his incredible photo series depicts interactions with the Samburu people.

It’s one thing to watch abundant African wildlife from a vehicle on safari, said Kordan, but it’s something entirely different to “immerse yourself in the very heart of it.” In spending time with indigenous tribes, he learned to read warning signs; “My guide could easily recognize animals just by the look of a slightly broken tree branch,” he explained.

The Maasai, Kordan recalled, were not afraid to meet lions. They simply crouched on their knees, looked into the lion’s eyes, and watched the big cat walk away.

Kordan reached epic lookout points with the Samburu people, having his clothes being torn apart by unforgiving thorn bushes along the way. He was even surprised by a hyena leaping out at him from behind a bush. However, Kordan’s hiking guide scared it away with an imitation lion’s roar.

The second series of the photographer’s Kenya trip depicts meeting the Maasai.

“Although millions of tourists come to see national parks in Kenya to enjoy wildlife, many forget that there’s a wonderful culture of Maasai ‘next door,'” he wrote. “I hope that people will pay attention to preserve and value their traditions as well!”

Behind the big smiles and open hearts of the Maasai, said Kordan, lies a formidable knowledge of the nature surrounding them. Photos from this leg of the trip highlight the hikers’ powerful stances, shields and weaponry, and emblematic red clothing.

In an interview with Photography Talk, Kordan explained that he uses Luminar 3 to process most of his images, and Curves, Channels, and HSL for color corrections: “simple to use” tools that can have a tremendous impact on how his landscapes turn out.

The third leg of the photographer’s trip was an art project, curated by Lumas galleries, depicting the beauty of the Maasai culture and people. “The storm is coming,” Kordan wrote. “Who knows what will happen in the next few years with local cultures.”

He and his hiking guides waited a few days before setting off this time, hoping for stormy weather, the heavy gray clouds and turbulent skies serving as a metaphor for the potential fate of indigenous cultures.

Kordan described the Kenya trip in its entirety as “a lifetime experience.” A selection of his photos is displayed in large print at Lumas galleries around the world, in hope that the “vanishing, unique culture of these beautiful people” will be valued and preserved for generations.

Kordan’s fascination for photography was inspired by the picturesque lake region near Moscow where he grew up. To this day, nature and human companionship are his biggest inspirations.

“Photography has taught me to be really, really patient,” he explained. “There are times when you just need to sit down and enjoy the current moment, too. It’s not always about getting the perfect shot. Taking time to actually see what’s around you and appreciate its beauty is a necessity for sure.”

Past projects of Kordan’s include a trip to Mongolia to meet the country’s last remaining nomadic eagle keepers, and a trip to photograph the dragon blood trees and white sand dunes of Socotra, a remote island off the east coast of Africa and Yemen.