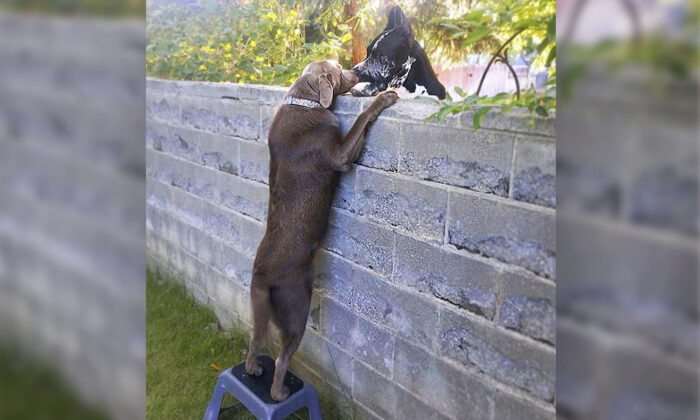 The internet is melting over a Labrador and two great Danes who made friends over the fence between their backyards with the help of a stepping stool provided by the Lab’s owner.

Six months ago, the chocolate Lab, Giuseppe, and his owner, Robert Carnes, moved in next door to a pair of great Danes, Vito and Bambino. The larger dogs could see over the wall into his yard by propping up on their lengthy hind legs, but Giuseppe was too short to see the other dogs.

Immediately, Vito and Bambino were interested in the new neighbor and peeped over the fence to greet him.

Giuseppe tried valiantly to reach the top of the wall and greet his new neighbors, but he wasn’t quite tall enough.

“He has tried many times to jump up and get a good whiff of his big doggy friends whenever we’re all outside,” said Vito and Bambino’s owner, Afton Tarin.

“Giuseppe would furiously jump as high as he could and try to say hello,” said Carnes. “I would always say, ‘If you only had a step stool.’”

That was when Carnes realized he did have a step stool somewhere, and had one of his kids go grab it for the chocolate Lab. And it worked brilliantly.

With the extra boost, Giuseppe was suddenly nose to nose with his new neighbors.

Carnes sent a photo of the greeting to Tarin.

“My initial reaction was to bust up laughing,” she said. “Seeing his little feet fully extended and his tail all blurred out from wagging too fast, I couldn’t help it. So stinkin’ cute. It definitely gives you that feel-good feeling.”

Their meeting over the wall inspired their owners to introduce the dogs to each other up close, and they’ve even begun taking walks together.

Train said, “The boys really enjoy each other. It’s super nice having that sort of relationship with our next-door neighbors.”