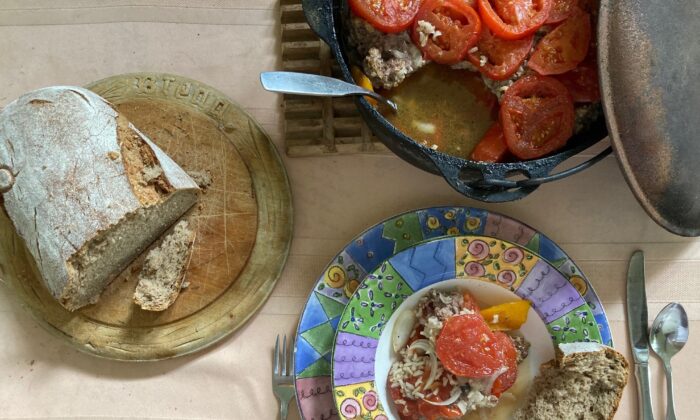 Sacumpach was a delicious way to use up an abundance of summer vegetables in the garden before the end of the season. (Courtesy of E. M. McCreight)
Recipes

Readers share their treasured recipes
By The Family Table

Every September, when the garden overflowed with tomatoes and green peppers, my German-born grandmother would gather the family, including us seven grandchildren, for a dinner of homemade “sacumpach.” We kids picked out the best parts of the casserole (does anyone like green peppers as a kid?) and enjoyed the meat and rice.

It wasn’t until many years later, when we grandkids were in our own homes, that the delicious flavors and glorious bounty of either our own gardens or the farmers market produce nudged us to reproduce that now-delicious casserole. If fall is in the air, it’s time to gather the veggies for sacumpach! (Though no one uses green peppers anymore.)

We’re not sure if it was an invented recipe, as nothing went to waste on our grandparents’ small gentleman’s garden property in Bucks County, Pennsylvania. Susan, grandchild No. 7, is the linguist of the grandkid group and thinks the name is dialectal, as she couldn’t find anything in her search for the dish or in Grandmom’s recipe book. It’s quite possible, as the German we learned from our grandparents has lost a lot in our Americanized translations.

Our grandparents emigrated from the Austro-Hungarian Empire around the early 1900s, and joined family and friends in eking out a living as a housekeeper and a machinist in Philadelphia. They were poor, but they always had enough food on the table due in part to great frugality and hard work, and a prolific vegetable garden in the backyard. My mother learned the art of canning, darning old socks, and making underwear from old flour sacks. (True to form, for Christmas one year, Mom made us all tea towels from old flour sacks. At least we didn’t have to wear the sack underwear!) The motto for their home was the adage: “Use it up. Wear it out. Make it do. Or do without.”

After they retired, my grandparents built a small brick house in the suburbs surrounded by other retired German families. Everyone had a garden. My grandparents also raised honeybees and had chickens roaming around. It was a great delight for us kids to see the headless chickens run around the yard after being relieved of their heads by our ax-wielding grandfather. The honey that they sold paid for their property taxes. A win-win for all (except those of us who had to help extract the honey).

Suffice it to say, eating sacumpach, that layered bounty of color and texture, brings back many great memories—memories not only of great German cooking, but of a culture and time when people worked together to succeed in a newly adopted country.

That tinge of autumn in the air? Sacumpach time! As this is primarily a peasant meal, feel free to alter the recipe to suit whatever extras you have from your garden. Leftovers taste better the next day!

Parboil the rice: Rinse the brown rice. Place in a microwave-safe container, add 3 cups water, and microwave for 6 minutes, until the water is boiling. Let sit to absorb the water.

Prepare the panade: Soak the bread in the milk until the bread has absorbed the milk. (Grandmom didn’t know panade from beans, but she knew it made the meat softer.)

Prepare the meat: Mix the ground beef with the 1 cup chopped onions and panade. Season with salt and pepper.

Assemble the casserole: Preheat the oven to 350 degrees F. Spray or coat with olive oil a Dutch oven or large oven-proof casserole dish.

Place a layer of sliced tomatoes in the bottom of the dish. Follow by sprinkling half of the sliced onions and peppers on top. Salt and pepper to taste. Layer on half of the parboiled rice, then half of the meat mixture, spreading to cover completely.

Repeat with another layer of tomatoes, onions and peppers, rice, and meat.

Top with a final layer of tomatoes, to cover the entire casserole. Pour 1/2 cup hot water over the top of the tomatoes. Cover and bake for 1 hour.

Serve with German sourdough bread, to sop up the juices. (“Not half bad,” says my English husband, who isn’t usually a fan of German cuisine.)

Send your recipe and comments, along with your full name, state, and contact information, to home@epochtimes.com, or mail it to: Home, The Epoch Times, 5 Penn Plaza, 8th Fl., New York, NY 10001.