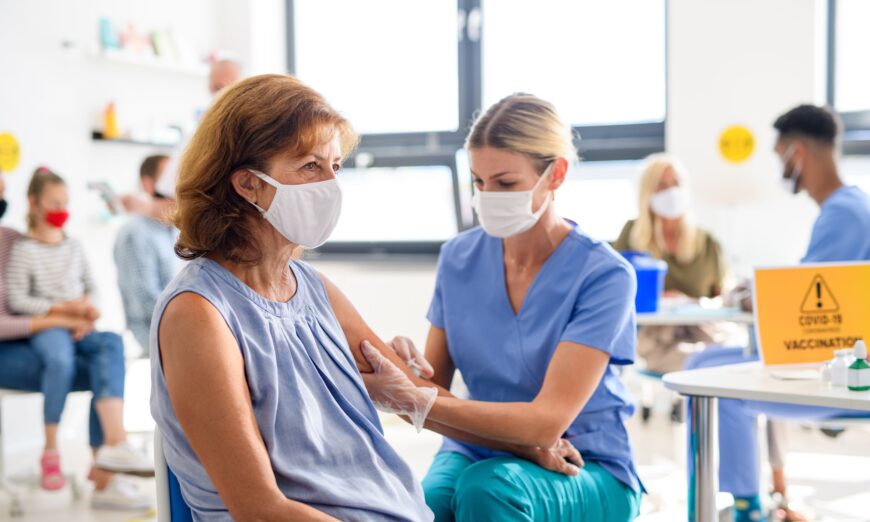 Studies suggest that vaccines may lead to neurological issues in the brain. (Halfpoint/Shutterstock)

Vaccines can in some cases trigger more serious illness when exposed to an unrelated virus, via a process known as virus interference.

A question that has lingered since the 2009 mass vaccination campaign against pandemic H1N1 swine flu is whether seasonal influenza vaccination might make pandemic infections worse or more prevalent. That concern has come into sharp focus as studies raise questions about vaccine rollouts for COVID-19 and research points to the potential of problematic viral interference.

This kind can be a boost to our fight against invading pathogens. Normal viral interference occurs when a prior viral infection offers neighboring cells a kind of protection. In a way, the original invader blocks the subsequent viral invaders from taking hold.

A study published in March in the Journal of Infectious Diseases reveals one example. Researchers with the University of Glasgow Center for Virus Research and Imperial College London found that the common cold might offer some protection against SARS-CoV-2, the virus that causes COVID-19.

“Human rhinoviruses cause the common cold and are the most prevalent respiratory viruses of humans,” notes the study abstract.

“We show that human rhinovirus triggers an interferon response that blocks SARS-CoV-2 replication. Mathematical simulations show that this virus–virus interaction is likely to have a population-wide effect as an increasing prevalence of rhinovirus will reduce the number of new COVID-19 cases.”

Unfortunately, research has found that vaccines may produce a counterproductive type of viral interference that makes people more, rather than less susceptible to viruses besides the one they are being vaccinated against.

A 2010 review in PLOS Medicine, led by Dr. Danuta Skowronski, a Canadian influenza expert with the Centre for Disease Control in British Columbia, found the seasonal flu vaccine increased people’s risk of getting sick with pandemic H1N1 swine flu and resulted in more serious bouts of illness.

People who received the trivalent influenza vaccine during the 2008-2009 flu season were between 1.4 and 2.5 times more likely to get infected with pandemic H1N1 in the spring and summer of 2009 than those who didn’t get the seasonal flu vaccine.

To double-check the findings, Skowronski and other researchers conducted a follow-up study on ferrets. Their findings were presented at the 2012 Interscience Conference on Antimicrobial Agents and Chemotherapy. At the time, Skowronski commented on her team’s findings, telling MedPage Today:

“There may be a direct vaccine effect in which the seasonal vaccine induced some cross-reactive antibodies that recognized pandemic H1N1 virus, but those antibodies were at low levels and were not effective at neutralizing the virus. Instead of killing the new virus it actually may facilitate its entry into the cells.”

In all, five observational studies conducted across several Canadian provinces found identical results. These findings also confirmed preliminary data from Canada and Hong Kong. Australian infectious disease expert Peter Collignon warned of the problems associated with this in an interview with Australia’s ABC News in 2011. “Some interesting data has become available which suggests that if you get immunized with the seasonal vaccine, you get less broad protection than if you get a natural infection.”

“We may be perversely setting ourselves up that if something really new and nasty comes along, that people who have been vaccinated may in fact be more susceptible compared to getting this natural infection.”

When it comes to COVID-19, Collignon’s warning may have been particularly relevant.

A study published in the Jan. 10, 2020, issue of the journal Vaccine found people were more likely to get some form of coronavirus infection if they had been vaccinated against influenza.

The study, titled “Influenza Vaccination and Respiratory Virus Interference Among Department of Defense Personnel During the 2017-2018 Influenza Season,” noted:

While seasonal influenza vaccination didn’t raise the risk of all respiratory infections, it was in fact “significantly associated with unspecified coronavirus” and human metapneumovirus (hMPV10).

“Unspecified” means that the virus was of the coronavirus family but not a specific type of coronavirus, like SARS-CoV-2, which was still unknown at the time this study was conducted.

Remember, SARS-CoV-2 is 1 of 7 different coronaviruses known to cause respiratory illness in humans. Four of them—229E, NL63, OC43, and HKU1—cause symptoms associated with the common cold.

OC43 and HKU1 are also known to cause bronchitis, acute exacerbation of chronic obstructive pulmonary disease, and pneumonia in all age groups, notes a 2013 study published in The Journal of Infectious Diseases. The other three human coronaviruses—which are capable of causing more serious respiratory illness—are SARS-CoV, MERS-CoV, and SARS-CoV-2.

On Oct. 1, 2020, professor Christian Wehenkel, an academic editor for PeerJ, published a data analysis in that same journal, in which he reports finding a “positive association between COVID-19 deaths and influenza vaccination rates in elderly people worldwide.”

In other words, areas with the highest vaccination rates among elderly people also had the highest COVID-19 death rates. To be fair, the publisher’s note points out that correlation doesn’t equal causation:

“What does that mean? By way of example, in some cities increased ice cream sales correlate with increased murder rates. But that doesn’t mean that if more ice creams are sold, then murder rates will increase. There is some other factor at play—the weather temperature.

“Similarly, this article should not be taken to suggest that receiving the influenza vaccination results in an increased risk of death for an individual with COVID-19 as there may be many confounding factors at play (including, for example, socioeconomic factors).”

That said, one of the reasons for the analysis was to double-check whether the data would support reports claiming that seasonal influenza vaccination was correlated with lower COVID-19 mortality—including one that found regions in Italy with higher vaccination rates among elders had lower COVID-19 death rates.

“A negative association was expected,” Wehenkel writes in PeerJ.

But that’s not what he found:

“Contrary to expectations, the present worldwide analysis and European sub-analysis do not support the previously reported negative association between COVID-19 deaths (DPMI) [COVID-19 deaths per million inhabitants] and IVR [influenza vaccination rate] in elderly people, observed in studies in Brazil and Italy,” the author noted.

The study looked at data sets from 39 countries with more than a half-million inhabitants and used a sophisticated ranking to mitigate the effects of confounding variables, including geographical and socioeconomic variables as well as variables related to non-pharmaceutical intervention.

“The results showed a positive association between COVID-19 deaths and IVR of people ≥65 years-old. There is a significant increase in COVID-19 deaths from eastern to western regions in the world. Further exploration is needed to explain these findings, and additional work on this line of research may lead to prevention of deaths associated with COVID-19.”

In the discussion section of the paper, Wehenkel points out that previous explanations for how flu vaccination might reduce COVID-19 deaths aren’t supported by the data he collected.

For example, he cites research attributing the beneficial effect of flu vaccination to improved prevention of influenza and SARS-CoV-2 coinfections, and another that suggested the flu vaccine might improve SARS-CoV-2 clearance.

These arguments “cannot explain the positive, direct or indirect relationship between influenza vaccination rates and both COVID-19 deaths per million inhabitants and case fatality ratio found in this study, which was confirmed by an unbiased ranking variable importance using Random Forest models,” Wehenkel says. Random Forest refers to a preferred classification algorithm used in data science to model predictions.

Instead, he offers the following hypotheses: “The influenza vaccine may increase influenza immunity at the expense of reduced immunity to SARS-CoV-2 by some unknown biological mechanism, as suggested by Cowling et al. (2012) for non-influenza respiratory virus.

“Alternatively, weaker temporary, non-specific immunity after influenza viral infection could cause this positive association due to stimulation of the innate immune response during and for a short time after infection.

“People who had received the influenza vaccination would have been protected against influenza but not against other viral infections, due to reduced non-specific immunity in the following weeks, probably caused by virus interference.”

Since Wehenkel’s analysis focuses on the flu vaccine’s impact on COVID-19 mortality among the elderly, it can be useful to take a look at information presented at a World Health Organization workshop in 2012. On page 6 of the workshop presentation in question, the presenter discusses “a paradox from trends studies” showing that “influenza-related mortality increased in U.S. elderly while vaccine coverage rose from 15 percent to 65 percent.”

On page 7, he further notes that while a decline in mortality of 35 percent would be expected with that increase in vaccine uptake, assuming the vaccine is 60 percent to 70 percent effective, the mortality rate has risen instead, although not exactly in tandem with vaccination coverage.

Seeing how the elderly are the most likely to die due to influenza, and the flu accounts for 5 percent to 10 percent of all winter deaths, a “50 percent mortality savings [is] just not possible,” the presenter states. He then highlights studies showing evidence of bias in studies that estimate influenza vaccine effectiveness in the elderly. When that bias is adjusted for, vaccine effectiveness among seniors is discouraging.

Interestingly, the document points out that immunologists have long known that vaccine effectiveness in the elderly would be low, thanks to senescent immune response, i.e., the natural decline in immune function that occurs with age. This is why influenza “remains a significant problem in elderly despite widespread influenza vaccination programs,” the presenter notes.

Joseph Mercola
Follow
Dr. Joseph Mercola is the founder of Mercola.com. An osteopathic physician, best-selling author, and recipient of multiple awards in the field of natural health, his primary vision is to change the modern health paradigm by providing people with a valuable resource to help them take control of their health.
SHARE
Friends Read FreeCopyFacebookTweet
SHARE
Friends Read FreeCopyFacebookTweet
You May Also Like