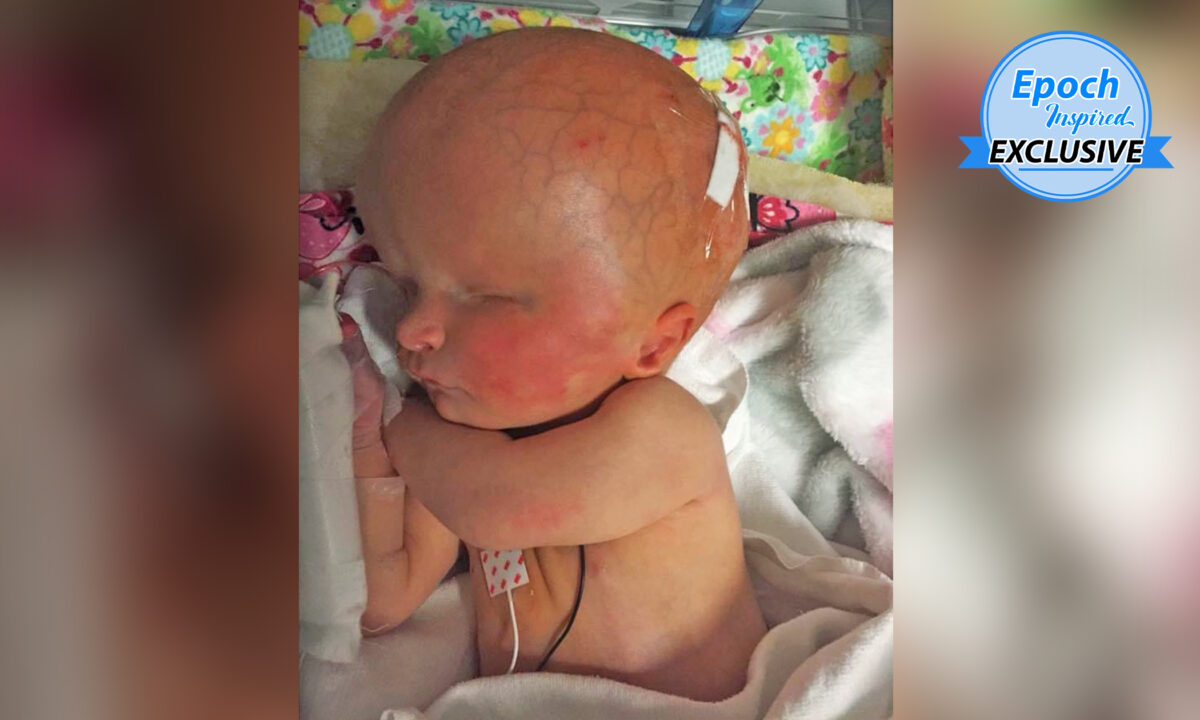 Upon hearing that their unborn baby daughter had enlarged ventricles in her skull and was missing two-thirds of her brain, parents Lorraine and Brian Bartholomew refused an abortion, firmly believing that God was in charge of their daughter’s destiny. Their little child, who was given a 1 percent chance of being born alive, defied the odds and now almost three years later is a living miracle.

Native Arizonian and stay-at-home mom Lorraine, and her auto technician husband, Brian, from California, made their home together in Tucson, Arizona. Both 38, the couple have six children, ranging in age from 9 months to 20 years old.

When Lorraine was five months pregnant with Eleanor, the couple learned their baby girl was missing two-thirds of her brain matter. “We asked the doctors if there was any chance her brain could grow more but were told confidently that the ‘die was already cast,’” Lorraine told The Epoch Times via email.

“They were so sure she would die that they had us set up with a special grieving program at the hospital,” Lorraine recalled. “They even recorded her heartbeat in utero for us, and put it in a teddy bear for us to keep as a memento!”

Describing the prospect of abortion as “unthinkable,” Lorraine and Brian declined.

While an ultrasound confirmed that Eleanor’s vital organs were functioning normally, her brain malformation was severe. At 33 weeks, a fetal MRI added new insight: She also had no eyeballs or optic nerves. Doctors even gave Eleanor a 1 percent chance of being born alive.

“We already loved her and had been praying for great things for her life,” said Lorraine. “We felt so completely hopeless.” However, she and her husband, both Christians, found strength in prayer.

Eleanor came into the world on April 13, 2018, and was delivered via cesarean section at 37 weeks due to the fluid enlarging her head. For the couple, seeing Eleanor for the first time was one of the scariest moments of their lives, according to the mom of six.

“We suddenly saw this little baby being carried to a little table, who was not moving, had a very large head, no eyes, and had yet to take her first breath,” Lorraine remembered. When Eleanor finally gasped for air, the couple rejoiced and cried.

“Honestly, even though her head was so shockingly large, my first thoughts were just about how beautiful she was,” Lorraine recalled upon seeing her daughter for the first time. “I was so grateful that she was alive and I could hold her in my arms.”

Eleanor, who had heard Brian’s voice while she was in the womb, even acknowledged her father in the NICU by turning her head.

Eleanor had received four official diagnoses after her birth, all of them rare, and none of them related.

Her main diagnosis before and during the birth was holoprosencephaly, a rare malformation affecting 1 in 16,000 babies born alive (most with the condition don’t survive), in which the brain fails to divide into two hemispheres.

She had hydrocephalus, or “water on the brain,” a condition affecting 1 in 1,000, and will have a brain shunt for the rest of her life to drain the extra fluid.

Her final diagnosis, bilateral anophthalmia, affects 1 in 100,000, which means Eleanor has eye sockets but was born with no eyeballs. Also missing her optic nerves, she has zero light perception.

Yet by the time she was 4 months old, Eleanor had already overcome one major prognosis: Her brain matter had grown substantially, a miracle for which, said her mother, there is no medical explanation.

Today, Eleanor is 2 1/2 years old and is “doing great.” Lorraine and Brian maintain a website, Faith For Eleanor, to share updates on their daughter’s remarkable progress.

“They expected her to have seizures because of her brain abnormalities, but she’s never had one,” Lorraine told The Epoch Times. “She is super happy and joyful. She loves playing with her siblings, listening to music, and swimming in the pool with her floatie.”

Brian, a musician in a band named Brian Justice Music, delights his daughter with his original songs.

“[Eleanor] cannot walk yet, but she can stand strong. She has a cane that she is learning to hold,” Lorraine shared, referring to her daughter’s progress. “She will learn braille … Mommy and Daddy are learning braille. She eats by mouth and breathes on her own! She is very healthy.”

Lorraine adores watching her daughter learn new things, feel with her hands—”which to her are her ‘eyes’”—and communicate by using signs. The toddler even challenges her parents by inventing new signs that Lorraine and Brian are compelled to figure out.

The biggest trials, said Lorraine, have been Eleanor’s medical procedures. “It is the worst thing to have to watch your child go through a painful procedure or surgery and not be able to take the pain away,” she explained. “And in her case, the fact that she can’t see anything makes it worse.”

Through trials and triumphs, Eleanor’s parents couldn’t be prouder of their daughter. “She explores and tries so very hard at everything she does,” said Lorraine. “She has a very stubborn streak—no wonder with that red hair—that can be challenging, but also is going to help her go far!”

For other parents of children with special needs, Lorraine advocates trusting God and having the courage to question doctors. She encourages the rest of the world to engage without fear, to help people with special needs feel accepted and included.

“Instead of, ‘Don’t stare,’ teach [children] to say, ‘Hello!’” she recommended. “And questions are okay! We’ve never been offended by someone asking about Eleanor.

“God knows what He’s doing when He makes these children,” Lorraine reflected. “There’s nobody like our Eleanor!”