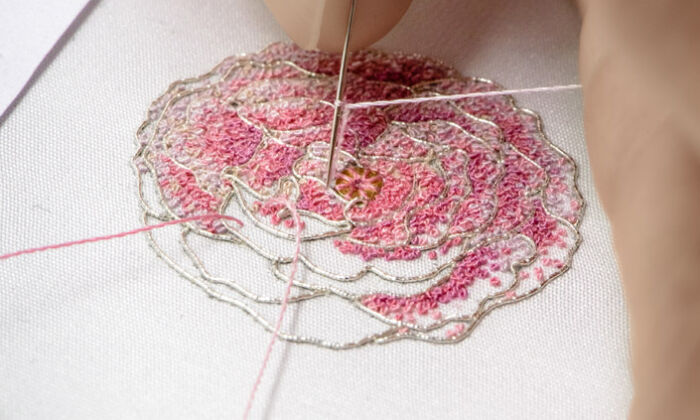 The gold thread used for this rose, for a Piaget watch face, was hair-thin and had to be handled with extreme care. (Piaget/Courtesy of Le Bégonia d'Or )
Fine Arts & Craftsmanship

For the past 26 years, gold-thread embroiderer Sylvie Deschamps has headed Le Bégonia d’Or, a gold-embroidery workshop in the historic town of Rochefort, just south of La Rochelle in the west of France.

The town dates back to the 11th century, when Rochefort Castle was built to prevent a Norman attack. But the modern fortified town of Rochefort was established in the late 17th century, when the Sun King Louis XIV’s minister, Jean-Baptiste Colbert, founded an arsenal and military port there. To embellish the men’s military attire, gold-embroidery workshops were established in the town.

Deschamps continues the town’s gold-embroidery tradition. She holds the prestigious title of Master Artist, an honor bestowed by the French Ministry of Culture and Communication to fine craftspeople who are recognized by their peers as virtuoso artists, and who are capable of passing on the embroidery heritage to future generations.

There are only 89 master artists in France, and Deschamps is currently the only gold-thread embroiderer with the title. Recalling the day she received the honor in 2010, Deschamps said in a telephone interview, “It was one of the most memorable days of my life.”

The Master Artist title brought Deschamps and Le Bégonia d’Or much media attention, and many illustrious commissions from luxury companies such as the fashion houses of Hermès, Cartier, and Valentino; the perfumer Guerlain; the Swiss watchmaker Piaget; and the shoemaker John Lobb.

Besides the luxury brands, the Le Bégonia d’Or atelier also undertakes commissions to design and create unique embellishments for interiors of private jets, yachts, and homes. In addition, Deschamps and her team restore and repair gold embroidery on many items, from ecclesiastical banners to customers’ couches.

An important part of the atelier is ensuring that the tradition of gold-thread embroidery is taught to future generations. Deschamps’s apprentice, Marlène Rouhaud works alongside her, and the atelier runs classes throughout the year for different skill levels.

As a teenager, Deschamps once set her heart on becoming a lingerie maker, as she loved different types of delicate lace. Her love for lace remains, but her professional lingerie-making hopes were dashed when she was 15 years old. A lack of students interested in learning to make lingerie meant the course she wanted to take didn’t run that year.

The school also specialized in gold-thread embroidery, and when Deschamps saw some of the finished pieces, she knew that was what she wanted to study.

“The gold thread chose me, rather than me choosing the material,” she said.

For six years, Deschamps learned from the best embroiderer in Lyon, Lucie Teston, at Bouvard & Duviard. Under Teston’s strict tutelage, she perfected her embroidery skills, learning all kinds of embroidery techniques—some of which date back to the 15th century.

Meticulously Made in France

All the materials used in the atelier are made in France. And the gold thread itself is made by the historic gold-thread maker in the country, Ets Carlhian.

Gold thread differs from normal embroidery threads such as silk. Gold thread consists of a little spring of gold which is cut to size and then strung on a thread, like stringing pearls. The precious metal thread isn’t as supple as normal thread, and it requires delicate, expert handling since it can easily be damaged, Deschamps explained.

“When you touch gold thread, it’s smooth and cold … and it’s wonderful to handle and have between your fingers,” she said.

In 2013, the French cosmetic company Guerlain celebrated the 160th anniversary of its iconic perfume L’Eau Impériale. The company organized a competition for master artists to create a limited-edition embellished perfume bottle or its packaging. Nine designs were selected.

One of those selected was Le Bégonia d’Or’s entry. Deschamps along with Rouhaud took 135 hours to embroider the bottle, which is on display in Guerlain’s boutique on the Champs-Élysées in Paris.

Evelyn Combeau acted as translator from French to English.