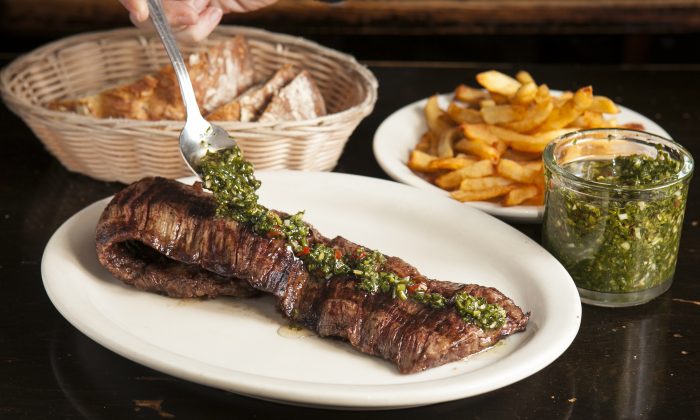 At Buenos Aires, Beef Is King

For meat-lovers, this authentic Argentine spot on the Lower East Side, might be the sort of down-home place you dream of—good value, friendly staff, but above all, satisfying, bliss-inducing beef.

You’ll find little elbowroom at Buenos Aires, the place is packed every night. During the last eight years it hasn’t exactly gone under the radar, earning regulars among a diverse crowd, including Argentines and a fair share of diplomats and public figures.

It’s homey and rustic in a way, but the vibe is also lively, aided by riffs of tango-inspired electronica. On the exposed brick walls, you’ll find black-and-white photographs of the city’s architectural masterpieces; endless mementos from different soccer teams and tournaments; odes to Maradona; packets of yerba mate and alfajores on shelves high above; and of course, photographs of Pope Francis.

The Ferrari of Foods

The cuisine in Argentina is very much influenced by those who emigrated there, including large numbers of Italians and Spaniards.

One glimpse at the menu reveals top quality ingredients: creamy, oozy burrata flown in from Napoli, prosciutto from Parma, Mediterranean Sea salt, Spanish saffron. The list of more than 300 wines includes an extensive Argentine selection: from a 2011 Malbec from Bodegas Catena ($18/glass, $60/bottle), to premium wines like a Chateau Lafite Rothschild 2005 for $3,800.

For Argentine owner Ismael Alba, sourcing the highest quality is simply a matter of pride. “I feel proud of what I do,” he said. “I buy the best of the best.”

Buenos Aires may be using the “Ferrari of the foods,” as Alba said, but there is nothing precious about the restaurant or the dishes. The presentation is rustic, not fancy; there are no tablecloths; in the summer the back patio overlooking the garden fills up.

For a while, no reservations could be made; it was first come, first served until people complained about it.

Elsewhere, going out for a steak dinner might be considered a special occasion; but for Argentines, beef is simply an everyday thing.

There is such a culture around its consumption that even the Argentine cuts are different from what we are familiar with here in the United States.

Short ribs cut across the bone (flanken-style, quite similar to Korean-style short ribs) get the grilling treatment (asado de tira, 16 ounces, $27.95). It’s a meaty cut, with some chew to it, and super flavorful, due to its fattiness.

For those who prefer a leaner cut, the skirt steak was spot on (and my favorite): surprisingly tender and flavorful at once. The media entraña, at 10 ounces, is a great value at $22.95; the 16-ounce entraña, is so long it won’t fit on an oblong plate without some skilled origami ($29.95).

All the boneless cuts hail from grass-fed beef in Uruguay (beef imports from Argentina are banned).

Add a side of fresh, cut-to-order fries, and you’re set. You can choose either regular fries ($4.95) or fries sprinkled with garlic and parsley, the papas à la provenzal.

They’re both excellent, but I preferred the regular fries, because there’s another special item, also made with parsley, that I wanted to drench my steak with: chimichurri.

This famous Argentine sauce, developed over time at Buenos Aires, consists of 14 ingredients, including not only parsley and garlic, but also leeks and different types of vinegars and oils.

My dining companion enjoyed it so much she poured it over everything, including the addictive, crusty bread, and speculated on what else it would go well with (the cheeses, maybe? The burrata, maybe… the gorgonzola, not so sure.)

There’s also the salsa criolla, which also goes wonderfully with steak: made with green, red, and yellow bell peppers, and onions.

Downstairs, the kitchen is almost the size of the dining room above it—Alba calls it a little factory. Empanadas are baked here daily, the pasta sauces simmered, and the beef is butchered and cut on an impressive commercial meat cutter.

The “little factory” churns out some of the best empanadas I’ve ever eaten in the city, with a shell so thin it’s almost translucent, and bold, savory fillings: spinach and cheese; hand-cut meat (carne cortada a cuchillo); mozzarella and onions.

There are plenty of other appetizers, including a decidedly Spanish, tapas-style shrimp in garlic sauce that came sizzling in a clay pot. The thin fried slivers of garlic gave the dish a wonderful sweetness ($14.95). I also tried a very Argentine dish, the very hearty provoleta, which was grilled provolone cheese, served with fresh tomatoes, and also served sizzling in a clay dish ($16.95).

Hot appetizers from the grill are also typical, and yes, they’re all meat, from grilled sausages to sweetbreads to blood sausage.

If you conceivably have any room left (some people always seem to), dulce de leche, a traditional Argentine sweet made of milk and sugar and heated to a consistency of a creamy, caramelized spread, figures in a number of desserts. My first thought was: call the dentist. But those with a sweeter tooth than mine will enjoy the panqueque, a thin crepe that encases a generous offering of dulce de leche ($7). Even the flan, robust and made with organic eggs, comes with a side of it upon request ($7.50).

Buenos Aires is Argentine through and through. The idea was born eight years ago, when Alba and his wife, Karina de Marco, thought about how they always headed to Queens for Argentine food (specifically to El Gauchito in Corona). Why not open an Argentine restaurant in Manhattan?

It’s somewhat of an oft-told story how de Marco, who grew up in Argentina, first went to medical school, following the “mandato familiar,” in the footsteps of her surgeon father; then switched to law school, and with credits to go, decided to graduate in psychology instead. But all throughout, cooking has been her passion.

Both Alba and de Marco are idealists who believe in treating people well, and that money doesn’t buy happiness.

Alba shows me his coat. It is cashmere, but it’s also 17 years old and frayed here and there. “I don’t care. I’m happy you know. You can see it’s old. I don’t need more.”

There’s both humility and pride there.

It’s inevitable that with his clientele, Alba turns to talk of politics but in the end, he said, “I don’t believe in systems. I believe in individuals.”

During one of my visits, on a calm afternoon, I met Buenos Aires’s first customer, John Osburn.

Osburn, who teaches drama at NYU and Cooper Union, has traveled to Argentina to practice his Spanish, and he’s also an avid tango dancer. “I have friends who say I’m more Argentine than they are,” he said.

He used to live in the neighborhood. Eight years ago, he heard Buenos Aires was opening and got excited.

On opening day, he showed up for lunch, only to realize the restaurant was only open for dinner back then.

Alba, he recalled, was outside leaning against a car, and saw his look of disappointment.

“He said, ‘Come on in’ and he turned on the lights. … He literally opened the restaurant for me,” said Osburn, who regularly orders the ojo de bife, a 16-ounce boneless rib eye steak.

Although he doesn’t live in the neighborhood anymore, Osburn still eats here regularly, and he finds the restaurant “the most reminiscent” of Argentina that he’s found in town. “It’s very, very evocative of Buenos Aires. A lot of Argentines that I have met through tango come here.”