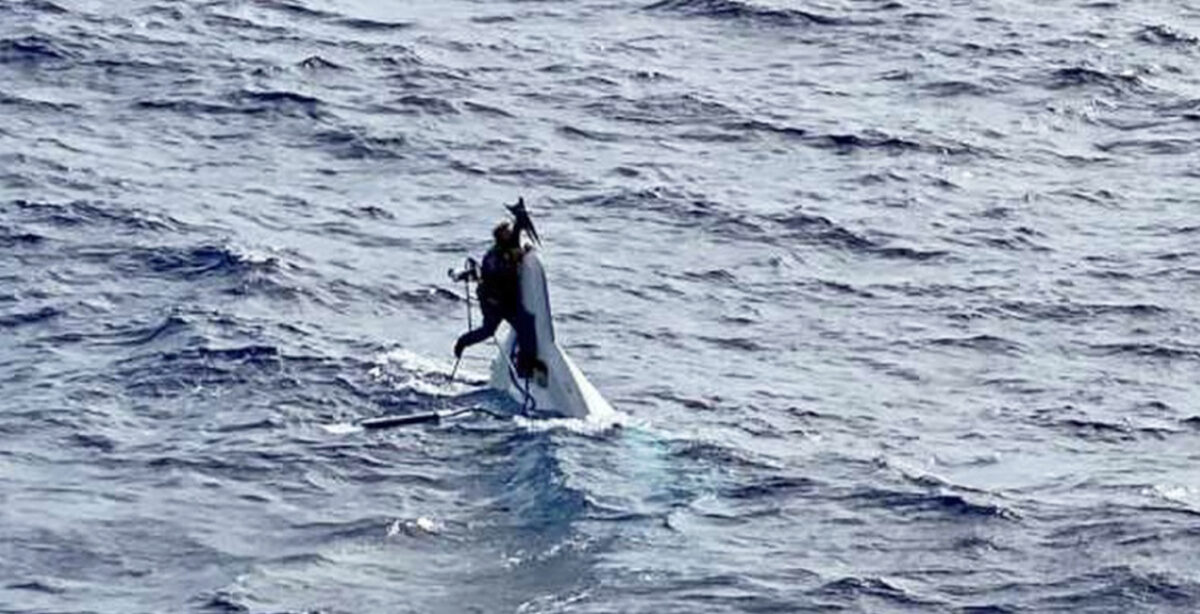 Missing Sailor, 62, Found Clinging to the Bow of His Capsized Boat After Almost Two Days

A missing sailor was luckily found alive, 86 miles off the Florida coast, after clinging to the bow of his sinking boat for almost two days.

Boater Stuart Bee, 62, launched his 32-foot motorboat, “Stingray,” from Cape Marina in Port Canaveral on Nov. 27, according to a U.S. Coast Guard news release. His family raised the alarm the following day, claiming it was out of character for Bee to remain at sea overnight.

Watchstanders at Coast Guard Sector Jacksonville sent a search-and-rescue team to find Bee, including a Hercules C-130 aircraft from Coast Guard Air Station Clearwater, but to no avail. An Enhanced Group Calling was issued to mariners located in the vicinity of the search area of the possibility of a lone sailor in distress.

The errant sailor was then eventually spotted by the crew of a 225-meter container ship, named Angeles.

Bee, seeing the container ship on the horizon, had removed his shirt and waved it in the air to catch the crew’s attention. The crew lifted Bee from the water, miraculously unharmed, around 11 a.m. on Nov. 29, according to details released by the coastguard, the Daily Mail reported.

Merchant mariner Lacruiser P. Relativo, on board the Angeles, gave Bee his “lucky shirt,” and after a hot meal took a photo with the boater for posterity.

“I wish him the same comfort this shirt has given me during those tiring job interviews,” Relativo wrote on Facebook. “Just like him, I was lucky to get the job. He was lucky too that our course crossed near Atlantic.”

Relativo regaled being woken up by an urgent call to rescue someone that day. “As merchant mariners, we were trained to the toughest degree of distress that can possibly happen at sea,” he explained. “However, the actual scene [is] often different.”

Bee, he recalled, asked what day it was before anything else. “By the look on his face, I saw his teary eyes as he made sign of the cross,” said Relativo. “He was drifting in the open sea for days, maintaining his stance at the top of his capsized boat.”

Any movement, Bee deduced, may have triggered his vessel to sink below the waves.

It was later discovered that “Stingray” had suffered a mechanical failure sometime on Nov. 28. Shortly after midnight, Bee was woken by the force of the water rushing into the forward cabin, pushing him out of the front hatch and onto the bow to cling on for his dear life.

“Saving lives at sea is our highest calling,” Captain Mark Vlaun, commanding officer of USCG Sector Jacksonville, said. “This is a truly incredible outcome that demonstrates the bond among all mariners and our community.”

In an updated news release on Nov. 30, the USCG revealed that they were monitoring Bee’s progress as he sailed with the Angeles crew to their next port of call—Wilmington, Delaware—where the boater would meet his brother and be safely escorted back home to Florida.

Lieutenant Shawn Antonelli, USCG District 7’s command duty officer, claimed that the chances of finding Bee alive were slim. “But he was able to stay with his boat,” he marveled, “which helped save his life.”