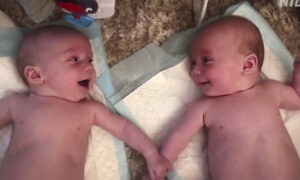 Video: 4-Month-Old Twin Brothers 'Meet' Each Other for the First Time and It's Adorable
0
Share Now
TelegramFacebookTweetEmailTellMeWeReddit
Copy Link 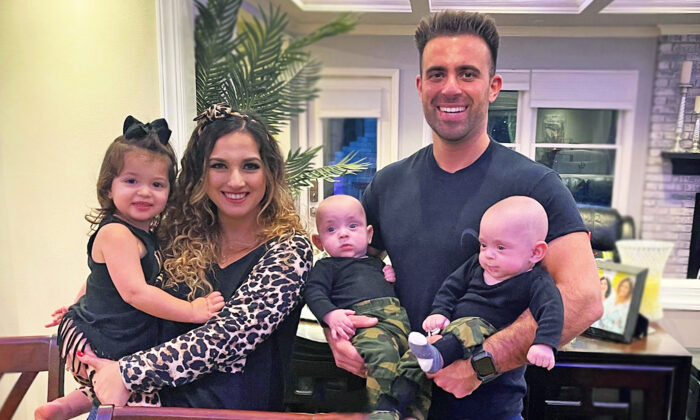 A set of premature twins didn’t meet outside the womb until they were 2 months old. However, together, they had already survived an in-utero surgery, a rare and dangerous condition, and a protracted stay in the NICU amid the COVID-19 pandemic.

Now 8 months old, both Pauly and Vinny Salmonese are thriving. Their parents, Dana and Joe, of Huntington, New York, couldn’t be prouder of their “miracle baby fighters.”

Speaking to The Epoch Times via Facebook, Dana, 30, described her baby boys as “doing amazing … They’re making almost all of their milestones,” she said. “They’re so happy, and love to eat!”

On New Year’s Day 2020, Dana and Joe, who share a 2-year-old daughter, Gianna, were shocked to discover they were expecting twins, as neither of them had twins in their lineage. After 13 weeks of gestation, Dana shared the exciting news of expecting twins on Facebook.

However, just a day after the post went up, Dana was woken up in the middle of the night with gushing blood.

“It was the scariest moment of my entire life,” she told People. “There was no doubt in my mind that I was miscarrying.”

The couple immediately rushed to the hospital. It was then discovered that the bleeding was caused by a condition called a subchorionic hematoma, a pooling of blood between the uterine wall and chorion. The twins were given a 50 percent chance of survival, and Dana was sent home on strict bedrest.

Dana then hoped for a “normal pregnancy” after making it to 17 weeks as the bleeding stopped, but a routine sonogram identified a new cause for concern.

“[One baby] was looking like he didn’t have much room at all, and he was still,” Dana recalled looking at the sonogram. “The other one was floating and he had all this room, and his arms were up and kicking all over and I couldn’t feel any of it.”

“[O]ne was getting too much blood and one was not getting enough,” Dr. Chavez explained, “so we use a laser to close these abnormal connections, allowing the pregnancy to continue as far along as possible, and as safely as possible.”

It was determined that without surgery, Dana and Joe’s babies only stood a 10 percent chance of survival. “It’s risky to go into the womb with 18-week-old babies, but it would be even more risky not to,” Dana reasoned.

The surgery was successful despite complications from Dana’s hematoma. Yet two weeks later, her water broke.

“This pregnancy has pushed me to the edge, and the only way I know how to cope is through my faith,” Dana wrote at that time.

Without contractions, Dana stabilized and was sent home; the hospital’s maternity floor was fast becoming an emergency ward as the CCP (Chinese Communist Party) virus, commonly known as the novel coronavirus, engulfed the city. Joe, a first responder, was on the frontlines of the relief effort of the outbreak of the virus, going to extreme measures to protect his wife from the virus at home.

As Dana made it to 24 weeks, family, friends, and fire trucks from Joe’s fire station formed a drive-by convoy in celebration.

“I was so happy,” Dana told People. “I knew I was giving birth to babies that wouldn’t have to die in my arms.”

At 28 weeks, Dana was readmitted to the hospital, where doctors rallied to delay active labor. At 31 weeks, however, Dr. Chavez noticed that the smaller baby was no longer feeding, and he thus scheduled a cesarean section.

Baby Vinny, weighing 4 pounds 1 ounce (approx. 1.84 kg) was born first. Pauly, weighing 2 pounds 9 ounces (approx. 1.16 kg) emerged later. Both the boys were whisked to the NICU for blood transfusions and respiratory support after all they had been through in the womb.

“[T]hose doctors and nurses … They are geniuses,” Dana praised, “and they know how to push your babies without pushing them too hard.”

The babies fought hard, growing stronger and healthier by the day. On Aug. 10, they met for the first time outside the womb, and Vinny went home with his mom and dad. Pauly, smaller yet equally determined, followed weeks later.

“It’s such a miracle,” said Dana. “They’re both doing exceptionally well,” said Dr. Chavez, adding that it was nice to see some “typical sibling rivalry” between the growing boys.

A video of Dana and Joe’s beaming babies even went viral on TikTok, captioned “morning smiles.”

With unpaid hospital bills and future physical therapy for the twins, Dana and Joe started a GoFundMe campaign to help them handle the financial toll. Ten percent of the money raised, they said, would also be going to the Twin-Twin Transfusion Syndrome Foundation, and an additional 10 percent would go to Winthrop Hospital’s NICU.

“We are so grateful for all the prayers and support we have been receiving and hope our story inspires you to dream big, even if that dream seems impossible,” wrote Dana. “God’s grace and power is absolutely amazing.”