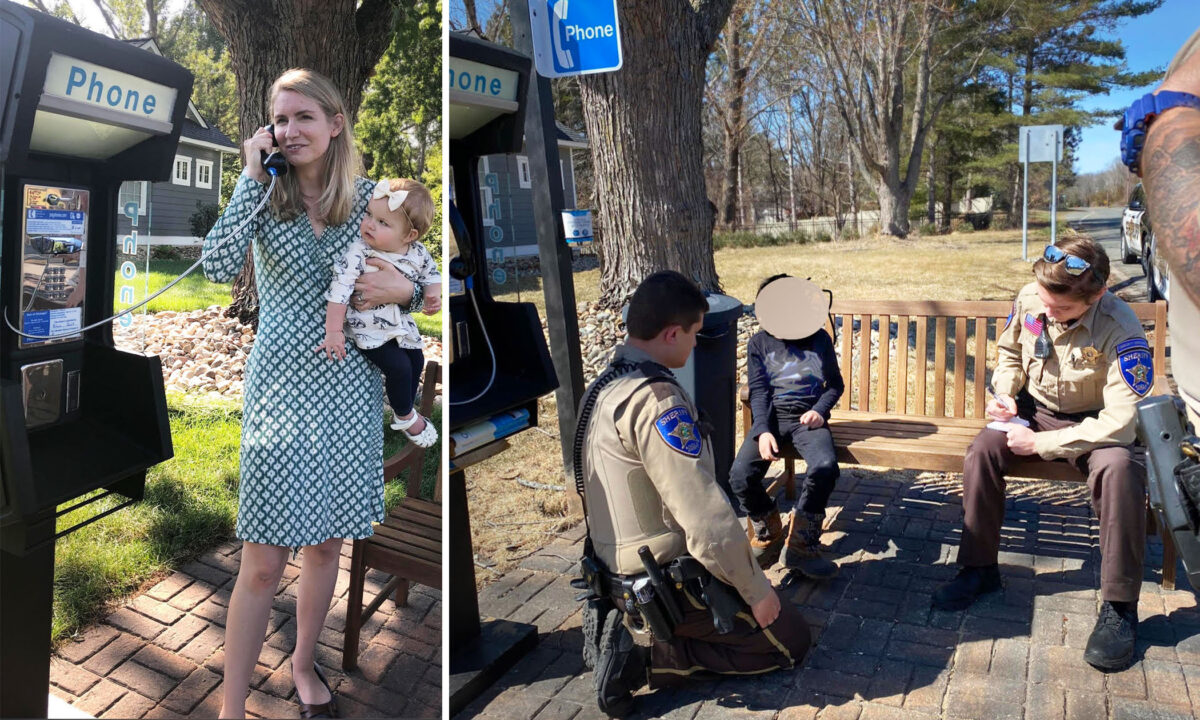 A man from Minnesota hoped to offer his neighbors a “blast from the past” by installing a fully functioning payphone in his front yard.

The novelty not only served the purpose of making unsuspecting bystanders smile; it also saved the day for one lost little boy, who dialed 911 on the old push-button public phone and found a way home.

Andover native Brian Davis, 48, said he was impelled to install the archaic device for a “little bit of fun,” to “just remind people what life was like before we were all on our cellphones.”

Locating a local seller online, he made a trip to nearby Waverly to pick up the wares—which weren’t in the greatest of shape, he admitted. But finding a company in Texas that was able to replace some of the parts, he was able to refurbish the antiquated device.

Davis was a bit baffled by the outdated phone at first; for some reason it wasn’t working. But he got in touch with his more landline-savvy parents, and figured out how to wire up the contraption.

“We hooked it up to their landline,” Davis explained. “We figured out the problem was I wasn’t adding the coins first.

“I thought you dialed the number first—that’s what I thought I remembered—and then you add the money.”

As for the front yard installation, he admitted having some initial reservations.

“Honestly, I was a little nervous,” Davis said. “I kind of thought some of the neighbors would have thought I was a little crazy or something. So when I installed it, I actually put a big moving blanket over it.”

He had to run the phone lines underground and install a concrete base so that would-be thieves wouldn’t be able to yank it out; but it was worth it.

“When I knew it was a go, I took the blanket off and kind of walked away and smiled,” he said.

All set up and running, the coin-op now garners double takes along the street in front of Davis’s house. It isn’t raking in much cash, but has yielded smiles on many a face of those who remember the good old days before the advent of smartphones.

Davis said he’s seen people taking pictures with the payphone and even a few using it. Earlier this month, he spotted a young boy playing alone near the installation.

“I saw him out there talking on the phone,” Davis said. “I know that you can dial 911 on the phone. … I decided to go out there because I thought the odds of him having four quarters was probably pretty rare.”

The boy had been visiting his grandparents; when somehow he’d gotten lost, he managed to dial 911 on the phone, said Davis.

“I go back in the house, and a minute went by and there was a police officer outside of the phone,” he explained. “Within a couple minutes, a couple more squad cars showed up.”

Davis said the boy’s grandparents were out looking for him; upon seeing the commotion, they stopped by, found the boy, and took him home.

Now, besides just teasing smiles from neighbors while offering Davis endless entertainment, the payphone has resolved an emergency of sorts.

The Andover man wonders if the idea could catch on. “I would recommend it,” he said, “maybe having some miscellaneous people [with payphones] throughout the city isn’t such a bad idea.”