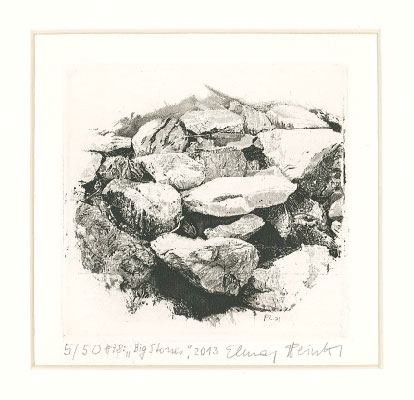 Miniature Prints: Small in Size but not in Stature

The Ottawa School of Art’s Fifth International Biennale of Miniature Prints is currently on display at the school’s downtown campus on George Street in the old Market.

It is a large, comprehensive exhibition of small prints from all over the world—the work of 110 artists hailing from 25 countries comprising more than 270 works of art, each an example of the best in contemporary printmaking today.

The artists’ subject matter runs the gamut from city scene to landscape, portraiture to ancient myth.

“Breiz,” an intaglio work by Armelie Magnier of France, appears to be a quiet scene. Hills and clouds are far, far away, but nearby a ruled, rough white plane dominates the foreground. The artist, originally from Brittany, writes that she takes her inspiration from the “land, river-breaks, earth, and story.”

Elmer Peintner of Austria, too, looks to the land for his compositions. His etching, “Big Stones,” is a haunting study of rocks, broken rocks, deeply shadowed.

Droll bits of animal life in the tradition of Beatrix Potter abound throughout the exhibition. In “Shell,” a tiny mezzotint by Canadian printmaker Patrick Balas, a small white cat considers a small snail. They are almost nose to nose. Or perhaps it is that the snail considers the cat.

Similarly, in the etching drawn by Margaret Beatrice Becker of Ireland, we see a bird in a tree looking at berries overhead. Will the bird eat them? Who knows? We have no doubts, however, about the outcomes in Canadian artist Sue Todd’s four amusing linocuts: “Moose on Skates,” “Beaver with Hockey Stick,” “Loons in a Canoe,” and “Polar Bear on Snowshoes.”

Whatever technique the printmaker uses, artists who are printmakers are a patient, thoughtful lot because, as artist Lindsay Graham of England writes, “You never really know what you will get until the paper is peeled away.”

Barbara (Babisua) Fallini of Italy poignantly paired two etchings, each made with two plates. One is a medical drawing of the bones of a human ribcage, its red heart boldly visible, titled “(Inside) Me.” The second etching, “Around Me 3,” is an austere contemplation of angled power lines and two hydro towers against a pale blue sky with a few thin clouds.

An intaglio print titled “Tower of Babel IV” by Pawel Delekta of Poland asks us to look around and down the street. Rising before us, we see a massive tower, watching. Its black and white lines crowd together a jumble of houses, churches, archways, spires, and windows. We know how that story ends.

But we do not know the ending of another story illustrated in a linocut by Kristina Norvilaite of Lithuania. Titled “Passin II, I am waiting,” it is the profile of a woman’s head turned away. Norvilaite is a book artist with 80 published books to her credit.

Bela Bhatt of the United Arab Emirates, on the other hand, worked a classic profile of a human head into a cutaway drawing of brain and muscle—compartmented into rows of matter. A mixed-media print, the image is titled “Left Brain.” The left brain, we recall, is the supposed rational, logical side of the human brain.

The exhibition also includes 20 works from the Ottawa School of Art’s permanent collection. Each was a purchase prize from one of the school’s four earlier printmaking biennales.

Ottawa School of Art’s Fifth International Biennale of Miniature Prints will be on display until June 1.