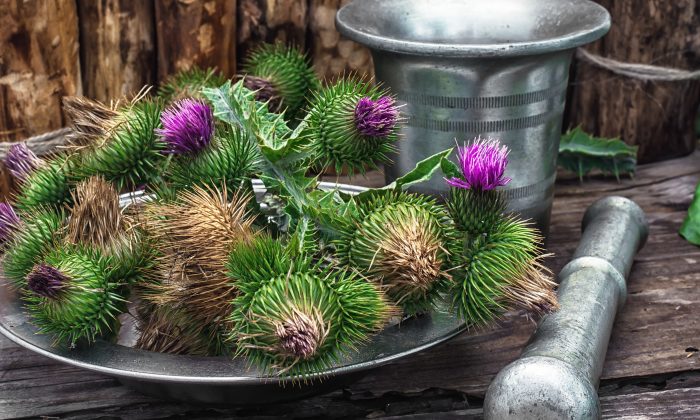 In many ancient cultures, spiky plants known as thistles are a symbol for protection and respect. But there is much more to these weeds than just prickly barbs.

Milk thistle in particular has been used by doctors for at least 2,000 years as a remedy for protecting, unblocking, and rejuvenating the liver.

Milk thistle gets its name from the white veins on its leaves.  It has bright pink or purple blooms that turn to downy tufts in the late summer to carry its seeds aloft in the wind. The botanical name for milk thistle, Silybum marianum, comes from the Greek word “sillybon” meaning “tuft.”

In the 1960s, German scientists identified a group of flavonoids in milk thistle known as silymarin. Silymarin is now regarded as the active ingredient that gives milk thistle its liver healing abilities.

Silymarin is found in greatest concentration in the seeds, which are harvested in late summer to early fall, just before they mature.

But you don’t need extreme liver problems to benefit from milk thistle. Everyone’s liver can use a little help now and then.

The liver serves as our body’s filter, sifting out poisons, excess hormones, and other impurities from our blood. The liver also produces bile to help us digest fats and proteins. When this organ gets clogged, a variety of ailments can result, such as headaches, menstrual problems, systemic inflammation, hemorrhoids, varicose veins, and digestive issues—all of which people use milk thistle to treat.

7 Ways to Love Your Liver

To ancient doctors, indications for liver problems extend beyond the physical body into the realm of the mind and spirit. In traditional Chinese medicine, for example, the liver and gallbladder are responsible for the free flow of qi (energy) throughout the body. According to this system, stagnant liver qi often manifests as anger, frustration, and depression.

A similar idea was described in Europe the late 1500s, when London-based herbalist and botanist John Gerard declared that milk thistle was the “best remedy that grows against melancholy diseases.”

Milk thistle has several features that make it particularly liver friendly. This antioxidant rich herb has been shown to regenerate liver cells, strengthen cell walls in the liver, reduce inflammation in the liver and gallbladder, and dissolve gallstones so that bile can flow freely.  Silymarin has also been shown to increase production of glutathione, an amino acid complex that helps the body with numerous processes and protects cells against toxins.

Given milk thistle’s liver protecting prowess, some people take the herb daily as a way to guard against environmental toxins, such as pesticides, car exhaust, and cleaning chemicals.

Because alcohol abuse is notoriously hard on the liver, it’s easy to see why milk thistle is often recommended to those who drink too much. Studies on silymarin have shown significant improvement in liver function for those suffering from mild alcohol related liver disease, but it has proved less effective for advanced cases.

In ancient Europe, milk thistle was promoted as an antidote to snake venom and other poisons.

For those who only occasionally indulge, milk thistle extract can help them avoid a hangover.

In ancient Europe, milk thistle was promoted as an antidote to snake venom and other poisons. Today, a growing number of doctors believe that silymarin may offer the best protection against the potentially lethal death cap mushroom (Amanita phalloides) and other highly toxic mushroom varieties.

Researchers believe that milk thistle works by blocking toxins from entering the liver cells or removing them from the cell before they cause damage.

Silymarin and other milk thistle-based phytochemicals have shown promise in preliminary studies to guard against certain types of cancers, such as those of the skin, tongue, bladder, prostate, colon, and small intestine.

According to the National Cancer Institute, research on milk thistle shows the herb has the potential to make chemotherapy less toxic and more effective, slow the growth of cancer cells, and help repair liver tissue.

For such a powerful herb, milk thistle has a rather mild taste—nutty and little bitter. The U.S. Food and Drug Administration recognizes milk thistle as safe and non-toxic. However, there may be a reaction for those who are allergic to plants from the composite family (sunflower, daisy, aster, etc.)

In Germany, where most of the research has been performed, doctors recommend using milk thistle extracts that are standardized to 80 percent silymarin. Since silymarin is not water soluble, a milk thistle tea won’t supply any of this complex, but there are other valuable constituents in this herb that water can extract.

Contact a qualified herbalist to see how much and how best to use this herb for your particular condition. For everyday liver protection, however, just follow the dose on the bottle. You can take milk thistle alone, or combined in a formula with dandelion, fennel, bupleurum, turmeric, or other herbs with a reputation for liver cleansing.

Another way to take milk thistle is to eat it. This herb has been a source of food in parts of Europe for hundreds of years. Leaves trimmed of their prickles are a nutritious green vegetable. The root can be roasted or boiled. The seeds can be brewed to make a coffee-like beverage. The stem is reportedly superior to the finest cabbage, and the immature flower head, which looks just like a small artichoke, can be consumed in a similar fashion.

5 Ways to Strengthen Your Liver