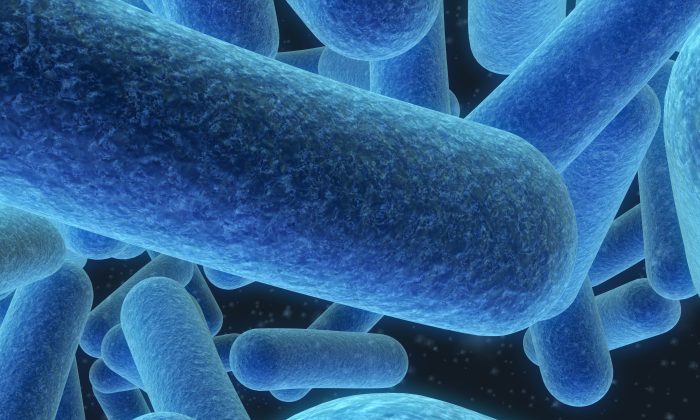 The microbiome orchestrates a multitude of functions within the body. Dr. Raphael Kellman shares how to create the best conditions for it to thrive.
By Conan Milner

In the 21st century, researchers discovered a new organ in the human body. But unlike the heart, brain, lungs, and other previously recognized anatomical structures, this organ isn’t made of human tissue—instead, it consists of trillions of bacteria. It’s called the microbiome.

Our bacterial brethren live throughout our bodies, but the majority of the microbiome, about three to five pounds worth, lives in our intestines. Researchers have linked several intestinal diseases, such as colitis and irritable bowel disease, to an unhealthy imbalance of gut bacteria.

But microbiome problems aren’t just restricted to the gut. Researchers now believe that this imbalance, called dysbiosis, may be at the heart of numerous health issues, from diabetes and obesity to anxiety and depression.

This new understanding of human physiology connects to an old idea about health. According to the renowned ancient physician Hippocrates, “All disease begins in the gut.”

Manhattan-based microbiome medicine pioneer Dr. Raphael Kellman agrees. As a board-certified physician and functional medicine practitioner who has specialized in intestinal health for nearly 20 years, Kellman suspected that the gut was at the root of many health issues long before the microbiome became such a hot topic. He wrote the first book on using a microbiome-friendly diet to help restore gut health and overall well-being.

Today, he’s convinced that effective treatment of any disease must be mindful of the microbiome.

“The microbiome is the missing link—[that’s] why people are not getting better,” he said.

The microbiome is the missing link—[that’s] why people are not getting better.
— Dr. Raphael Kellman, board-certified physician and functional medicine practitioner specializing in intestinal health

Autoimmune problems, inflammatory disease processes, and even symptoms that defy standard diagnoses (like brain fog) can all be traced back to an imbalance in our gut microbes, says Kellman.

The microbiome serves many functions. Our gut bacteria produce hormones and neurotransmitters that our bodies require for emotional stability and cognitive function. They also adjust the immune system, switch genes on and off, and send messages to the brain via the vagus nerve.

Kellman describes the microbiome as the control center of the body because it regulates so many processes.

“When the bacteria make an action, they don’t just do one thing, they make an untold number of changes,” he said. “It’s like a super computer. I call it ‘the great conductor.'”

However, when this bacterial control center is on the fritz, all kinds of things can go wrong. Research finds that dysbiosis may be related to disorders as diverse as alcoholism, chronic fatigue syndrome, and fibromyalgia.

“When the great conductor can’t do what it has to do, you get widespread problems,” Kellman said.

The most common form of medicine targeting the microbiome is called fecal microbiota transplantation (FMT). The procedure sounds crude—transferring one person’s fecal bacteria into another person’s gastrointestinal tract—but it has demonstrated remarkable success in resolving infections from virulent bacteria like Clostridium difficile when nothing else can.

A 2016 report from the Yale Journal of Biology and Medicine concludes that FMT may also help address conditions including obesity, diabetes, and metabolic syndrome.

But Kellman believes that there are other means of treating the microbiome. They may not change bacterial composition as fast as FMT does, but Kellman suggests that smaller, subtler changes are more in line with the language of the gut and may lead to more lasting benefits.

“The bacteria have a very intricate communication, and it’s in so many different directions,” he said. “There’s no drug or combination of drugs that will ever be able to do that.”

The focus of Kellman’s treatment is about creating the proper conditions so the microbiome can balance itself out.

Patients often believe that taking probiotic supplements (pills that contain specific strains of beneficial bacteria) is the first step in setting the microbiome straight. But Kellman disagrees. He says these pills can be useful in fixing particular imbalances, but it’s challenging for most people to use them correctly.

“You need to know how the bacteria work and how they work together,” he said. “You have to know which probiotics will help which disorder, and the problems that will arise if you mix them up.”

While supplements can help resolve certain problems, there is a much larger lifestyle picture to consider in ensuring microbiome health. Kellman’s treatment focuses on creating the proper conditions so that the microbiome can balance itself out.

“You want to get the microbiome to grow and develop and become more integrated on its own,” he said. “It’s always better.”

What Upsets the Conductor?

Modern medicine did not develop with the microbiome in mind, but new insights are prompting many health professionals to rethink their treatment strategies.

For example, prior to the discovery of the microbiome, little thought was given to the breadth of side effects now associated with antibiotics. Back then, the presence of bacteria primarily meant disease, so doctors were only familiar with the positive aspects of these drugs.

The microbiome concept, however, imagines a much more complex picture in which bacteria can be good, bad, or out of balance. Since antibiotics don’t just target the bad bacteria, excessive use of these drugs can be detrimental to our good bacteria too, leading to long-term dysbiosis. A 2015 study published by the American Society for Microbiology found that one course of antibiotics can upset the gut microbe balance for up to one year.

Due to the ubiquity of antibiotics, both in medicine and in the animal products we eat, these drugs tend to get most of the blame for harming our microbiomes. But Kellman points to other culprits that can throw our conductor out of whack.

Diet, for example, plays a major role in the health of the microbiome. And it’s not only about improving a poor diet or avoiding processed foods, he says, but about eating specific foods that promote health.

“The bacteria have a desire for certain foods, but we’re not listening to them,” Kellman said.

Fermented foods, such as yogurt and sauerkraut, are often called probiotics because they contain bacteria that are beneficial to our microbiome. But there’s another class of foods, called prebiotics, that help feed the bacteria that’s already there. That’s why Kellman wrote the book “The Microbiome Diet: The Scientifically Proven Way to Restore Your Gut Health and Achieve Permanent Weight Loss.” He recommends a diet rich in radishes, leeks, jicama, asparagus, and garlic. These plants are full of prebiotic fiber.

Feeding the microbiome is important because even good bacteria can turn against you if they lack proper nutrition.

Human cells can’t digest this plant fiber, but bacteria can. Feeding the microbiome is important because even good bacteria can turn against you if they lack proper nutrition. Bacteria starved for fiber feed on the gut wall instead. This makes the intestines porous, allowing toxins and undigested food particles to leak into the bloodstream. Kellman says pesticides and other toxins in the environment also contribute to a leaky gut.

“For some people, it’s gluten, because it can definitely affect the gut wall,” Kellman said. “Then you get inflammation.”

Links to Chronic Inflammation and Stress

While most doctors look primarily at stool samples for evidence of dysbiosis, Kellman looks for inflammatory markers in blood tests to observe problems in his patients’ bacterial composition.

Chronic inflammation has been linked with many modern illnesses. While a poor diet and lack of exercise contribute to inflammation, so does stress. Our bodies are designed to bounce back from momentary stress, but unrelenting stress over weeks, months, or longer is notorious for accelerating disease. A growing body of evidence suggests that stress is also a major factor in the health of the microbiome.

Childhood trauma is particularly harsh on the microbiome, Kellman says. He is currently working on a new book examining the parallels between the gut and the brain, and says traumatic experiences may play a bigger role than previously thought.

“The microbiome develops at an early age. That’s why people who experience childhood trauma are much more susceptible to autoimmune diseases,” he said.

Other research has supported the idea that childhood trauma contributes to a proinflammatory state in adulthood. In a report last year from the Canadian Journal of Psychiatry, researchers wrote that stress-induced alteration of the gut microbiome early in life “may elicit long-lasting immune consequences and increase the risk of developing stress-related disorders later in life.”

Our current understanding of the microbiome is still in its infancy, and further research promises to bring more insight on how this bacterial organ works. But Kellman says the concept is already changing medicine for the better. If everything we take in—food, drugs, toxins, and even emotions—can alter our bacterial conductor, it means we must consider the bigger picture and take a more holistic approach to treatment, he says.

“Researchers are seeing that it has such a profound effect on every organ and every disease they identify,” Kellman said. “When you heal the microbiome, it has an incredible ability to orchestrate health on so many levels.”