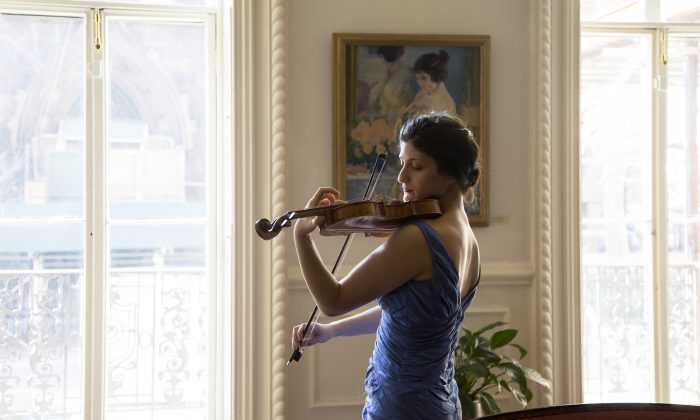 NEW YORK—Classical violinist and composer Michelle Ross works surrounded by paintings, as the only musician among a group of visual artists.

When she composes, she does so as a resident artist in the Eleventh Street Arts gallery, adjacent to a workspace shared by painters and sculptors who have broken from the norm by creating representational art in the traditional style.

“There’s a sense of almost an electric energy, with everyone working together and trying to lift each other up,” Ross said of the connecting Grand Central Atelier (GCA), the art school that owns the gallery and focuses on training in the classical tradition.

It was a relief to find so many contemporary artists who are looking to the past and dedicating their lives to perfecting their craft, to attaining something ideal, just as classical musicians have done by playing Bach for hundreds of years.

“We’re all modern, contemporary, living, breathing artists,” she said, but “to acknowledge that this is classical in the sense of the tradition and the amount of depth that goes into learning the craft and being able to communicate with it, … [with the camaraderie], we have this constant reminder of how and why what we do is relevant.”

These artistic traditions provide a depth crucial to humanity, she added.

“I think people now really, really crave substance, whether we know it or not,” she said. “People want something with depth. We’re really craving it as a society.”

Technology has made things easy for us, but without being aware of this, we let habits take over instincts and function in a way that is unnatural and not what humans really want to be, she said. Communication becomes distilled, detached, or passive.

“I remember when I first got an iPhone, I was very conscious of all those strange moments—’oh, I’m texting, but am I really talking to this person?’—but now that consciousness has gotten smaller and smaller, and I just accept it now,” she said.

Traditional arts, on the other hand, demand something from you—emotional honesty, engagement as a listener or viewer, or dedication to your craft as an artist. Once you’ve been opened up and have encountered that depth, you’re primed to reconnect with the world and others in a way you weren’t before, she said. “[You see] a new perspective, or it’ll capture your imagination and unlock this whole world that’s out there, and it can really transform you.”

Pianist David Dubal: The Classics Are a Balm for Our Spiritual Wounds

For her personally, the initial reaction to such depth is visceral; it gets at your heart. Then there’s the intellectual exercise, the immaculate structure, proportion, and architecture of the classical form, like what is found in the work of both Bach and great Renaissance painters, she said.

In her own way, she is on a mission to use music to help people to connect.

At the gallery, Ross curates a concert program as well. Many attendees are the artists working adjacent to her in the atelier, and after each concert there’s a Q&A session with the performers that sparks conversations about line and harmonic proportions and the overlaps between these classical forms.

“The energy is totally intoxicating for everyone,” she said. “It makes me perform in a different way, and for the audience, it’s a heightened experience.”

Discussing art with artists is a highlight of Ross’s residency, but she truly believes in the power of great art to communicate, to speak volumes all on its own.

“I truly believe music speaks for itself,” she said.

In 2012, Ross was awarded a grant from the Leonore Annenberg Fellowship Fund for the Performing and Visual Arts, and she asked herself: What sort of artist did she want to be? What works would get her to that level?

Her answer was Bach because “you really have to bring courage and honesty to this music,” she said. “You can’t hide anything, you’re all by yourself. It’s almost like that idea of climbing the mountain, but every time you think it’s the peak, it’s really a new plateau.”

In addition to recording an album of all the Bach solo works for violin, since 2015 she has brought this music to the people of New York. She played in bakeries and offices, on boardwalks and ferries. The one caveat with playing in public spaces was that she would not do it in a noise-polluted environment, like an underground subway station. It needed to be quiet; otherwise it wouldn’t be fair to either the music or the listeners.

Her experiences proved her hypothesis correct: “You just have to get people in a room and give it to them; that’s enough. This music withstands time.”

She remembers conversations with New Yorkers who did not look at all like they had been listening while she was playing, but were actually quite moved and engaged, and shared their thoughts with her afterwards. She remembers people bursting into applause, the hugs and smiles. In addition to acquainting people on the street with Bach, she was exercising her performance muscles, as the experience was completely different from being removed from people and on a stage.

“Each time was unique and taught me something different about performing,” Ross said.

In the last few years, Ross has worked on growing as a composer as well.

She remembers a time when, as a young teenager, music would just pour out of her, and she wrote easily. Then during her studies at Columbia, she put off composing for a while. The more time that passed, the scarier it was for Ross to come back to it. She feared she had lost her voice, until one rainy day at a music festival when she just sat down at a piano and started playing.

Maybe it was because she wasn’t a pianist, so there was no intimidating inner critic to please, no need to quell her fear for perfection. Ross recorded her improvisations and was glad for it, because even though it wasn’t until months later that she found the courage to listen, she realized then that, yes, she did have something inside her worth saying.

It’s been a journey of writing and improving since then; she continued to improvise and collaborated with other music and dance groups until she built up the confidence to take herself seriously as a composer. Next, she will be taking one of her musical ideas that keeps coming back and sitting down with pen and paper to turn it into a string quartet.

“It’s kind of exciting, scary,” she said. But it’s also reconnecting with the roots of classical music. “In Bach’s time, anyone who played music knew how to improvise, they understood harmony. … In Mozart’s time, you were expected to be able to improvise a cadenza.”

When Mozart wrote concertos, the virtuoso passages were denoted with a rest and it was up to the musician to deliver a solo with some flourish. Later, students requested he write in some passages that sounded improvised. For the concertos he did not write cadenzas for, later composers like Brahms and Beethoven took it upon themselves to do so.

Many of her musician colleagues are, like Ross was, scared to improvise because one sets such high expectations for oneself as a performer, and those carry over to other musical endeavors. She tries to dispel those fears. “I think if you’re a player, music is in you,” she said.

She is consciously working on composing in a traditional style now and sometimes won’t even bring her violin case into the gallery just so she’ll focus on composing, Ross said. It’s an amazing space to work in, surrounded by artists and their work, which seem to say to her, “Get to work!”

“Sometimes I say that I must be the luckiest violinist in New York,” she said.

A Forest of Romanticism

Having spent a year playing mostly Bach, Ross switched lanes and programmed a concert of Romantic music this January. Robert Schumann, Clara Schumann, and Johannes Brahms were on the program she titled “I Bear no Grudge,” from a line of Robert Schumann’s “Dichterliebe” (“A Poet’s Love”), which was performed by baritone John Moore and pianist Adam Golka.

“I want to give them [the audience] the most intense experience possible,” Ross said. For her January concert, the idea was to drop everyone into a 19th-century forest of Romanticism with no end in sight.

Clara Schumann ended up on the program by a twist of fate, she said; Ross and pianist Adam Golka were preparing to sight read some Schubert pieces for the program when she found these pieces by Clara—Three Romances for Violin and Piano—that she had never heard.

Brahms’s Horn Trio and Schumann’s “Dichterliebe” are heavy pieces, and the entire program is Romantic music. But Clara’s Romances contained a delicacy and innocence, being almost ingénue-like in character. This provided a lightness that became Ross’s guide through the heavy program.

The small gallery space was tightly packed with supportive audience members, who created a buzzy atmosphere of anticipation. The discussion afterwards centered on the topic of Romanticism and how artists may find it difficult to embody that spirit (which inundated the program) in today’s world, and the mindset and creative process the musicians undertook to interpret this Romanticism.

“This 19th-century Romanticism seems so very far away from the spirit of our culture,” said Jacob Collins, founder of GCA and leader in the contemporary realism movement, kicking off the discussion.

Moore, who sang “Dichterliebe,” mentioned an earlier experience he had in Munich and Bavaria while preparing Romantic repertoires. “I would hike,” he said. “It’s the earth. Once you walk on the ground those composers and those poets had walked on, it all makes sense. The color of the sky, the mists rising, and those morning of dense fog—it’s just magical.”

Collins offered Ross her residence position after she had played several Bach concerts at the gallery, over a year ago.

“It’s a parallel understanding of art and humanity,” he said. “These traditions came up together, and so for us as painters and draftsmen and sculptors … it’s such a delight for us to hear them and talk with them.”

French horn player Laura Wiener performed Brahms’s Horn Trio in E flat major with Ross and Golka at the January concert. She had been to concerts at the gallery before and found the atmosphere and audience there incredible.

“They’re so engaged and erudite and creative,” she said. They’re inspiring, too, as the artists work for years on end to develop their skills.

“They’re not doing it for any other reason than their own artistry, and that is an incredibly inspirational idea for us,” she said. “As musicians, we work for 10,000 hours to try to be vessels for tradition, and we’ll never be perfect vessels at that, but it’s a limitless quest. Painting is that way, too.”

In the future, Ross envisions bringing in composers to work alongside the visual artists and organizing concerts where the art on the walls was created directly in conjunction with the music performed.

Ross’s album “Discovering Bach: Complete Sonatas and Partitas of J.S. Bach” will be released by Albany Records on March 1.

The next Eleventh Street Arts (46-06 11th St., Long Island City) chamber music concert will be held on May 4.