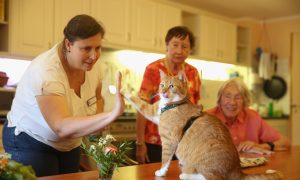 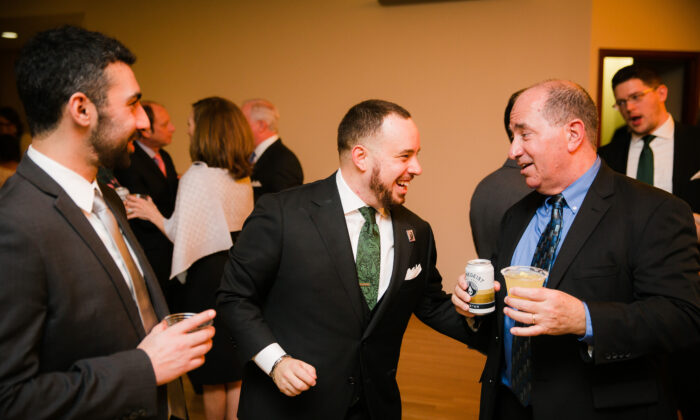 Jay Shifman (C) has dedicated his life to removing the stigma associated with mental health and addiction. (Courtesy of Jay Shifman)
People

Mental health and substance abuse are arguably two of the most stigmatized subjects in our society. The terrible irony is that talking about these subjects is the first and most important step to helping those who are struggling. Jay Shifman experienced confronting both of these struggles, and now he’s dedicated his life to opening the conversation.

“It was pretty much the idyllic childhood for the late ’80s, early ’90s,” Shifman recalled.

When Shifman was 11 years old, he was diagnosed with ADHD, and for the first few years after his diagnosis, he tried a variety of treatments. He was the “class clown” in school and was never a great student, but his ability to focus improved after he was prescribed medication. In the beginning, taking prescribed medication made Shifman feel ashamed and he would only discuss it with other people who were on medication as well.

“It was definitely not the kind of thing that I was wearing as a badge of honor the way that I do now being somebody in recovery,” Shifman said.

Around age 14 he began struggling with depression and anxiety. He felt moody, found himself in a funk that was difficult to escape, and struggled to find joy in everyday life. The anxiety caused him to focus on all of the potential problems and negatives in life, and made him imagine the worst possible scenarios. He also struggled, and continues to struggle, with OCD, which caused repetitive thoughts and behaviors. He discovered, eventually, that the ADHD medication he was taking was exacerbating the issues he faced.

“A lot of it was fueled by these medications I was on,” Shifman said.

Shifman was prescribed antipsychotics and benzodiazepines for these mood disorders when he was 19. By the time he was in college, Shifman began abusing his prescription medications. At a certain point he was on six different daily medications, but he would take well over the prescribed amount and was filling month-long prescriptions in a matter of two weeks. By his junior year of college, he had failed out of school.

By age 22, his addiction had reached a serious level. If he didn’t take a pill immediately in the morning, he would find himself on his bathroom floor going through withdrawal. He eventually resigned from his job as a coordinator at a nonprofit, and he began to lose his friendships as well. The friends that he still had were also using drugs with him, and he found himself smoking marijuana and using cocaine. In the meantime, he could not maintain a handle on his abuse of his prescriptions. Ultimately, he would reach his breaking point.

In summer 2009, Shifman attempted to take his own life for the first time. He had just returned from following one of his favorite bands on tour, and fell into despair. He was disappointed in the life he was living and felt isolated except from people who were also in the throes of substance abuse.

One night, he poured what he thought was surely an overdose amount of pills, and called a friend to tell her what he was about to do. Fortunately, his friends reached him before he could take the pills. The following night, he took the pills before he called the same friend. She called the police, and an officer placed him in handcuffs and led him out of his home before slamming his head into the side of the police car. He was taken to the University of Cincinnati Hospital and remembers being handcuffed to a gurney after he arrived. After that, he didn’t remember anything until the next day.

“The next thing I knew I came to, and I was in a lockdown unit in Cincinnati the next day. I had been out of it for about 24 hours,” Shifman recalled.

After three weeks in the hospital, Shifman was released to his parents, who sent him to a long-term rehabilitation facility in Massachusetts where he spent three months. During his time there, he met other patients with mental health issues and substance abuse. He started to realize that his struggle resembled those who had struggled with substance abuse more than those who had mental health conditions.

“Medication was helping other people. It wasn’t helping me, and it made me start to wonder, was it possible that these [medications] were actually making things worse for me, not better?” Shifman said.

Shifman met with a therapist at the facility and suggested to him that he try to get off of all of the medications he was on. The therapist agreed, however, only under the condition that he try new medication. Shifman wasn’t on board with that plan. His idea about his own treatment was different from what his therapists were recommending, and he checked himself out of the facility after three months.

He was not all well and would still experience detox and withdrawal.

After he checked himself out of the facility, he began driving cross country to live with his grandmother in Cornville, Arizona. On the way, he got into a car accident and found himself alone in Johnstown, Pennsylvania, in a motel on Jan. 2, 2010.

“That’s what I consider my rock-bottom moment, where I sat there on this dirty carpet feeling more alone than I ever had in my life,” Shifman said.

Once he made it to Cornville, he went through a long withdrawal from the variety of prescription medications he had been abusing.

“It was a very trying time physically [and] mentally,” Shifman said.

During this time, Shifman took small steps toward getting through his withdrawal on the path to recovery. At first he struggled to get out of bed, and then after a little while, he was able to walk to the mailbox. With the support of his grandmother, Shifman slowly started to take steps in the right direction.

“I really credit my grandmother because I have no idea what that was like to watch,” Shifman said.

After three months, he was off the medications. Once he was healthy enough to leave his grandmother’s house, he moved in with a friend in Dayton, Ohio, and started working at the family’s coffee shop. The largest milestone for Shifman was when he ultimately graduated from college. It would take five years for his brain to recover, and during that time he slowly started to understand his true self.

He hasn’t touched a prescription pill since spring 2010. He still is able to have a drink, but can control his drinking, unlike his prescription drug addiction, which is an important distinction that Shifman makes. He still contends with anxiety and depression, and works with a variety of therapists to address his mental health.

“It boggles my mind and it makes me incredibly sad when people aren’t even willing to talk about them because it is so shortsighted and so foolish to think if we don’t talk about them, then they won’t happen,” Shifman said.

“Choose your struggle” refers to the fact that for a long time Shifman’s struggle was to avoid withdrawal. Now that he’s in recovery, he gets to struggle for what he’s passionate about, which are the topics of mental health and addiction. He encourages others to choose their own struggle and help them discover what makes them happy and fulfilled.

“I love telling my story because it starts conversations that are incredibly necessary. I believe that any time that we can talk about it we: a) end the stigma, which is the most important thing, and b) it helps change some attitudes,” Shifman said.